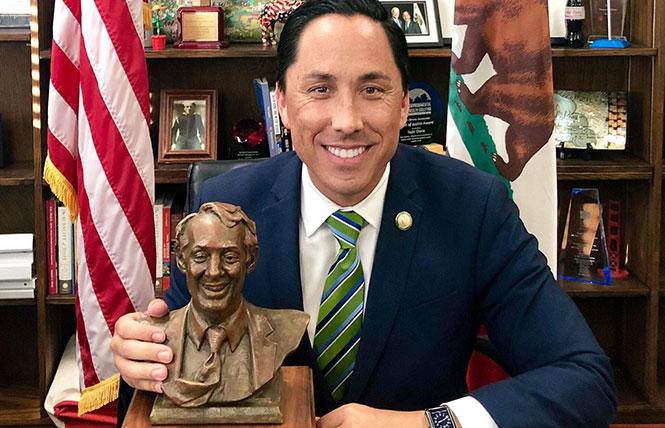 "They are icons who each, I think, contributed to my ability to sit in this room," Gloria told the Bay Area Reporter from the municipal building during a recent Zoom interview.

Inside his office is a painting of Diego, the Chihuahua mix breed Gloria and his partner, Adam Smith, adopted after briefly fostering him last year. Now the "First Dog of San Diego," Diego was rescued from a kill shelter in San Bernardino County by a San Diego nonprofit.

"He is just perfect," said Gloria, adding that the couple ended up asking themselves, "Why on earth would we return him to have someone else adopt a dog this amazing?"

With City Hall off limits to the public due to the COVID pandemic, only a handful of people have beheld the visual acknowledgements to some of the issues his administration cares about, such as animal welfare and equality, said Gloria.

"I brought a little bit of flair to the mayor's office but no one can see it. It is off limits other than to very few staff members," noted Gloria. "When the time comes we will welcome back people to City Hall so they can enjoy those portraits and the painting of Diego and a few other things I have here to celebrate San Diego."

"The answer is colored by it not being my first time in the office or chair. But it does feel different, largely because of the pandemic and all the challenges we are facing," said Gloria about how it feels to be mayor of his city. "It allows me to sit at the desk with greater confidence and clarity of thought in terms of what needs to be done and how to prioritize the multitude of challenges that come in the door every single day."

Last year at this time Gloria was serving in the state Assembly and was the odds-on favorite to win the contest to lead San Diego, the eighth-largest city in the country and the second largest in the state with 1.4 million residents. He succeeded termed out San Diego Mayor Kevin Faulconer, a Republican now running to be California's next governor.

"This is more than inauguration day for me. It marks a new chapter in San Diego's history," said Gloria at his swearing-in ceremony December 10. "Today is the first day of building a San Diego that truly is for all of us." 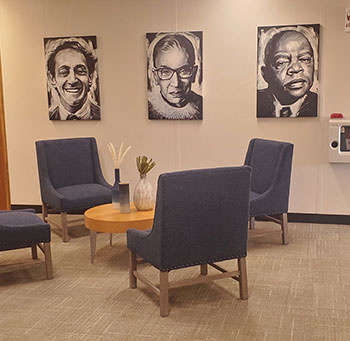 Equity a guiding principle
Equity is one of Gloria's main guiding principles as mayor, along with diversity and inclusion. As such, he purposefully formed a nine-person Black Advisory Group to help advise him about the issues his city's African American community is facing.

He intends to soon announce the members of similar groups for other communities, including that of the city's long-standing LGBTQ mayoral advisory committee. And Gloria is working on hiring for a new office of race and equity that city leaders authorized last year and is expected to include LGBTQ issues in its purview.

Gloria, who has a designated liaison to the LGBTQ community on his staff, said he takes "tremendous pride" in representing both the LGBTQ and communities of color, especially the overlap between them, and appreciates the attention his historic election has received.

"People are surprised San Diego has never had a person of color elected mayor before. Just our geography would suggest someone has been here before in our history. That hasn't been the case," said Gloria. "A city like ours on the Mexican border, on the Pacific Rim, a city extremely racially diverse with large numbers of immigrants has never elected a person of color to lead the city is indicative of the amount of work we have to do here. It strengthens my call to do the work at City Hall through a lens of equity."

Fernando Lopez, executive director of San Diego Pride, told the B.A.R. that it is "wonderful" having a gay mayor lead the city. It sends a powerful message especially to LGBTQ youth, noted Lopez, who is queer and nonbinary.

"It is generally thrilling to know someone who has a multi-ethnic background and who is LGBTQ identified holds the seat of the mayor. That to me is personally exciting and rewarding to know there is a path there for me, for any LGBTQ person of any age but especially our young folks to see we can be anything we want," said Lopez, 39, whose maternal relatives were Jewish immigrants from Russia and Austria and whose paternal relatives were migrant field workers from Jalisco, Mexico. "It is what we have been fighting for for so long."

A key issue for Lopez, who has been serving on the LGBTQ mayoral advisory group, is seeing that Gloria and the City Council fund and respect the new race and equity office and that the policy recommendations that come out of its work "aren't ignored or swept under the rug," they said. "It is beyond time for us to recognize there is a lot of work to do from a policy perspective for the state and city to address racial inequity." 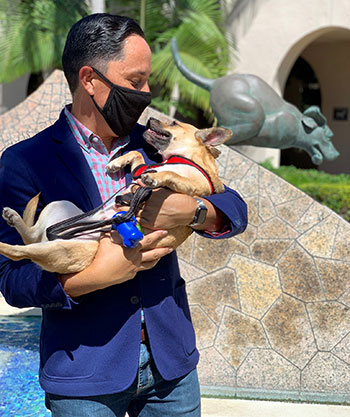 Pride organizers hope to have some in-person events this year, but hosting a parade with hundreds of thousands of participants and spectators is "unlikely," said Gloria.

"We can certainly hope for that and try to plan for it, as I know our Pride organizers are," he said. "We will have Pride even if not the traditional one people are used to. It remains to be seen."

Nicole Murray Ramirez, a gay San Diego Human Rights Commissioner who has now advised the last eight mayors of his city and co-chairs the LGBTQ mayoral advisory group, told the B.A.R. that another factor for why Gloria is a unique mayor is his coming from a middle-income family that knows what it is like to struggle to make ends meet. Due to the COVID pandemic, Gloria's partner was laid off and his father lost his job.

"He knows the struggle. This is a guy that lives and breathes who we are. He knows," said Murray Ramirez. "He will definitely be the people's mayor."

What San Diego is now confronting in terms of fiscal deficits reminds Gloria of the Great Recession in 2008, when he first joined the City Council that December. Earlier this month Gloria's office announced the city is facing an $86 million deficit this fiscal year, which ends June 30.

It is largely due to the health crisis, which has particularly decimated San Diego's tourism industry. With San Diego County responsible for addressing the pandemic, there is little that Gloria can do directly in terms of testing and vaccinating his city's residents for COVID.

Nonetheless, he has ordered city departments to partner closely with their county counterparts and opened a municipal gym as a vaccination site that can handle 1,000 people a day but has only been vaccinating a few hundred people due to limited supplies. Gloria is hopeful by the summer the vast majority of his constituents will be vaccinated.

"We are making incremental progress," he said. "But I want to make clear I am not happy."

Like other big city mayors across the state, Gloria had been vocal about the need for state health officials to open up vaccinations to educators and other school employees. That is now being rolled out, with San Diego public schools planning to reopen in April for in-person learning on a hybrid schedule.

Calling it "a step in the right direction" in a statement Tuesday, Gloria added he plans to continue "working with and urging the school district officials, teachers and stakeholders to continue making progress toward getting our kids back in the classroom full time."

In addition to bringing about an economic recovery, Gloria is also focused on the dual crisis of homelessness and high housing costs in his city. It is an issue he personally grapples with, as unlike most mayors, Gloria is not a homeowner.

"I am a renter in my hometown and can't afford to buy a home in the city I grew up. And I am mayor," said Gloria.

Despite the challenges he and his city are facing, Gloria expressed optimism about the future.

"I feel confident," he told the B.A.R. while acknowledging the "huge problems" San Diego must address. "But we will get through them."