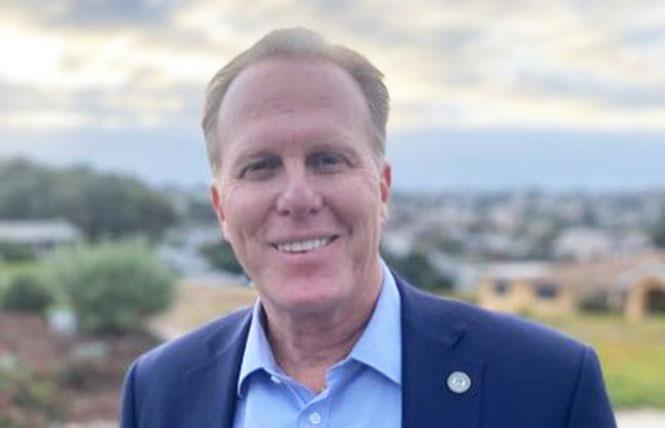 He has been described as the strongest San Diego mayor on LGBTQ issues and was one of the rare Republican elected officials to publicly support same-sex marriage. He called on Congress to adopt sweeping federal LGBTQ rights legislation and backed campaigns to honor LGBTQ luminaries with their own postage stamps.

It is a record that will trail Kevin Faulconer as he runs to lead California, whether via the effort to recall Governor Gavin Newsom this fall or during next year's gubernatorial race, where the top two vote-getters in the June primary will face off in the November 2022 election. Should Newsom, a Democrat who was vaulted to international stardom with his decision to marry same-sex couples in 2004 when mayor of San Francisco, fend off the recall campaign, then next year's contest could see voters given a choice between two former top municipal leaders considered strong advocates for the LGBTQ community.

While it is assured that Newsom will not shy away from his LGBTQ record — during his first two years in the Governor's Mansion he received perfect scores on the annual legislative scorecard issued by statewide LGBTQ advocacy organization Equality California — the same can't be said of Faulconer. The only mention of his being "a vocal supporter of the gay community" on his campaign website at https://www.kevinfaulconer.com/ comes on Page 2 of his news clipping section if one clicks on the page for a Washington Examiner article.

After Faulconer officially announced his bid February 2, his campaign arranged interviews with local media outlets throughout the state but did not do so with any LGBTQ news outlet. It had yet to arrange an interview with the Bay Area Reporter as of the paper's press deadline Wednesday morning, despite repeated requests in recent weeks.

Faulconer's stance within the LGBTQ community has taken several hits in recent months, such as when he revealed that he voted to reelect former President Donald Trump in November. And last fall, when he attacked Newsom for signing into law a bill that ended the discriminatory treatment of LGBTQ young adults faced with registering as sex offenders.

In a tweet Faulconer wrote he was "appalled" by Newsom's decision and that "an adult who commits ANY sex act on a minor 10 years younger must be registered a sex offender." The bill did not allow for statutory rape or pedophilia, and judges maintain the discretion to require someone in such cases to register as a sex offender.

Controversy over the bill engulfed gay former Assemblyman Todd Gloria, who had voted for it, as he ran to succeed the termed out Faulconer. He was able to survive the homophobic attacks to become San Diego's first gay elected mayor, having years ago briefly held the position on an interim basis.

Gloria had served on the San Diego City Council alongside Faulconer in the late 2000s and early 2010s, and was its president during much of Faulconer's first months as mayor in 2014. Having worked closely with both his predecessor and the governor during his time in the state Legislature, Gloria told the B.A.R. one difference between them came during private conversations regarding LGBTQ issues.

"There was no cajoling of Governor Newsom on LGBTQ rights; he is right there. There is no explaining, he understands our issues," said Gloria, pointing out that Newsom didn't run away from his record on LGBTQ concerns when he sought statewide offices. "Governor Newsom will never do that to us. He is committed to us."

Gloria was unequivocal in his opposition to the recall and advised people not to sign the petition to place it on the ballot. For LGBTQ Californians in particular, he argued there is no better champion of the community to have in the governor's office than Newsom.

"While it is true Mayor Faulconer, during his time in office and his administration, was very open and supportive of our LGBTQ community, there has never been a stronger ally of our community than Governor Newsom," said Gloria. "I think support in 2016, 2017, 2018, 2019, and 2020 of our community is probably expected in California. Standing up in the public square and proclaiming your support of marriage equality in the early 2000s is very different. That is a level of courage and consistency few outside of our community can claim."

As the B.A.R.'s Political Notebook reported in early February, recent polling has registered voters' anger at Newsom over his handling of the COVID-19 response following the statewide lockdown he imposed during the holidays and the slow rollout to vaccinate residents. The polls led most political observers to predict the recall was likely to make the ballot but indicated there was less support for ousting the governor.

A majority of Republicans in the Legislature have endorsed Faulconer's gubernatorial ambitions, and over the weekend the state Republican party donated $125,000 to the recall effort. By March 17 recall backers are aiming to submit close to 2 million signatures to the secretary of state. They need roughly 1.5 million valid ones, and as of the end of January had 410,087, according to the secretary of state's office.

"This tremendous assistance from CAGOP will guarantee that we bring in enough additional signatures to hold Gavin Newsom accountable for his devastating performance as governor of California," stated Rescue California Campaign Manager Anne Dunsmore.

GOP divided
But Republicans are divided on who would be the best candidate to take on Newsom. Businessman John Cox, who lost to Newsom in the 2018 gubernatorial race, and gay former San Diego city councilman Carl DeMaio, a vocal proponent of the recall, have both excoriated Faulconer for his moderate record in office.

Rumors have recently circled that two out prominent conservatives were looking at the race: Caitlyn Jenner, a transgender woman and former Olympic athlete, and gay former U.S. Ambassador to Germany Richard Grenell. But Jenner, who voiced regrets about her past support for Trump, denied she was interested.

Grenell, a vocal backer of Trump, who named him acting director of national intelligence, said on Fox News over the weekend that his focus is currently on qualifying the recall effort. He sidestepped host Maria Bartiromo's direct question if he wanted to be governor.

"We still have a long way to go to gather signatures to put this on the ballot because they are going to play games. They already are. So I would just say we got to keep focused on getting rid of Gavin Newsom," said Grenell on her Sunday show.

If Faulconer has any chance of being elected to lead the Golden State, where Republicans currently don't hold any statewide office, he is going to need to court LGBTQs, a reliable bloc of voters who overwhelmingly cast their ballots for Democratic candidates in California. But he will also face questions from the LGBTQ community about his time at City Hall.

Gay Assemblyman Chris Ward (D-San Diego), a former City Council member who succeeded Gloria in the Legislature, told the B.A.R. he "worked with him were I could" but faulted Falconer for the "many boondoggles" he left behind as mayor that have put the city "in a more precarious" financial position.

"I do not want to see that failure of leadership scaled up to damage something like the size of the state of California," said Ward.

San Diego Human Rights Commissioner Nicole Murray Ramirez, a gay Latino who co-chairs the city's mayoral LGBTQ advisory body, has long known Faulconer and his wife, Katherine. In an interview he told the B.A.R. he was "very disappointed" with Faulconer's vote for Trump last year.

As for the sex offender registry bill, some prominent Democrats had also voiced concerns over it, noted Murray Ramirez, who said its sponsors could have done a better job of explaining the complicated legislation to the public. A former statewide chair of EQCA, Murray Ramirez told the B.A.R. Faulconer's gubernatorial bid has pitted him and other LGBTQ leaders who had worked with him between a "good solid mayor" who was "outstanding" on most LGBTQ issues and the most pro-LGBTQ governor of the state.

"For me, it is probably one of the most difficult situations I've ever been in politically," he said. "I truly love the mayor and his wife."