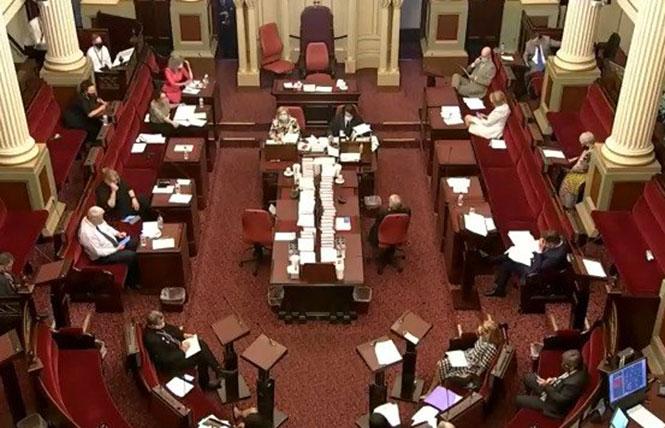 Victoria Member of Parliament Andy Meddick, a proud father of two "perfect" transgender children, said, "they do not need fixing."

Meddick, with the Animal Justice party, added, "Nor do any other children or adults who do not fit an often religiously-held belief that sexuality and gender are binary only."

Victoria is the second state in Australia to ban conversion therapy, the practice of attempting to change a person's sexual orientation or gender identity. It has been widely discredited by major medical and psychological organizations, and numerous other groups.

The bill
The Victorian bill, introduced by Honorable Jill Hennessy last November, prohibits conversion therapy in a number of ways.

Religious or mental health providers' counsel, prayer, practices, or referrals to other institutions or parents and guardians of children and older adults are not exempt.

Those who break the law will be investigated by Victoria's Equal Opportunity and Human Rights Commission, a groundbreaking move that empowers the commission to conduct investigations in cases.

The law was based on conversion therapy survivors' experiences.

The Liberal-National Coalition party did not oppose the bill but moved a number of amendments that failed, including one to pause its progress for further consultation.

Victoria is Australia's second-smallest state, with a population of more than 6.3 million. According to a 2016 government census, an estimated 23.2% of the population is Catholic. An estimated 31.7% do not state their faith.

In a joint statement, Sexual Orientation and Gender Identity Change Efforts, also known as SOGICE Survivors, and the Brave Network rebutted religious leaders' claims and praised lawmakers for not giving into the fearmongering.

"The passing of this legislation sends a strong message that fearmongering, which LGBTQA+ people have been forced to endure every time protective or equalizing legislation has been debated, will no longer fool, or be accepted by, the Australian public," said Csabs in the statement.

The legislation will "act as a powerful deterrent, ultimately saving lives," he added.

Rodney Croome of just.equal challenged Queensland to revise its "sub-standard" conversion therapy in a February 4 news release from the organization, stating, "It fails to address conversion practices in religious settings which most such practices occur."

Last year, Victor Madrigal-Borloz, the U.N. independent expert on violence and discrimination based on sexual orientation and gender identity, and a senior visiting researcher at Harvard Law School, called for a ban on conversion therapy globally following an in-depth report on the practice.

The report was influenced by research conducted by OutRight Action International in 2019; a 2020 survey conducted in collaboration by Hornet, the LGBT Foundation, and the Center for Public Health and Human Rights at Johns Hopkins University; and years of research by experts in the field.

In the United States, 20 states, including California and most recently Utah, along with the District of Columbia, Puerto Rico (a territory), and more than 70 localities have passed laws protecting minors from conversion therapy, according to the National Center for Lesbian Rights' Born Perfect campaign.

On February 4, Spain also announced plans to criminalize conversion therapy, slapping perpetrators with an estimated $180,771 fine (€150,000) if a proposed bill is passed. The country is also moving to make it easier for transgender individuals to change their gender and bring equity to Spaniards by guaranteeing equal rights for all with two separate bills.

Meanwhile. Victoria's bill is now heading to Governor Linda Dessau AC for royal assent. Once signed, it will go into effect in 12 months.

As of February 8, it was unclear if the young men's lawyer, Alexander Nemov, has been allowed to speak with them, but he found out on February 6 that they are "tired and frightened," the network reported on its website.

The network is posting regular updates on the situation.

According to the network, Chechen authorities reportedly "pushed" the young men, identified as Salekh Magamadov, 20, and Ismail Isteyev, 17, to refuse to see a lawyer.

Nemov, who works with the network, has attempted to meet with Isteyev and Magamadov but has been denied, according to the organization.

Due to being a minor, Isteyev's mother and her lawyer filed paperwork "indicating that the detention was carried out by police officers, without notification and her consent to conduct investigative actions," according to the network.

Magamadov and Isteyev were taken from the organization's temporary safehouse in Nizhny Novgorod in western Russia by Russian police and handed over to Chechen authorities.

The two men had been staying in the safehouse, which is about 250 miles from Moscow, since June 2020.

They escaped Chechnya last April after being detained and tortured by Chechen police in the Muslim-majority Northern Caucasus of Russia.

Prior to their release under police watch, the two men were forced to record an apology video, which was posted online, the LGBT network stated.

Chechnya has been under fire for more than four years since news broke of the autonomous Russian region's detainment and torture of hundreds of LGBTQ people in the spring of 2017. Some people reportedly died while in detention while survivors and many others attempted to escape Chechnya, which gave rise to the network's "rainbow underground."

The LGBT network has since helped hundreds of LGBTQ Chechens escape and resettle in LGBTQ-safe countries.

International pressure and sanctions have not broken Kadyrov or Putin. The leaders repeatedly deny mass persecution of LGBTQ people in Chechnya.

However, persecutions have continued, with spikes in 2017 and 2019 that made headlines.

David Isteev, the LGBT network's coordinator for the emergency assistance program, helped Isteyev and Magamadov escape Chechnya and temporarily set them up at the safe house.

For eight months Isteyev and Magamadov were safe until Isteev received a phone call from one of the young men in the middle of the afternoon on February 4.

He heard screaming in the background, he told ABC News.

Isteev immediately reported the incident to Russian and European authorities and the media after Nemov arrived at the safehouse about 30 minutes after the phone call and found it ransacked. The young men were gone.

Neighbors reported seeing men who appeared to be a SWAT team in black uniforms in the building earlier in the day, Nemov told ABC News.

Nemov began investigating to find Isteyev and Magamadov. Russian police informed him that the young men had been handed over to Chechen police who took them by car to Gudermes.

The men were allegedly detained as witnesses in relation to a criminal case, police told Nemov. They were not considered suspects, police said. They did not provide more information, Nemov said.

However, the 1,107-mile road trip, which takes about 23.5 hours, took longer than it should. The men did not arrive by Friday night, according to Nemov, who flew to Gudermes to represent Isteyev and Magamadov.

"A significant amount of time has passed and that is very suspicious," Nemov told ABC News.

He finally received an update January 6, but he was denied seeing Isteyev and Magamadov. He still has not been given a reason for their detainment, according to the LGBT network.

The LGBT network filed a complaint with Russia's Investigative Committee. The network also filed a petition with the European Court of Human Rights.

Dmitry Peskov, a Kremlin spokesman, told ABC News that officials were unsure about the truth of the situation and that it was not the Kremlin's role to investigate.