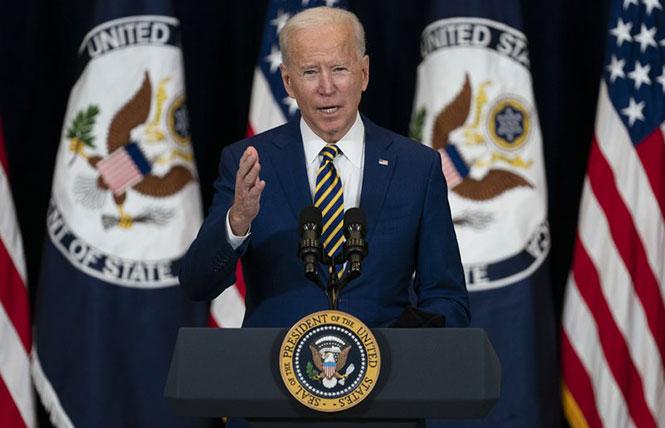 President Joe Biden has put his campaign words into action, sending a signal to the world that America is picking up the torch again as a global champion for LGBTQ rights.

On February 4, Biden empowered staffers of the departments of state, justice and homeland security, both domestically and abroad, to take meaningful action on behalf of LGBTQ rights.

His revised "Memorandum on Advancing the Human Rights of Lesbian, Gay, Bisexual, Transgender, Queer, and Intersex Persons Around the World" strengthens the historic memorandum signed by former President Barack Obama in 2011.

Biden ordered U.S. agencies to actively undo the Trump administration's anti-LGBTQ policies within 100 days and to submit a report to the State Department to present to the president within 180 days. The report will recur annually.

He freed U.S. diplomats to utilize diplomatic tools including, but not limited to, financial sanctions and visa restrictions against countries harming LGBTQ citizens. Biden also directed U.S. representatives to assertively identify global allies and partners working to advance LGBTQ rights around the world, a slight push more than Obama did.

Same-sex marriage is only legal in 29 out of 195 countries in the world.

Biden announced his plans to "reinvigorate our leadership on the LGBTQI issues and do it internationally" when he addressed State Department employees and reporters at the Harry S. Truman Building, the department's headquarters, in Washington, D.C. ahead of signing the memorandum.

"We must start with diplomacy rooted in America's most cherished democratic values: defending freedom, championing opportunity, upholding universal rights, respecting the rule of law, and treating every person with dignity," Biden said.

"That's the grounding wire of our global policy — our global power. That's our inexhaustible source of strength. That's America's abiding advantage," he continued.

Biden added that his administration will "ensure diplomacy and foreign assistance are working to promote the rights of those individuals, included by combatting criminalization and protecting LGBTQ refugees and asylum seekers.

"When we defend equal rights of people the world over — of women and girls, LGBTQ individuals, indigenous communities, and people with disabilities, the people of every ethnic background and religion — we also ensure that those rights are protected for our own children here in America," he said.

Biden also addressed the military coup in Myanmar, and ongoing human rights violations and threats brought by China and Russia, among other pressing world issues, including the global pandemic.

"America cannot afford to be absent any longer on the world stage," Biden said.

"Biden wants this to be seen as the policy of the United States government. This administration prioritizes LGBTQ rights as human rights," an unidentified senior official told the Daily Beast.

It is a different world from former President Bill Clinton's battle to use a Senate recess to appoint San Francisco resident James Hormel as the first openly gay U.S. ambassador to Luxembourg in 1997, gay retired career diplomat Michael Guest pointed out.

Guest became the first openly gay ambassador to be confirmed by the Senate less than three years later. Guest was later stationed in Romania under former President George W. Bush.

In the nearly 25 years since, 14 openly gay U.S. ambassadors have served, including five nominated by Trump.

LGBTQ advocates hope Biden will continue his record-breaking appointments by appointing the first out lesbian, bisexual, or transgender ambassador.

Guest told ABC News that in today's world, "the fact that no one is precluded from rising to that level of a government agency will be like a penny dropping on many countries — that we are, in fact, back to the country that they'd like to see theirs emulate."

In his new role, Gifford will greet every world leader visiting the U.S.

On February 9, Ned Price, a gay man who is the State Department's appointed spokesman, addressed reporters for the first time.

Price famously resigned in 2017 with an op-ed published by the Washington Post that openly criticized Trump's approach to U.S. intelligence. Intelligence is Price's expertise as the former National Security Council spokesman under Obama and a longtime national security professional who spent a decade with the CIA.

The act, a bicameral effort, is in line with Biden's efforts to restore the U.S. as a global leader for LGBTQ rights, legislatively reinforcing his memorandum.

If passed, it would reaffirm the U.S.'s role and actions protecting and advancing LGBTQ rights globally as well as promote the country's LGBTQ special envoy as a permanent ambassador.

"The United States has a chance to once again be a global leader on human rights issues. We must promote and defend our fundamental values of equality, equity, and diversity, both at home and abroad," Lowenthal, who is a member of Congress' Tom Lantos Human Rights Commission's executive committee, stated in the release. "We cannot halt the extension of these values at our borders. The United States must continue to defend the innate rights of all human beings across the globe — including the LGBTQI community — to live, love, and prosper. We can and must do no less."

"This moment requires a concerted and global effort to recommit to the protection of human rights everywhere," added Markey, speaking about the "greater risk" the COVID-19 pandemic has put LGBTQ people around the world in, along with the "harmful and discriminatory policies" instituted during the last four years.

Instead, former Secretary of State Mike Pompeo pushed his anti-gay-led Commission on Unalienable Rights to call for the inclusion of religious freedom under the definition of human rights at the United Nations last year.

"LGBTQI people cannot be left to suffer because of changes in the White House," OutRight Executive Director Jessica Stern said in the release, pointing out the act's importance to "ensure that the U.S. protects and upholds LGBTQI rights as a consistent, integrated and essential foreign policy priority."

Secretary of State Antony Blinken bolstered the Biden administration's commitment to LGBTQ rights prior to his address at the State Department. He reaffirmed the department would work with "like-minded governments" and utilize diplomatic tools on behalf of LGBTQ rights.

Blinken committed $10 million to the Global Equality Fund for the 2021 fiscal year. The fund is a private-public partnership supporting LGBTQ rights around the world. Congress will have to approve the federal portion of the funding.

On February 8, Blinken announced the U.S. would rejoin the U.N. Commission on Human Rights. In his speech Biden vowed the U.S. would rebound from the "intense pressure" it had come under within recent years and the last few weeks, noting the attempted insurrection at the U.S. Capitol last month.

"America is back. Diplomacy is back," Biden said at the State Department.

"The American people are going to emerge from this moment stronger, more determined, and better equipped to unite the world in fighting to defend democracy, because we have fought for it ourselves," he added.

Caution
LGBTQ global leaders, while pleased with Biden's swift actions placing LGBTQ rights in the spotlight on the world stage again, also expressed caution as the world has changed since the presidencies of Clinton and Obama.

Lessons learned during the Obama years taught that U.S. support for LGBTQ rights and rebuking anti-gay countries with tough policies and sanctions can sometimes backfire with harmful effects, such as discrediting local queer communities and worse, countries passing anti-gay laws.

American diplomacy is not always the solution, Stern noted to France 24.

"One of the most effective and consistent ways of discrediting LGBTIQI people and our movement is to say that they are the result of colonial and Western imposition — they're getting paid by foreign donors," Stern said.

She advised State Department officials should take each country case-by-case to assess whether public diplomacy is the best approach.

Phillip Ayoub, an associate professor at Occidental College in California who has studied diplomacy and sexual minorities, agreed.

"This kind of foreign policy cannot be top-down. It has to be done carefully with civil society in different countries," he told France 24. "I think empowering them is one way where we can be productive."

Out in the World: Senate questions Biden admin about protecting LGBTQ asylum seekers
Sign up!