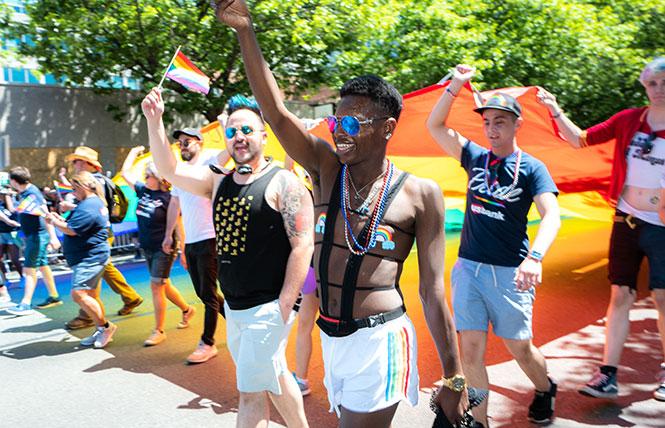 As Pride committees up and down the West Coast begin to make plans for their 2021 celebrations, already one major city will not see an official parade this year. Seattle organizers told the Bay Area Reporter this week they are scrapping their in-person event this June and are once again going virtual due to the COVID pandemic.

Other Prides are likely to follow suit with having strictly virtual events this year, while others are contemplating holding hybrid celebrations, with some events virtual and others smaller in-person gatherings. Most of the annual LGBTQ festivals take place in late spring or the summer, just when federal, state, and local health officials expect to see most Americans vaccinated against the virus.

The Biden administration is aiming to roll out 100 million COVID-19 vaccine doses in its first 100 days, which will be April 30, while San Francisco officials aim to vaccinate all of the city's residents by June 30. Meanwhile, federal health experts expect herd immunity in the country by this fall.

Seattle Pride, which produces a parade and another event known as Pride in the Park, is going to go all virtual in June but hopes to do an in-person event later in the year when it is safer. According to a statement the organization sent to the B.A.R. February 9, that decision was made by its board of directors.

"This year we are expanding our virtual Pride celebration to two days (June 26 & 27), and expect that the Seattle Pride parade will return in 2022 on the last Sunday in June. We're also hopeful that we will be able to host a smaller scale in-person event for Seattle's LGBTQIA+ community in the fall," Randy Hurlow, a spokesperson for Seattle Pride, wrote. "The Seattle Pride board of directors made the difficult decision last month after reviewing the current state of the pandemic, the projected timeline for a critical mass of vaccinations, conferring with other Seattle LGBTQIA+ groups, and discussions with public health officials and the city of Seattle's special events department. In each of these areas of review, we were unable to see a responsible path forward in which we could safely gather more than 400,000 people along our parade route." 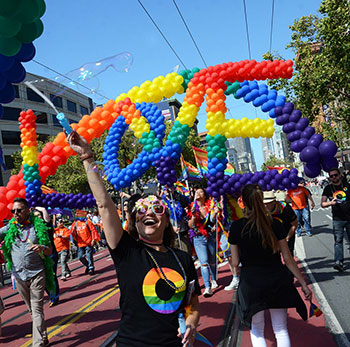 While the San Francisco LGBT Pride Celebration Committee stated through spokesperson Peter-Astrid Kane January 29 that it presently has "no plans to announce" what the nature of its 51st annual event will be this June, other Pride organizations expect to soon announce what form their annual celebrations will take this year.

The B.A.R. contacted 13 organizations that host Pride and Pride-related events on the West Coast in recent weeks and received feedback from nine.

One of those is the organization that puts on San Francisco's Trans March, which under normal circumstances takes place the Friday before the city's LGBT Pride parade, which is itself held the last Sunday of June. This year's date is June 27.

Nicky "Tita Aida" Calma, a Trans March board member, told the B.A.R. that a planning committee that has yet to be established will make decisions about this year's event.

"The planning committee for this year's Trans March hasn't been formed yet. [The] San Francisco Transgender Empowerment Advocacy Mentorship Program (SF TEAM), a transgender leadership program at SF Community Health Center, supports the forming and organizing of community members who express to participate in the planning committee," Calma stated in a February 6 email. This planning committee will be entirely made up of trans and gender-nonconforming volunteers from around the Bay Area.

"Once the members of the planning committee have been formed and identified, they will be in charge to determine whether this year's event will be virtual or an in-person event," Calma wrote.

When asked about the timetable for these events, Calma clarified that the committee will probably be formed in early March.

San Diego Pride announced January 22 that its theme this year will be "Resilient" and it will take place in some form July 10-18.

"Our brilliantly diverse community has a history of resilience; we have built innovative pathways to overcome discriminatory laws, hate, violence, and issues of public health," Fernando Z. Lopez, the executive director of San Diego Pride, stated in a news release. "We must continue to lift up that legacy if we are to foster a future free of prejudice and bias for all LGBTQ people locally, nationally, and globally. We must remain resilient."

San Diego Pride may include an in-person event, the release states.

"The San Diego Pride board, staff, and volunteer leadership team have been working diligently on multiple contingencies for interactive virtual gatherings, a full in-person event, and a mid-road of both livestreaming content with scaled back in-person events," the release states. "As the year unfolds, San Diego Pride will continue communications with local and state public health officials in order to adjust the annual Pride celebrations in accordance with public health guidance for the protection of our community's health and safety."

Pride Northwest in Portland, Oregon is also looking at a hybrid strategy.

"We have made high level decisions regarding Pride 2021 and are pursuing a hybrid strategy of in-person (as allowed by local, regional, and state regulations) and virtual efforts. Although we expect to be active over a good portion of June, the 17th through 20th are likely to hold the majority of our programming," Debra Porta, the executive director of Pride Northwest, stated in an email to the B.A.R. February 5. "Most of the planning decisions are decided by myself, with input from my staff and board."

Porta wrote that the past four to six weeks have been spent considering specific ways to implement this strategy, and that when further announcements can be made "totally depends on how things progress over the next few weeks."

Elsa Martinez, president of the Long Beach Pride Board of Directors, told the B.A.R. that the board has not made decisions as of now about the event, which takes place annually in May.

"Our Long Beach Pride Board of Directors has been discussing these questions during this difficult time for all of us," Martinez wrote February 7. "We are at this time in the midst of making a decision whether we will have a Long Beach Pride event, if that will be a virtual event or any kind of in-person.

"For us an in-person event is of course pending of the safety issues surrounding the pandemic. Our board will be making a decision this month on steps we will need to take," Martinez continued. "No dates have been decided at this time and no decisions on what type of event have been made."

Christopher Street West/Los Angeles Pride stated February 2 that it is currently developing "a variety of programming that will be announced soon."

"As the pandemic continues to affect the way all organizations plan for events, CSW/LA Pride is committed to producing a safe but impactful Pride 2021 for the communities we serve," stated Sharon-Franklin Brown, the president of the Los Angeles Pride Board of Directors. "We're developing a variety of programming that will be announced soon, and will continue to include input from local health officials, community-based organizations, and nonprofits. We encourage other Prides across the country to do the same. Even as we prioritize safety, we want to acknowledge the important role LA Pride serves to our community, and are committed to finding ways to show up and bring people together, whether in person or virtually, in 2021 and beyond."

In the state's capital, the Sacramento LGBT Community Center is responsible for putting on an annual Pride celebration on the Capitol Mall at the beginning of June. It expanded from a one-day to a two-day event in 2019.

David Heitstuman, who is the executive director of the center, told the B.A.R. that because the vaccine "rollout has been slow and the pandemic rages on," a fully in-person event is "very unlikely" this year.

"No decisions have been made yet and we're approaching Sacramento Pride 2021 with cautious optimism," Heitstuman wrote February 1. "With our community's health and safety as our first priority, the center's board, staff, and volunteers continue to monitor public health information and the input of community as we consider options for virtual Pride gatherings, a full in-person event, or some hybrid of both live-streamed content with some small scale in-person events if deemed safe."

Heitstuman wrote that the pandemic has already limited what Sac Pride can do in other ways, too.

"As you probably know, proceeds from our annual in-person Pride events underwrite the costs of producing such a massive endeavor as well as year-round programming at the Sacramento LGBT Community Center. Last year, that revenue vanished as we made the difficult decision to go all virtual," he wrote. "It seems very unlikely at this point that there will be a fully in-person Pride in early June this year, but we plan to hold off on announcing any decisions about how we'll celebrate Pride in 2021 until later this spring."

Silicon Valley Pride, which takes place in downtown San Jose in August, is expecting to share news about its future in the early summer.

"Currently we are still figuring the plans for 2021," Saldy Suriben, the chief operating officer for Silicon Valley Pride, stated January 29. "Hoping we have some news to share in late June or July. Apologize but that's all I can share with you at the moment."

The Oakland, Santa Cruz, and Sonoma County Pride organizations, as well as the San Francisco Dyke March, did not respond to requests for comment by press time.

SF Pride will include some in-person events
Sign up!