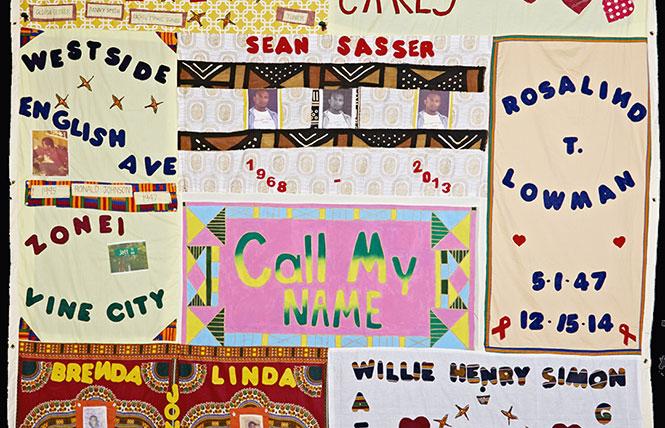 During Black History Month, the National AIDS Memorial Grove, which oversees the AIDS Memorial Quilt, has curated a special virtual exhibit of 56 blocks to bring to light the impact the disease has had on Black America.

"This virtual exhibition shares stories of hope, healing, and remembrance to honor Black lives lost to AIDS" John Cunningham, executive director of the grove, stated in a news release. "Our hope is that it helps raise greater awareness about the ongoing struggle with HIV and the impact systemic barriers have to positive health outcomes, particularly among the Black community."

In 2018, according to the release, Black Americans made up 42% of the nearly 38,000 new HIV diagnoses in the U.S., with half of those living in Southern states.

"Today, Black Americans face the highest impact of HIV/AIDS compared to all other races and ethnicities," stated Raniyah Copeland, president and CEO of the Black AIDS Institute. "This highlights the need to center Black and LGBTQ people in the fight to end this pandemic."

Copeland added that a goal of the virtual exhibit is to "advocate for Black people living with HIV, defy stigma, and create awareness around prevention and treatment options available today that can end HIV in Black communities over the next decade."

The AIDS grove assumed stewardship of the quilt in 2019. Previously, it had been overseen by the Names Project, which dissolved after the quilt was transferred to the grove last year. In 2013, the Names Project created a special quilt program, Call My Name, to draw attention to HIV/AIDS in the Black community and the public health crisis that still exists today. The grove is continuing that project, as well as other educational initiatives.

Panels made as part of the Call My Name program are included in the virtual exhibit. Other panels feature children who lost their lives to AIDS; Black women; Black men; and Black celebrities, musicians, artists, designers, and journalists. A quilt panel honors Sean Sasser, an AIDS activist who appeared on MTV's "The Real World: San Francisco" and who shared his relationship with Pedro Zamora, who also died of AIDS-related complications.

The Black History Month exhibition is free to the public and can be viewed at www.aidsmemorial.org through March 31. Visitors to the site can also view all 48,000 quilt panels and search for the names of loved ones who have a panel made in their memory.

ABA honors out leaders with Stonewall Award
California Supreme Court Justice Martin Jenkins, a gay man and the first out LGBTQ person to serve on the state's high court, will be honored with a 2021 Stonewall Award by the American Bar Association during a virtual ceremony February 20.

Two other recipients of the award will be lesbian U.S. Senator Tammy Baldwin (D-Wisconsin) and gay Judge Sabrina McKenna, the first openly LGBTQ justice to sit on the Hawaii Supreme Court.

Named after the New York City Stonewall Inn riots in 1969, which were a turning point in the LGBTQ rights movement, the ABA award recognizes lawyers who have considerable advanced LGBTQ individuals in the legal profession and successfully championed LGBTQ legal causes, a news release stated.

For more information on the ABA's midyear meeting, where the awards will be presented, go to https://bit.ly/2Ob0tlG

Queer arts center seeks 'Hope' awards entries
The National Queer Arts Center, home to the San Francisco Gay Men's Chorus, has announced a call for entries for the inaugural Give 'Em Hope Awards. The project is being funded through a gift from a chorus member and his family, the organization stated in a news release.

Inspired by slain gay San Francisco supervisor Harvey Milk's pioneering "Hope" speech, the awards will provide five artists with $1,500 each to support an artistic project that focuses on the themes of hope. Winners will also have their work featured on SFGMC TV, a free online platform showcasing exciting performances, interviews, singer spotlights, and more.

The awards are designed to serve young, under-resourced, and diverse communities and are open to artists up to age 25. The artistic medium may be any expression of hope, including performing arts, visual arts, literature, and film.

"We are thrilled that singing member David Falzone and his family stepped forward to provide the inaugural donation to create a special projects fund for the chorus," SFGMC artistic director Timothy Seelig stated. "One of the initiatives they were passionate about was giving immediate support to young, under-resourced artists to help them continue to pursue their art even in these dark times."

Artists interested in submitting their work for consideration should register by Monday, February 15, by emailing hope@sfgmc.org to receive more information. All entries must be submitted by April 1. Award recipients will be announced by April 15.