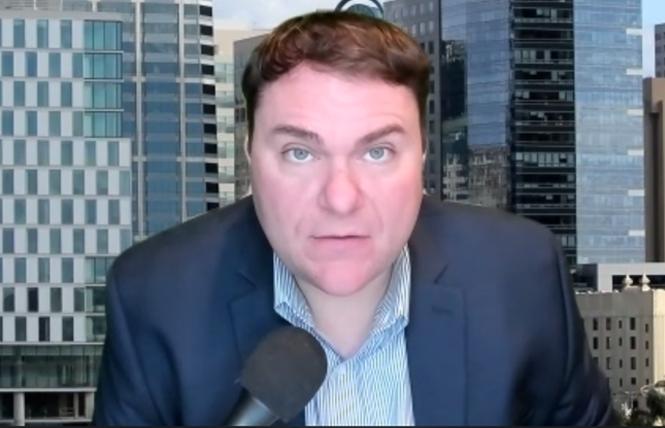 Gay former San Diego city councilman Carl DeMaio is one of the proponents of the effort to recall Governor Gavin Newsom. Photo: Screengrab

As California Governor Gavin Newsom faces mounting criticism of his handling of the state's COVID pandemic response, backers of an effort to recall him are racing to meet a March deadline to gather enough valid signatures to qualify it.

If they do then the recall vote would be held later in 2021, and several Republicans have already said they would run to succeed the Democratic Newsom. Among them are former San Diego mayor Kevin Faulconer, whose exploratory committee already has raised $1 million since launching three weeks ago, and businessman John Cox, who lost to Newsom in the 2018 gubernatorial race.

"I'm running for governor to lead the California comeback and fulfill California's promise of freedom, fairness, and opportunity," Faulconer said at his official campaign kickoff Tuesday, February 2. "I'm running to be a voice for Californians suffering during this pandemic because Sacramento can't do the basics, to restore balance and common-sense to California, and to get people back to work, back to school, and back to being proud of our state."

Within the state's LGBTQ community there are varying thoughts about both Newsom's leadership in recent months when it comes to the health crisis and on the recall. There is more support for recalling Newsom among out Republicans, with gay former San Diego city councilman and failed congressional candidate Carl DeMaio one of the main proponents of removing the governor from office.

DeMaio, who has ruled out running in the recall himself, has also been vocal about his opposition to Faulconer's gubernatorial bid. He contends the moderate GOPer isn't a viable statewide candidate.

"He can't win the governor's race in California. He can't get the support of Republicans," said DeMaio during a Zoom town hall he held in late January to discuss the recall campaign.

DeMaio, who chairs the group Reform California, also blasted Newsom for the disarray at the state agency that has botched the payout of unemployment benefits, his "draconian COVID-19 lockdowns" over the past year, and the state's "bungled vaccination" plans.

"He is incompetent at his role," DeMaio said of the governor, adding that Newsom's "ineptitude" has been covered up by the "liberal media" outlets in the state. "It is up to us to expose it so voters know their suffering is because of his incompetency."

"I think we will make the ballot for the recall," predicted DeMaio.

While out Democratic lawmakers have not been shy about criticizing Newsom's leadership approach, none support recalling him a year ahead of his having to seek reelection in 2022. (Faulconer plans to run next year if the recall fails.)

In a statement to the Bay Area Reporter California Democratic Party LGBTQ Caucus Co-Chairs Tiffany Woods and Lester Aponte contended the Golden State can ill afford "a contentious and expensive recall campaign that will only serve to further divide Democrats and Republicans and hinder vaccine distribution, prevention, and testing efforts."

They noted that COVID-19 is disproportionately affecting California's low-income, Latino, Black, and Pacific Islander, and LGBTQ+ communities, requiring the full attention of the state's leaders in the months ahead.

"These disparities will only increase as much needed resources and attention are diverted to an unpopular effort to remove Governor Newsom from office," wrote Woods and Aponte. "If Republicans truly feel that Governor Newsom does not deserve to retain his position, our democratic process provides for a regular election in November 2022. We should all be focused now on working together to end the pandemic and begin recovery efforts, not worsen it while tearing the state apart."

Newsom tumbles in polls
A poll released this week by the UC Berkeley Institute of Governmental Studies confirmed that Newsom's standing with the state's voters has taken a hit in recent months. His implementing a statewide shutdown in December that only lifted this past weekend and slow rollout of vaccinating Californians led to an 18% drop in his job approval, which is now at 46%.

According to the IGS poll of 10,357 registered voters in late January, 48% said they disapproved of Newsom's job performance. There was better news for the governor in terms of the recall, with 45% of those polled opposed. Thirty-six percent favored removal, while 19% said they were undecided.

A poll of 1,703 adult Californians conducted by the Public Policy Institute of California in late January didn't ask about the recall but did find that a majority (54% adults, 52% likely voters) approve of how Newsom is handling his job. But that is also a sharp decline from last May when the PPIC found 65% of adults and 64% of likely voters approved of the governor's performance.

In a February 2 blog post PPIC President and CEO Mark Baldassare predicted about the recall that "the math favors the effort to qualify for the ballot," but he raised doubts on there being enough support to remove and replace Newsom.

Gay Emeryville City Councilman John Bauters' views on the recall have been evolving in recent weeks. When the B.A.R. first contacted him last month about the prospect, Bauters acknowledged he was on the fence about the recall as he was upset with what he felt was Newsom's "wishy-washy indecisiveness," particularly on the decision to allow outdoor dining and other nonessential businesses to reopen even as questions remained about ICU capacity in many parts of the state.

With Newsom and state lawmakers last week announcing an extension to the eviction moratorium until June 30 in addition to financial assistance for low-income renters and small property owners, Bauters has since come to be against the recall but unsure on how he would vote should it make the ballot.

"While I am not personally supporting the recall campaign, I believe the governor needs to do a better job responding to the COVID pandemic. California committed to following the science, but the governor seems to be more interested in responding to the threat of a recall than providing leadership," stated Bauters. "It's local government officials that field calls from businesses who can't keep with the ever-changing landscape of state and county regulations; we are the ones talking to anxious residents who can't get anyone at the state's unemployment offices to answer the phone or timely process their claims; and we comfort desperate and scared families terrified about the prospect of facing eviction, wondering if the state has done enough to protect them."

He added that, "People want competent state leadership that is laser-focused on policy solutions and delivering relief to those most impacted by the economic impacts of this pandemic. That's what the governor needs to do more of and that's what Californians deserve."

Gay San Francisco Supervisor Rafael Mandelman told the B.A.R. he understands people are angry due to the health crisis but that is no reason to oust Newsom from office.

"I am enormously frustrated by the predicament that San Francisco finds itself in, which seems to be at least partially the result of missteps at the state level," said Mandelman, acknowledging that "oh no, people are angry; people are frustrated; I get that. But I don't see a recall as the right remedy. California has better things to do than fight over a recall."

Web Extra: For more queer political news, be sure to check http://www.ebar.com Monday mornings for Political Notes, the notebook's online companion. This week's column looked at the ties between California and Missouri found in a new virtual LGBTQ history exhibit.

Out in the Bay: Drawing political lines; challenging marriage-equality governor