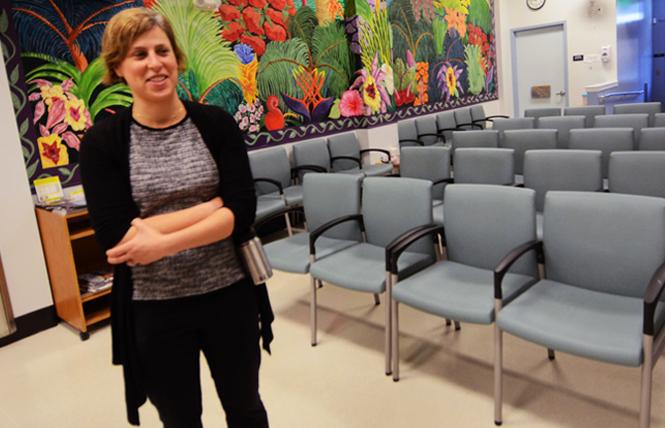 Even though most reported cases of sexually transmitted diseases were down in San Francisco in 2020, Dr. Stephanie Cohen said she is "quite concerned" because the low statistics bely an even more significant decline in testing.

"We know that STI testing rates have dramatically declined and it's most likely the decline in testing that is behind the decrease in case counts," Cohen, a straight ally who is the medical director of the Department of Public Health's City Clinic in the South of Market neighborhood, told the Bay Area Reporter, using the acronym for sexually transmitted infections. "It could be a change in behaviors that is decreasing community transmission of STIs, but I am quite concerned, because HIV and STI screening is one of our core strategies for promoting healthy sexual lives."

The year-end STD (the terminology used by DPH) numbers will probably be released in mid-February, Cohen said. But the numbers until November 30, 2020, released January 13, show declines across the board.

"Historically, syphilis in San Francisco was very much predominantly affecting men," Cohen said. "In the last three years, we have seen a steep rise in syphilis cases among cisgender women, as well. This has been going on in the state for some time, and this can result in stillbirths or severe birth problems.

As the B.A.R. previously reported, intravenous drug use is thought to be a major cause for the increase in cases among women, and cases of the bacterial infection are still predominantly spread between men who have sex with men.
Cohen was less willing to speculate when she spoke with the B.A.R. in the summer, but is now raising the alarm that reported cases after the COVID-19 pandemic ends may skyrocket due to the decline of testing now, which presumably means a lot of sexually transmitted infections are going untreated.

Heretofore, the standard treatment for the sexually transmitted bacteria was a shot of 250 milligrams of ceftriaxone and a single oral dose of 2 grams of azithromycin.

Now, the CDC and the city's public health experts are dropping the azithromycin and increasing the dosage of ceftriaxone to 500 milligrams for uncomplicated urogenital, rectal, and pharyngeal gonorrhea.

"Since 2010, CDC has recommended dual therapy for gonorrhea with ceftriaxone and azithromycin," a DPH news release states. "Increasing concern for antimicrobial stewardship, in conjunction with the continued low incidence of ceftriaxone resistance and increases in azithromycin resistance, has led to re-evaluation of this recommendation."

Cohen said that there are three main reasons for the change. The first, mentioned in the above statement, is the need to decrease antimicrobial stewardship, which is to say, "minimize exposure to antibiotics where the benefits don't outweigh the risk," she said.

The second reason is that the higher dose of the shot has been shown to be "what is needed to eliminate the gonorrhea in and of itself," she explained.

Third, doctors are trying to stop further bacterial resistance to azithromycin, which does work in gonococcal infections but not as effectively as ceftriaxone. Medical experts have been worried for years about the increasing antibiotic resistance to gonorrhea, which, in the words of the World Health Organization, will make it "much harder, and sometimes impossible, to treat."

When asked about the potential confluence between untreated STIs, antibiotic resistant STIs, and the expected resurgence of socializing this year and beyond, Cohen paused and said "Yes," that it is a legitimate concern, but wants to make clear that public health officials do not want to demonize sex, which many have been deprived of due to the COVID-19 crisis.

"I think our approach is a sex-positive approach to sexual health," Cohen said. "So being sexually active is part of that. It's been a difficult year and returning to intimacy and connection will be part of healing from the pandemic. We want people to do that in the safest way possible."

Cohen recommends people get screened regularly for sexually transmitted infections, access HIV care if they are infected, and consider condoms and PrEP.

As COVID pandemic eases, STD epidemic on the rise
Sign up!