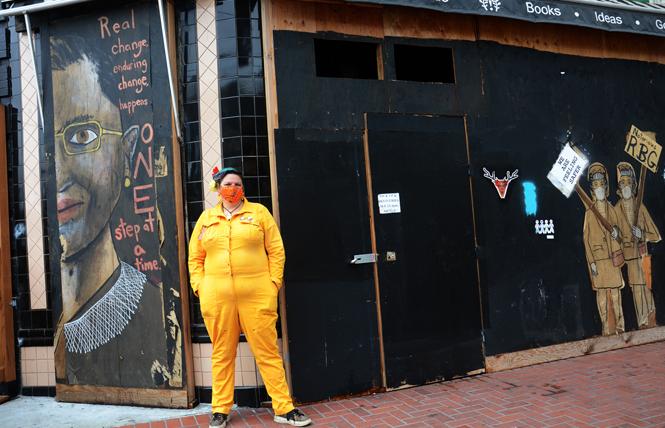 Kaytea Petro stands near two of her murals that are on the facade of The Green Arcade bookstore. Photo: Rick Gerharter

Kaytea Petro's "What We Do For Love" giant heart artwork is filled with Easter eggs to San Francisco's queer community and artistic scene. There is a white-masked gay couple and their dog all sporting bunny ears as she encountered the trio in the Castro last Easter as they delivered gourmet baskets to their friends for the holiday.

Her neighbor and longtime leader of the city's annual Pride festivities, an orange-masked Bruce Beaudette, is seen hoisting his dog Yoko Oh Yes atop his head. Also making appearances are Cesar the Superstar pole dancer; couple Christopher Campbell and Chris Conlisk and their dog Leo; and Petro herself.

"There are more dogs than children, just like in San Francisco," said Petro of her montage populated with friends, acquaintances, and strangers she has met in the city where she was born and raised.

Due to the COVID pandemic, everyone she depicted on her heart is donning a mask. This is the first time she has been selected for the annual art-based fundraiser for the city's public hospital, having applied several times in the past.

She entered a few hours prior to the deadline to do so last year after seeing another artist post a reminder on social media. Able to see people going to a city dog park from the window of her office in her Cole Valley home, Petro drew inspiration from those adorned in face coverings because of the health crisis.

"I was really enjoying people being themselves, living life in San Francisco, and wearing masks," said Petro, 42, who is bisexual and married to Julian Barber. "In life we are nice to other people even if we don't know them or don't like their politics."

Speaking to the Bay Area Reporter by phone last week as she eyed Beaudette and his dog stride by her window, Petro noted her heart artwork also encapsulates her years of riding public transit and drawing the people she encountered on buses and trains.

"I have notebooks and notebooks of people doing their thing," noted Petro, who last rode public transit March 11 when she rode Muni to BART out to Antioch in the East Bay and back home to the city.

Her heart taps into the zeitgeist of the last year and honors all of the ways people have sought to look out for other people, from socially distancing and wearing masks to stem the spread of COVID to protesting for Black lives and voting in the elections.

Noe Valley resident Daniel Dallabrida, 64, a gay man who has been living with HIV for more than 30 years, drew inspiration for his tabletop heart "Slow Blue Love of Delphinium Days" from British filmmaker Derek Jarmen's "Blue" made while he was dying from HIV-related complications. The 70-minute film shows a static blue image, as it was the only color Jarmen could see due to being blind, while the artist shares his memories.

"I am one of the lucky ones who survived at least that part of it," said Dallabrida of the AIDS epidemic.

He told the B.A.R. during a phone interview that he has always drawn inspiration from Jarmen's film.

"It is a fever dream of a very sick man but who had a good life," said Dallabrida.

In the 1990s Dallabrida launched his own firm helping to mediate discussions between AIDS activists and drug companies. He sold it to his employees in 2003 when he and his partner, Deary Duffie, decided to move to Italy so he could pursue his art.

Prior to the COVID pandemic the couple, who will celebrate their 21st anniversary together this Valentine's Day, were splitting their time between San Francisco and Tuscany. Because he spent all of last year in the Bay Area, Dallabrida had the time to work on a heart so applied for the first time after wanting to do so for some years.

"The stars lined up perfectly this year," he said.

Not only does his heart artwork draw out the beauty within melancholy, it will transform over time as the layers of unfired porcelain and clay pigments gathered from around the world that he used to construct it fall away. Its blue hue will slowly evolve to look rust-like then give way to additional colors.

"As the piece ages different layers will chip off or wear away and other colors underneath will be revealed," Dallabrida explained. "Like all of us, it is a work of progress and will continue to change over time." 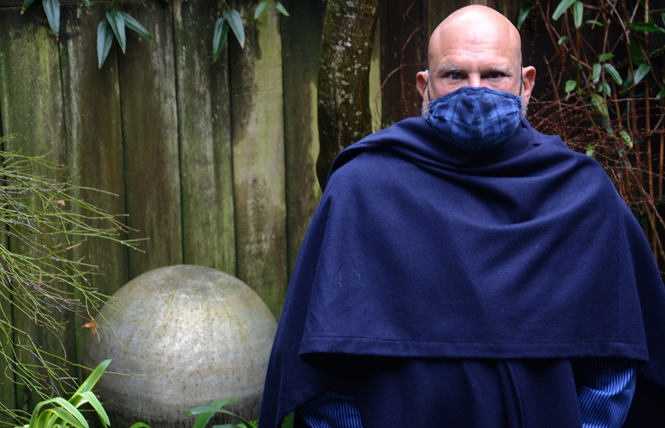 Daniel Dallabrida stands near one of his sculptures in his backyard garden. Photo: Rick Gerharter

Two of hundreds of heart artists
The two out artists were among the more than 200 artists who submitted drawings and concepts for the annual fundraiser for the foundation that raises money for the Priscilla Chan and Mark Zuckerberg San Francisco General Hospital and Trauma Center, led by CEO Dr. Susan Ehrlich, a lesbian and a longtime physician. Now in its 17th year, the "Hearts in SF" event has produced 480 hearts of various sizes since its inception and netted more than $32 million for various hospital programs.

It is particularly important to Petro to be selected, as her mother was a nurse who did her residency at SF General and many of her friends have received medical care there.

"They have helped them all and treated them all with dignity," said Petro.

This marks the first hearts fundraiser for Kim Meredith, who became CEO of the San Francisco General Hospital Foundation in June. The straight ally told the B.A.R. via a phone interview that she and her team have put together a "fantastic" digital event the evening of February 11 with special appearances by musicians Bob Weir, Carlos Santana, and the Kim Nalley Band.

"In an optimistic way it is reminding us of how we have come together in supporting each other," Meredith said of this year's hearts as they bear designs inspired by the Black Lives Matter protests, the wildfires that raged across the West, and the health crisis.

It has been fully underwritten by sponsors and already met a goal of raising $1.1 million. The foundation is now aiming to surpass $1.5 million raised to support the city's public hospital and trauma center.

"We invite the entire community at no charge to participate and look and enjoy this year's hearts. This year's event is a celebration and in honor of our essential health care workers and physicians and all those who keep our city safe," said Meredith. "Amazingly enough San Francisco over the last year has had under 300 deaths from COVID because of the leadership at the hospital and civic leadership and the courageous coming together of public and private entities in San Francisco to keep our city safe."

Some of the money raised helps fund a yearly grant program the foundation awards to innovative programs and projects SF General staff members are undertaking. In 2020, the foundation handed out 22 such grants and will announce the 2021 grants in the fall.

A $10,000 grant last year went to the Gender Diversity and Pelvic Health Physical Therapy program at SF General, which provides transgender patients with skilled pelvic health physical therapy and adequate medical equipment. In 2019, a $40,000 grant went to the hospital's Sojourn Chaplaincy, which works with trans patients and women seeking abortions.

San Francisco resident Nesi Mafuaofa, 32, a transgender woman who is of Black, Tongan, and Samoan ancestry, has been a patient of the physical therapy program for a year. Her primary care doctor referred her to it due to her experiencing issues following her gender reassignment surgery.

"You have no idea how helpful it has been," she told the B.A.R. by phone.

Mafuaofa was finding it extremely painful to use the dilators she needed to insert into her vagina to ensure it did not close up as she healed. The program's staff taught her how to relax and release her stress and tension. Last month, they also provided her with a new dilator design to test out that Mafuaofa called "amazing" after using it for just a day.

"I think the clinic is amazing. I love the fact it is so warm and accepting. They make you feel like you are not going to a hospital," said Mafuaofa, who works for a property management company and part-time at a nursing home. "I had a lot of emotional trauma at hospitals and from doctors at other clinics and dentist visits. It is very refreshing to come to a place where I know I am respected and people give a damn."

Hearts on display
The event's smaller tabletop and mini hearts can be seen in the windows of the Flood Building at 870 Market Street through February 14. The six large hearts are on display in Union Square and most will remain on view through October 31.

A map detailing where all of the publicly displayed hearts bought over the years are located can be found at https://sfghf.org/hearts-in-sf-2/

"As the city opens up carefully and people go out for walks, as we can do masked and socially distanced, it is a place people can go and take their family for a walk and enjoy this really iconic art collection that is the largest public art collection in our country," said Meredith.

Dallabrida hopes the buyer of his heart will continue to note how Jarmen inspired it. Because it is made of ceramic, he predicted it would last for millennia.

"Using it in the context of telling a story, especially telling a story about our lives and my life, there is a hope that story will continue on," he said.

As for Petro, she hopes her heart ends up somewhere like a lobby or waiting area where people have time to spend to carefully observe her artwork.

"You really have to walk around it and walk around it and look at it to get the details," said Petro, who painted her heart at Engine 43 Art Studio, the former firehouse in the Excelsior where the movie "The Princess Diaries" was filmed. "Everyone kept going around and around looking at different things, saying, 'Hey, did you see this?'"

For more information about this year's event and all of the participating artists and their heart designs, visit https://sfghf.org/hearts-in-sf-2021/