Out in the World: French LGBTQ preservationists push back against government 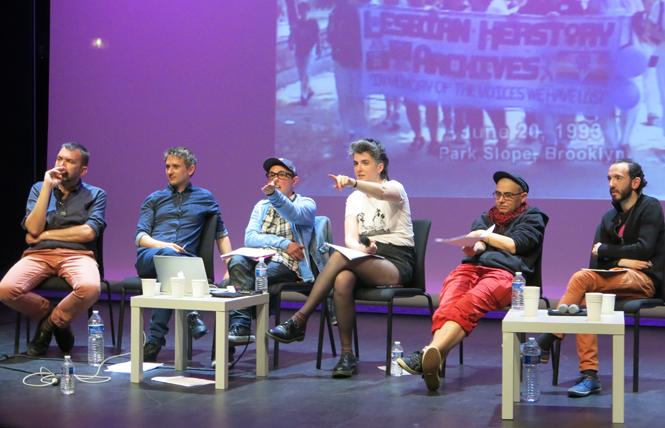 French LGBTQ cultural preservationists are standing their ground against the French government in their effort to establish an independent LGBTQ history archive and center in Paris.

The Collectif Archives LGBTQI's resistance is being met with unprecedented support from 45 established LGBTQ historical archives and museums from 22 countries that signed onto a forceful rebuttal to French officials published by national French newspaper Liberation January 8.

The GLBT Historical Society in San Francisco, Paris' sister city, was one of the institutions that signed the letter.

"It is important that we ourselves must be the keepers of our own stories and artifacts and oversee these institutions," Terry Beswick, executive director of the GLBT Historical Society, told the Bay Area Reporter January 11.

The open letter marked the first time LGBTQ historical institutions established a charter outlining best practices and principles that each subscribe to for recovering LGBTQ history across borders and cultures.

The collective is a group of 20 queer French organizations and more than 100 academics, cultural experts, historians, and community members who called upon the French government to give the archive autonomy.

The collective cited 50 years of established, successful independent community-led historical archives and museums that it proposed to emulate with its Paris archives and center.

Currently, there is no LGBTQ historical archives or center in France's capital city, making it one of the few in the western world to be devoid of such an institution.

The French Ministry of Culture commission's December 29 response to a proposal to establish the LGBTQ history archive and center sparked the movement calling for the collective to retain autonomy.

Gay French Member of Parliament Raphael Gerard presented the proposal to the assembly in September.

The commission approved of the collective's idea for a queer archive and center in Paris, but it wants to take control away from the collective and hand it to the French National Archives under the Interministerial Service of the Archives of France, according to its response.

A majority of France's cultural institutions are governed by the Ministry of Culture, which is funded by taxes.

However, the traditional way France manages cultural institutions does not sit well with collective members or other LGBTQ historical institutions.

"No, the state has been the problem. It has been one of the chief places that has persecuted us, excluded us, and erased us," said Gerard Koskovich, a queer public historian in San Francisco who has worked in the field of LGBTQ archives for nearly 40 years. "We are the experts on our own history."

Koskovich, who is a founding member of the GLBT Historical Society, has witnessed and occasionally assisted attempts to establish establish a queer history archive and center in Paris since the 1980s when he was a Stanford graduate student living in the City of Lights.

For nearly 25 years, the San Francisco resident has taken up a home in Paris for several months out of the year and is a member of the collective.

He welcomes the French government's assistance with the archive and center, "but it is not going to be in charge of making the decisions about what our history is or what should be preserved," he said.

Renaud Chantraine, a founding member of the collective, said France should serve as an ally.

"The role of the state is not to displace community-based LGBTQ history organizations, but to serve as a respectful partner in our important cultural work," the doctoral candidate at the Ecole des Hautes Etudes en Sciences Sociales in Paris, stated in the January 11 release from the organization.

The collective cited Amsterdam's IHLIA LGBT Heritage (formerly known as International Homo/Lesbian Information Center and Archive), which receives around $730,000 (€600,000), and Berlin's Schwules Museum, which receives more than $680,000 (€559,367), in government support, respectively, the collective stated in a September 25 release campaigning for independence.

Collective member Sam Bourcier, a queer nonbinary transgender feminist activist and a professor of queer studies at Lille University, estimated that establishing the LGBTQ archive and center, not including rent, would cost $182,502 (€150,000). Bourcier, who uses he/him pronouns, projected the budget would increase to about $1.2 million (€1 million) in the future, he wrote in an email interview from Rome to the B.A.R.

Beswick agreed with Chantraine, adding that the LGBTQ community does not want to be dependent upon government money where strings are attached, and political politicking and trends easily shift.

Collective members pointed out in September that establishing the French LGBTQ history archive and center as an independent organization would not be the first time the government supported community-led organizations.

The Association for the Research and Archiving of Armenian Memory and the Paris Yiddish Center enjoy the French government's financial support but are not governed by the cultural ministry, the collective pointed out in September.

Why independence?
"Erasure is still an issue for our community," said Beswick, a gay man who hopes the GLBT Historical Society's support can provide credibility that the collective can leverage for the project.

The longtime HIV/AIDS activist recalled the action gay men took during the HIV/AIDS crisis of the 1980s and equated it with the activity the LGBTQ historical preservation movement champions today.

Beswick and Koskovich recalled the 1933 destruction of Berlin's Magnus Hirschfeld Society and its Museum of Sex by the Nazis.

Founded in 1919, the Magnus Hirschfeld Society at the time held the largest archive and library of LGBTQ history, Koskovich said.

Nearly 60 years later, Berlin re-established the Magnus-Hirschfeld-Gesellschaft Center in 1992. The center also signed onto the letter in support of the collective.

The two men did not mention the January 6 insurrection that unfolded in Washington, D.C. or the erasure of LGBTQ rights in the United States and globally during President Donald Trump's administration.

Beswick simply said, "It's hard to really see into the future whether some conservative party might decide that it is no longer appropriate to spend funding on this kind of stuff and could end up destroying it.

"That's why it is important that we maintain our independence," he explained about why he signed onto the Paris collective's open letter. "We certainly support efforts like that around the world."

The collective's understanding of the importance to maintain independence resounded in its release that again called for the French government to allow the LGBTQ archive and center to have autonomy.

Citing the shared basic charter for the work of queer community historians, the collective stated the central point was, "The reconstitution of our lost and erased queer past must be entrusted to independent institutions conceived and directed by the LGBTQI community itself."

The time is now
France, especially Paris, has a rich queer culture in the American imagination, but the reality is the country's queer community culturally thrived but politically lagged, said Koskovich, pointing to more progressive European countries, like The Netherlands and Germany.

France's LGBTQ community has attempted to find, preserve, and share its culture with the public for nearly 50 years.

"There has been a lot of talk and a lot of reasons why it has not happened yet," Koskovich told the B.A.R.

Koskovich said since the 1970s, when the first queer history archive was established in Paris and disappeared into history, all six attempts to create an institution have failed.

Bourcier and Koskovich said politics, the HIV/AIDS epidemic, mismanagement, misogyny, and French nationalism kept Paris from opening its own queer history center. Even when Paris had a gay mayor, Bertrand Delanoe (2001-2014), and some closeted and openly LGBTQ ministers of culture, an LGBTQ history archive and center could not be established in Paris.

Bourcier, who like Koskovich was involved with that period's attempt to establish a queer history project, accused Delanoe of ruining it.

"I guess it is because at the time [Delanoe]'s fear was to be accused of communitarianism, wrote Bourcier.

Bourcier and Koskovich believe that times have changed. Support for LGBTQ rights is trendy, and the pink dollar is attractive. The collective established in 2017 is open to all members of the community. Many of France's politicians are on board with the project due to three years of building relationships and lobbying for support while maintaining independence.

Something that was not accomplished quite the same way in the past. Prior political ties to France's Socialist Party smacked of exclusiveness, Bourcier explained.

In 2016, the French National Archives became involved. More recently, Jean-Luc Romero-Michel, Paris' deputy against discrimination, publicly committed the city's government to the collective's vision and designated the collective as owner of the project, according to the collective's September 25 news release.

The collective has demonstrated success with its programs. Its podcast (https://podcast.ausha.co/la-fievre-annonce) has garnered more than 30,000 listeners in less than a year, Bourcier noted.

The collective has formally requested a meeting with Bachelot to gain support to establish an autonomous archive and center, according to the recent release. The meeting is in addition to its rebuttal to the commissions' proposal response.

A meeting has not been scheduled yet.

For more information about the Collectif Archives LGBTQI, visit https://archiveslgbtqi.fr