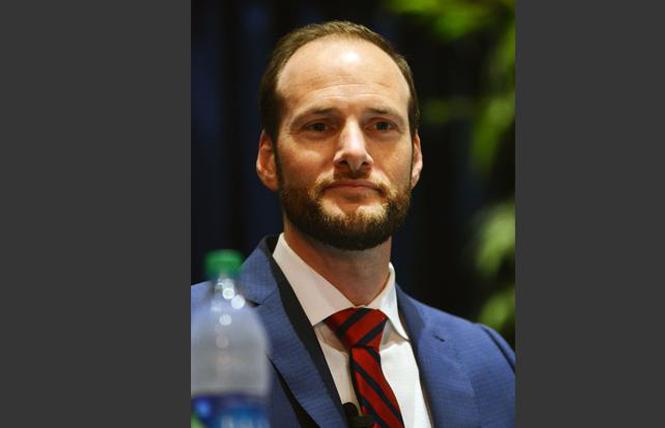 San Francisco District Attorney Chesa Boudin, who campaigned on a criminal justice reform platform, is facing heightened scrutiny in the wake of a parolee allegedly involved in a hit-and-run incident that killed two pedestrians in the South of Market neighborhood on New Year's Eve.

Those criticisms include a petition calling on Boudin to resign.

Police arrested San Francisco resident Troy Ramon McAlister, 45, on December 31 for driving under the influence after a reported stolen vehicle he was driving allegedly struck Elizabeth Platt, 60, and Hanako Abe, 27, while they entered a crosswalk at Mission and Second streets.

Boudin's office charged McAlister with a series of felonies January 4 related to the deaths of Platt and Abe, including two counts of vehicular manslaughter while intoxicated (McAlister pleaded not guilty in court January 5) — but at issue for Boudin's critics is the fact that McAlister was arrested several times in recent months, including for car theft and auto burglary, but was not charged.

McAlister, who was paroled in April, was arrested again in June, August, October, November, and on December 20. Boudin said some of these were referred to the California Department of Corrections and Rehabilitation.

Neither Boudin's office nor the San Francisco Police Department responded to requests for comment for this story.

Tony Montoya, a gay man who is the president of the San Francisco Police Officers Association, also did not respond to a request for comment. He did say during a KPIX-TV interview, however, that Boudin should have recused himself from this case because he once defended McAlister during the top prosecutor's time at the public defender's office.

Indeed in 2018, Boudin was listed as McAlister's public defender during a court hearing after McAlister was accused of robbery. But according to a January 5 statement by Public Defender Mano Raju, it would be a mischaracterization to claim this constitutes representing McAlister.

"Chesa Boudin never represented Troy McAlister. Some are misinterpreting court minutes that show Mr. Boudin as 'special[ly] ... appearing for the attorney of record' on a 'motion to continue,' but this was strictly an administrative appearance that lawyers routinely make when a colleague is unavailable on an uncontested matter," Raju stated.

"On the date at issue here, Mr. McAlister's lawyer was in trial in another case and she filed the motion to continue as a result." Raju added. "It is common for attorneys to make 'stand-in' appearances on behalf of an unavailable colleague. Mr. Boudin was apparently such a 'stand-in' on an uncontested postponement of the case to a new date. He would not have had any confidential information nor presented any arguments on Mr. McAlister's behalf. Our overburdened courts could scarcely function without such courtesies."

In the wake of the deaths, District 2 Supervisor Catherine Stefani has requested a hearing to analyze the city's public safety protocols and policies. In a Facebook post January 5, gay District 8 Supervisor Rafael Mandelman said he has requested to co-sponsor this hearing.

"This hearing is necessary. It is necessary because two women — Hanako Abe and Elizabeth Platt — are dead who did not have to die, and we need to understand what happened and how. And it is necessary because we need to understand if this tragedy is an isolated one or, as many of us fear, one that reflects broader policy and administrative failures. We must ask the uncomfortable questions, and we must be willing to pursue those questions even when they lead to uncomfortable places," Mandelman wrote.

"We proceed at our peril, and at the peril of the project of reform, if our people come to believe that reform and safety are incompatible. And that is why I believe it is so important that we dig in to understand how Troy McAllister came to crash a stolen car into Ms. Abe and Ms. Platt on New Year's Eve," he added.

Resignation petition picks up steam
A petition on Change.org calling upon Boudin to resign has garnered 6,190 signatures out of a goal of 7,500 as of the afternoon of January 5. Richie Greenberg, a business adviser and activist who in 2018 was a Republican candidate for mayor, started the petition late January 2.

"Mr. Boudin has been in office barely a year, and in his disastrous social experiment of criminal justice 'reform' and the so-called restorative justice model, he has instead dismantled the criminal justice system," the petition states before it goes on to address the New Year's Eve deaths. "The time has finally come for a mass call to action. Residents and business owners are fleeing. People are literally dying. Join Us In Demanding DA Chesa Boudin Resign. Show your support and sign this petition to demand San Francisco District Attorney Chesa Boudin leave office."

Greenberg told the B.A.R. that "enough is enough." When he was asked if he was surprised at the traction his petition has garnered, he said "yes and no."

"At the beginning it didn't have traction, but it was a Saturday night," Greenberg said. "But I shouldn't be surprised at the dissatisfaction and shock at Chesa being at the helm of the DA's office."

Greenberg said he has been involved in efforts to recall Boudin, but that the COVID-19 lockdown makes it much more difficult than usual to gather the requisite signatures to get a recall on the ballot. Because of that, the petition asks for Boudin to resign.

"The recall is dead-in-the-water, dormant, and on-hold since we don't have the ability to get signatures," Greenberg said. "Our democracy is being suppressed as long as the city mandates shelter-in-place."

Joel Engardio, a gay man who is the vice president of Stop Crime SF and who ran for District 7 supervisor last year, issued a statement from the group January 5 saying that "if an elected prosecutor fails to keep residents safe, voters must hold them accountable at the ballot box."

When asked what holding Boudin accountable means, Engardio told the B.A.R. that he is not supportive of a recall effort at this time.

"I think there's been a lot of talk of a recall and I think that's premature," Engardio said in a phone interview. "We are not involved with the recall effort. It's too soon, but what we can do is hope that this incident is a wake-up call for Boudin so that he pays more attention to the victims of crime and doesn't let repeat offenders fall through the cracks."

Engardio said that he is not opposed to everything on the agenda of the self-styled progressive prosecutor.

"We agree with many of the reform efforts of District Attorney Boudin," Engardio said of his group. "We think they are needed, but as he pursues reforms he has to be more balanced so it doesn't hurt public safety."

For his part, Boudin said in a contentious interview on KGO-TV that his office didn't think adding charges was the best way to reduce McAlister's recidivism.

"Mr. McAlister will be held accountable," Boudin said during the interview, adding that "there are numerous law enforce agencies and we all have to depend on each other to do the job properly."

Boudin said that Daly City police knew McAlister's name and address from the woman whose stolen car he allegedly used in the New Year's Eve deaths, but that the San Mateo County law enforcement agency did not plan to act until after the New Year's holiday.

The Daly City Police Department did not respond to a request for comment.