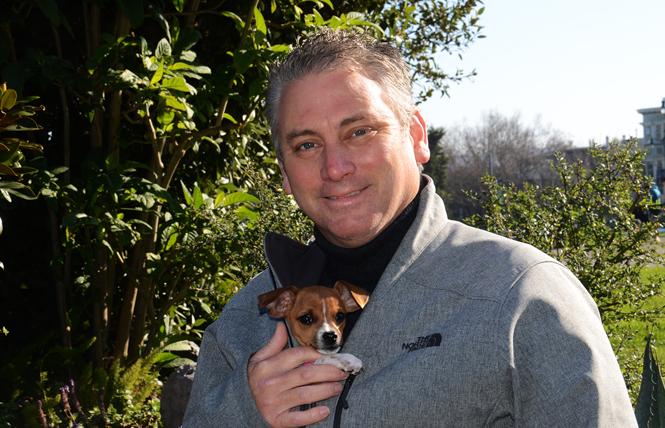 San Francisco's District 8, which includes the Castro, Noe Valley, and other neighborhoods, has a new public safety liaison.

Working through the civilian arm of the San Francisco Police Department, David Burke started in the position in late November. He was introduced to members of the Castro Merchants at their December 3 meeting.

Burke, 54, is a straight ally who has been active for years in the Duboce Triangle Neighborhood Association. He replaced Jessica Closson — another straight ally who had started in the role in 2019 — after she and her family moved to Seattle last year.

Burke focuses on crime prevention and safety, and facilitates communication between District 8 residents and businesses, the police, and the supervisor's office.

"Burke was hired by the San Francisco Police Department; he's their employee but I recommended him," gay District 8 Supervisor Rafael Mandelman told the Bay Area Reporter. "He is a concerned dad in the Duboce Triangle and has a wealth of experience in city government."

District 8 got the funding for the community liaison through $75,000 that was secured by gay former Supervisor Jeff Sheehy in 2018.

Mandelman said he's known Burke for years — "long before I was a supervisor."

"He knows most of the processes and the players and he's passionate about getting help for the most challenged and challenging folks on our streets and helping neighbors with public safety and other issues that arise in D8," Mandelman added.

Burke also spoke with the B.A.R.

"Rafael had talked to a mutual friend of mine that the position would be vacant and available," Burke said. "I loved my work at the city attorney's office for eight years, but I loved the opportunity to get out and solve problems."

Burke worked at the city attorney's office as "a private investigator for the city," working on issues "as mundane as someone who slipped and fell on a city sidewalk all the way to litigating cases, slum lords. It ran the gamut."

Before working for the city attorney's office, Burke worked for the district attorney's office for five years as part of the Brady unit, which reviews police personnel files. He was hired for that role by then-San Francisco District Attorney Kamala Harris, now the outgoing U.S. senator from California and the vice president-elect.

"I have a great photo of my daughter, just a few months old, at a DA picnic," Burke recalled. "She was a spitter-upper, and seconds after they grabbed her back from Kamala, she threw up all over and I said 'thank you for not throwing up all over my boss,' who is now going to be vice president of the United States."

Burke's wife, Yvonne, is still with the city attorney's office, he said. The couple live in the Duboce Triangle neighborhood with his mother-in-law, now 12-year-old daughter, "and a dog named Daisy."

"She's a rescue so the guess is that she's a Yorkie and Chihuahua mix," Burke wrote in a follow-up message about his pooch.

Burke said that the intergenerational living situation is something he's "grown to appreciate" even if it isn't what he was raised with. "It's a source of great humor," he said.

He said that Closson "did a very good job," and that he will continue her work organizing public safety meetings and trying to connect people with services. Closson also came to the liaison post through SFPD's civilian branch.

Burke hopes to get more involved in the community after the COVID-19 pandemic ends, though he added "it's surprising how much you can get done remotely."

"Cities decay and die block by block," Burke said. "They're saved the same way. A lot of people feel very powerless about their businesses and homes, so how can we address it? None of us are at our best in the pandemic, and the city is in a tough spot, but we can do better. I really do feel that way."

Masood Samereie, a straight ally who is the president of the Castro Merchants business group, indicated that he is pleased with the choice. Burke; Mandelman aide Tom Temprano, a gay man; and Matthew Donahue, a bisexual man who's an assistant district attorney and was recently named the DA office's District 8 liaison, have joined Samereie on merchant walks in the Castro. .

"His experience at the DA's office would make him a great asset for us in communication with the DA and SFPD," Samereie recently stated to the B.A.R. "I have met with Mr. Burke, and have started our monthly merchant walk with him, Matthew Donahue, and Tom Temprano last week."