Out in the World: Religious leaders call for end to violence against LGBTQ people 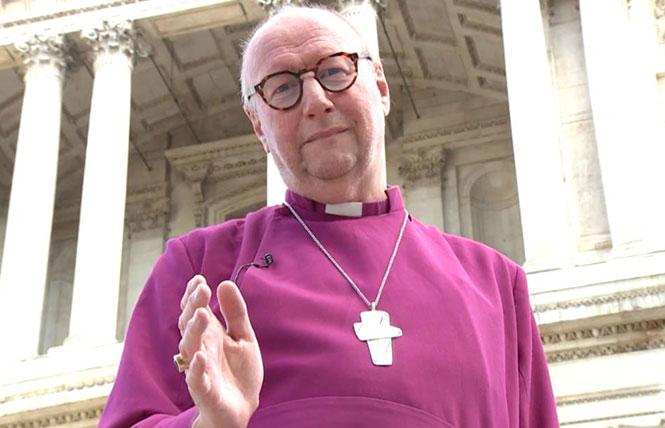 The Right Reverend Paul Bayes, the Anglican bishop of Liverpool, appeared in a video accompanying the declaration calling for the end of violence against LGBTQ people. Photo: Courtesy CNN

Hundreds of religious leaders representing the major world faiths have called upon countries to end conversion therapy and violence against LGBTQ people, and to decriminalize homosexuality.

The faith leaders also sought for countries to seek justice on behalf of the victims.

The declaration was presented at the launch of the Global Interfaith Commission on LGBT+ Lives during a virtual conference hosted in the U.K. December 16.

Jayne Ozanne, director of the commission, called the declaration a landmark.

"We've never had such a powerful, clear, and supportive statement from so many leaders," she told CNN.

"There are many LGBT+ people who suffer emotional hurt and physical violence to the point of death in countries across the world," stated Furth in a news release. "For this reason, we are joining forces as faith leaders to say that we are all beloved children of God."

The religious leaders pledged to lead with "love and compassion," stating in the declaration that "hatred can have no place in religion."

The conference was hosted and backed by the British foreign ministry's Commonwealth and Development Office.

In 2018, Theresa May, then-prime minister of the United Kingdom, apologized for the country's colonial era anti-sodomy laws used against LGBTQ communities in many of the now-Commonwealth countries.

Conversion therapy attempts to change a person's sexual orientation or gender identity through a variety of practices including, but not limited to, religious counsel, institutionalization, and electroshock.

The practice has been widely condemned by the United Nations, the American Medical Association, and numerous other groups.

Only two Australian territories and 20 states in the United States have banned the practice for minors, including California.

Lawmakers in Canada and the U.K. are currently considering legislation to ban the practice.

In July, U.K. Prime Minster Boris Johnson called conversion therapy "absolutely abhorrent" and announced plans to ban the practice following a study. The study has not been released.

Reports published by the U.N., OutRight Action International, and other organizations have documented the horror and damage caused by conversion therapy.

The organizations have called for a global ban of the practice.

Declaration
The religious commission's declaration recognized the pain and suffering caused to LGBTQ people due to religious teachings in the past and present.

Right Reverend Paul Bayes, the Anglican bishop of Liverpool who is co-chair of the commission, said things must change.

"For too long, religious teachings have been misused — and are still being misused — to cause deep pain and offence to those who are lesbian, gay, bisexual, transgender, queer, and intersex," he stated.

Religious leaders asked for forgiveness from survivors of conversion therapy and violence perpetrated against them due to past religious teachings.

However, some signatories expressed challenges.

LGBTQ rights have caused a bitter rift in the Anglican Communion and there has been resistance from some Muslim faith leaders and communities.

Peter Lynas, U.K. director of the Evangelical Alliance, which represents 3,000 churches, told the BBC that a ban could risk "criminalizing counselors, pastors, and even those asked to pray with people."

Dilwar Hussain, the chair of New Horizons in British Islam, told the Guardian that getting Muslim organizations to engage with LGBTQ justice was challenging despite discussions within the community about equality and prejudice.

"If we're going to be serious about addressing issues of justice and injustice in our society, we've got to have an argument that's morally consistent," he said.

"I think the Muslim community is ready for this conversation," Hendricks, who is currently training six imams in Africa, told Reuters. "The openness to look at this issue (is incredible)."

By December 21, 1,130 signatories from more than 55 countries publicly signed on to the declaration; another 80 individuals signed privately, according to the commission's website.

The signatories include 15 archbishops, 77 bishops, 29 deans, and nearly 100 rabbis along with many other senior representatives of Christian denominations and other faith traditions.

For more information and to sign the declaration, visit https://globalinterfaith.lgbt

"This is a dark day for Hungary's LGBTQ community and a dark day for human rights," said David Vig, director of Amnesty Hungary, in a December 15 joint statement with International Lesbian, Gay, Bisexual, Trans and Intersex Association and Transgender Europe, following the passage of the laws.

"We are deeply concerned for the health and safety of trans children and adults in Hungary in such a hostile climate," stated TGEU Executive Director Masen Davis.

Hungary's LGBTQ community has been under assault throughout 2020.

In May, lawmakers stripped transgender individuals of the ability to legally change their identity on government-issued documents.

There are some exceptions for single people wanting to adopt. Applications have to be reviewed by Hungary's family affairs minister Katalin Novak, an ultra-conservative who promotes traditional family values.

Parliament also passed a law forcing transgender and intersex individuals to legally identify with their gender assigned at birth.

HRC's David called upon Hungary's leaders to "right this wrong by reversing these antiquated and harmful laws."

Davis has asked European Union Commission President Ursula von der Leyen to "address the rights of LGBT parents, the attempt to erase gender diverse children, and the ban on legal gender recognition in the Commission's rule of law assessment and on-going Article 7 TEU proceedings against Hungary."

Hungary's LGBTQ community has vowed to fight the discriminatory laws.

The legal arm of the association was preparing to challenge the law, Dudits said.

"Our legal aid service is prepared to act if any kind of discrimination is reported to us, and we are ready to challenge any unlawful rejections in court," Dudits told the AP.

The laws granting more power to Orban are set to come into force after Hungary's election in 2023, reported the Washington Post.

Like political leaders in Poland, Orban campaigns on anti-LGBTQ rhetoric and has been cracking down on queer rights, especially during the global pandemic.

His party, the Fidesz, has been in power for a decade.

Earlier this year, the E.U. rejected funding to some Polish cities that claimed to be "LGBT-free zones," due to the cities not meeting the union's human rights standards.

Striking back, Hungary and Poland were locked in a fight against the E.U., blocking a $2.2 trillion spending plan that included a COVID-19 relief bill.

The two conservative countries struck a deal with the E.U. in mid-December.

Hypocrisy
Passage of Hungary's new laws and the deal with the E.U. comes weeks after a major political scandal.

Szajer is also the architect of Hungary's 2012 Constitution, which included a ban on same-sex marriage, and participated in crafting many of Hungary's anti-gay laws. (Civil unions are legal in Hungary.)

He was also caught with drugs in his backpack, which he denied were his.

About 25 men — including two unidentified conservative European People's Party diplomats — attended the party above a gay bar in the center of the city.

David Manzheley, the party organizer, told Belgian newspaper HLN that Szajer was a plus-one of another party guest.

An unidentified person close to Szajer told the Guardian that his sexuality was "considered an 'open secret' among Fidesz circles."

Szajer, who is married to Tunde Hando, a judge on Hungary's Constitutional Court and the former director of the National Judiciary Office, resigned November 29. They have a daughter.

"We are happy to see this law pass before the end of the year," said TGEU's Davis in a December 18 statement following the announcement.

Davis welcomed the good news following a harsh year for transgender people around the world in 2020.

"It offers our communities some hope to see the Swiss example," he said.

Swiss transgender and intersex individuals will soon possibly be able to simply self-declare their gender and legally change their name and gender marker at the civil registry office for a fee $85 (75 CHF), according to the TGEU news release.

It will be a significant change from the current process where transgender and intersex individuals have to go to court. The cost for that is around $1,130 (1,000 CHF).

The Swiss Federal Council will announce a date for the law to go into force if it is not challenged by a referendum in the coming months, according to the statement.

Youth under the age of 16 will need consent from a parent or guardian to claim self-determination of their gender, something that they did not have to do before.

Swiss transgender activists called the change in the law discrimination against transgender youth.

"We hope Swiss lawmakers will reconsider the issue and ensure that [legal gender recognition] is available to everyone on the basis of self-determination, without age limitations in place," TGEU policy officer Jonas Hamm stated in the release.