SFPD to pay $150K to trans sergeant in bias case 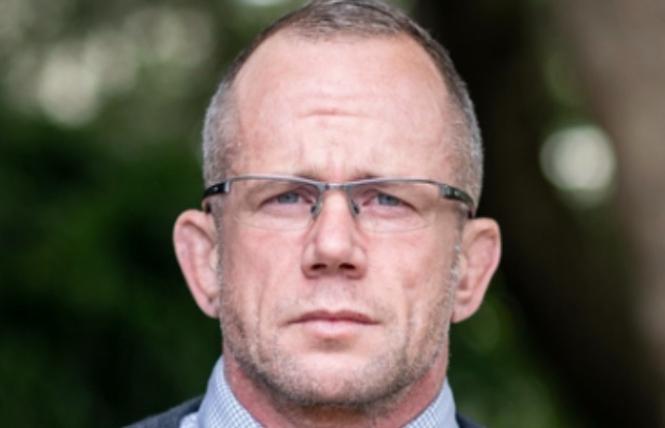 The City and County of San Francisco has reached a $150,000 settlement with a transgender police sergeant in his workplace harassment case.

After Sergeant Flint Paul received gender-affirming surgery in 2006, he was referred to with female pronouns and colleagues called him by his former name, including on the police department radio, he said.

Now, the city has settled with Paul — $50,000 of the money will go toward legal fees — according to court documents, and will also attempt to redress systemic transphobia. Both the San Francisco Police Commission and the Board of Supervisors have approved the settlement.

"As part of the settlement, the San Francisco Police Department will adopt explicit prohibitions against misgendering and other robust protections for transgender and gender-nonconforming police officers," a joint news release from Impact Fund and Legal Aid at Work issued December 22 states. "The city will also conduct training on investigating workplace complaints filed by transgender city employees for staff at the Department of Human Resources."

The Impact Fund noted that employers can't discriminate against workers because of their gender identity. Earlier this month, as the Bay Area Reporter previously reported, the Police Commission passed a revised, gender-neutral grooming standards policy that allows all officers to wear earrings. The change came months after a nonbinary police officer was sent home for insubordination for wearing earrings.

"Under California law, an employer cannot harass or discriminate against a transgender employee because of their gender identity," Lindsay Nako, a straight ally who is the director of litigation and training at the Impact Fund, which represented Paul along with Legal Aid at Work, stated. "This includes refusing to use a transgender worker's chosen name and appropriate pronouns. The harmful misgendering that Sergeant Paul experienced created a hostile work environment and interfered with his ability to perform his job. That's harassment, and it is illegal."

Paul told the B.A.R. in a December 21 interview that he has been with the SFPD since April 1995.

"I had been in for about 10 years before I made the transition official at work," Paul said. "I felt like part of the team and after transitioning I thought I'd give people time to get used to the change, but a few months became years."

Paul said that during those years, he was not only repeatedly misgendered but that superiors "outed" his trans status to other colleagues who'd been unaware.

"It felt isolating," Paul said. "I was worried I'd be called 'she' and I felt very paralyzed and didn't feel welcome anymore. I started wanting to work alone."

Despite a prior settlement with the city in 2012, the misgendering did not stop. Paul thought a 2013 move from Bayview Station to Mission Station would help.

"I had already changed my name and a lot of people didn't know me so I thought 'this is great,'" Paul said. "But I was then misgendered in the line-up around people who didn't know who I was."

In May 2017, Paul filed a discrimination complaint with the city's Department of Human Resources. Later that year, he filed a complaint of discrimination and retaliation with the United States Equal Employment Opportunity Commission and the California Department of Fair Employment and Housing. These were followed up by subsequent filings with both the city and the federal and state governments, respectively, in 2018.

A new department bulletin, approved as part of the settlement, will be issued in the next few months, the settlement agreement states, to "include language addressing the harmful effects of misgendering on a transgender person."

A copy of that bulletin as proposed, obtained by the B.A.R., states that "members may not harass, discriminate, or retaliate against anyone based on their actual or perceived gender identity, gender expression, or transgender or transitioning status."

In its section on transitioning, the proposed bulletin states that supervisors and human resources staff "must foster a respectful work environment for transitioning individuals."

"Supervisors (lieutenants and above) and human resources staff will use the City's Gender Transition Guidelines, which demonstrate the way the department should handle a member's transition in the workplace," the proposed bulletin states. "The department will only disclose a transitioning member's new name and pronoun(s). All other protected information about the member remains confidential and members must not discuss or release that information without the transitioning member's prior consent, as noted in the confidentiality section of this policy."

Paul, when asked if he thinks justice has been served, expressed cautious optimism.

"I guess we'll wait and see," said Paul, who still works out of Mission Station. "I'm semi-confident, but I have been in the past and things didn't change. I'm hopeful."

SFPD referred the B.A.R. to the city attorney's office, which responded to a request for comment after the initial publication of this story.

"The city determined that this settlement is a reasonable and prudent resolution to this case to eliminate the inherent cost of further litigation. There is no admission of liability on the part of the department," John Coté, the communications director for the city attorney's office stated in an email. "The city's Gender Inclusion Policy, issued in June 2018, requires that all employees, applicants, and contactors must be addressed by the names and pronouns they choose."

Updated, 12/22/20: This article was updated to include comments from the city attorney's office.