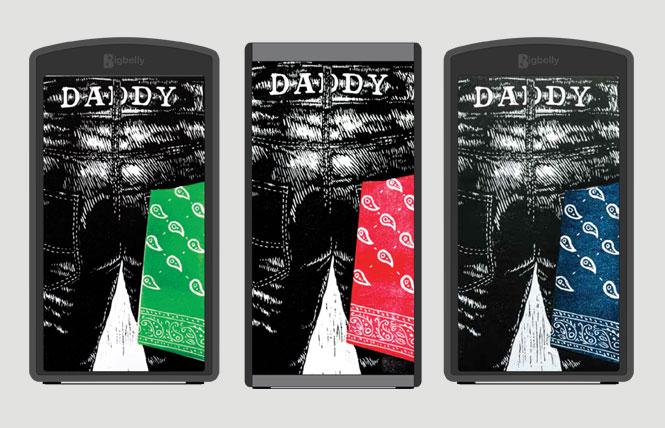 Art depicting the hanky code was apparently too much for the SOMA West CBD's art project to decorate trash cans.

The decision to exclude certain kink- and leather-inspired art pieces from public display has drawn allegations of censorship against the SOMA West Community Benefit District.

Dorian Katz, an artist of one of five pieces of art submitted to the SOMA West CBD, said she was told that her piece would be featured on a new trash receptacle at the southwest corner of 11th and Harrison streets, only to find out that it was not there.

"We were told the exact location of where each trash can was going to be," Katz, a queer, bisexual dyke who paints under the name Poppers the Pony, told the Bay Area Reporter. "We were paid for our work, and in September people went out to see them and one-third of us went out to find our art was not up."

Justin Hall, a gay artist, bicycled to the trash bin at the southeast corner of Ninth and Folsom Streets, where his art was supposed to be displayed. His art depicted people in bondage.

"I found out that it wasn't there," Hall said. "I felt very hurt and offended that my art would be pulled without notice, without a chance to change the art."

Katz noted that two of the rejected pieces of art featured handkerchiefs. The handkerchief, or hanky, code developed in the 1970s as a way for gay men looking for casual sex to indicate what sex act and position they were seeking via the display of a handkerchief of a certain color, and in a certain back pocket.

The late Alan Selby, who was known as the "mayor of Folsom Street" and founder of Mr. S Leather (which is still at the intersection of Eighth and Harrison streets), claimed to have started the hanky code.

The art had been commissioned to decorate the new Bigbelly trash cans popping up all over San Francisco, including in the South of Market district. These new, smart trash receptacles compact waste and are nearly impossible to rummage through.

Christian Martin, the executive director of the SOMA West CBD, stated in an email to the B.A.R. that the organization reached out to the Leather and LGBTQ Cultural District, among other community groups, to facilitate art for the Bigbelly trash cans in the spring.

"Right at the onset of COVID, we reached out to [Robert] Goldfarb at the leather district to see if they would be interested in co-branding with SOMA West CBD to decorate some of the Bigbelly trash cans with art from local artists," Martin, a straight ally, stated. "He enthusiastically said yes and began to reach out to local artists who may be interested in submitting art for the project. We also reached out to the Filipino Cultural District and other individual artists for submissions."

But the CBD could not use all the submissions, he stated.

"We received more leather LGBTQ-themed submissions than anticipated and unfortunately, we couldn't use them all," Martin wrote. "We were on a very short timeline and did not have time to do an official call for artists. If we had more time, we would have made clear that we reserved the right to choose (or not choose) whatever art we wanted, and that we could not guarantee that every submission would be selected. I've apologized and taken responsibility for not making that clear. We did make sure that each artist was compensated fairly for their time and work, whether we used the images or not."

When pressed in a phone interview, Martin said that while "each piece of art was judged independently ... the hanky code depiction was raised as a concern that some might have."

Martin stressed that other LGBTQ and/or BDSM-affirmative imagery was chosen for the trash bins, among art representing other communities. Some displayed art features the now-shuttered queer bar The Stud, the now-scant "Miracle Mile" that was once full of gay bars and bathhouses, the Powerhouse, a jock strap, and bondage gear.

Martin said that since the art display is rotating, the artists whose works were rejected have been "reserved a spot in the next round."

After being asked about the hanky code, SOMA West CBD board member Brandon McGanty said not all of the art was intended for final display. McGanty did not respond to a question about how he identifies.

"Not all artwork was intended to make it to print," he said. "After reviewing all of the submissions, the committee overseeing this project narrowed down the final selection as a group."

Hall accused McGanty of being the member of the SOMA West CBD board who had a problem with the hanky code, which led to the alleged censorship.

According to Hall, McGanty went to the printer to stop the production of the art.

When pressed by a B.A.R. reporter, McGanty would not answer if he, or anyone else, was the one who raised concerns about the hanky code.

'Miscommunication'
Katz had learned where her art was to be displayed from Goldfarb, a gay man who is the president of the Leather and LGBTQ Cultural District. Goldfarb chalked up the situation to miscommunication between the West SOMA CBD and the artists. The SOMA West CBD was established last year.

"The situation with the SOMA West CBD is complicated, and related to both miscommunication and the growing pains of a new organization," Goldfarb wrote in an email to the B.A.R. "The objective of the CBD's executive director, Christian Martin, was to do something positive and provide a way to put leather and LGBTQ art on public display. Unfortunately, as a new organization, they had not yet developed a set of standard criteria for their art projects, which might have avoided the current situation."

Goldfarb stated that "the CBD's intent was to get art by these artists on public view while satisfying their board."

"Some designs were not used, which led to a meeting between three affected artists, Christian Martin, and me. Possible resolutions to the situation were discussed as well as ways to avoid a repeat in the future. My recollection is that the CBD's offers included a pledge for better communication, a pledge to pay for new art or revisions, and an agreement to produce a set of standards for their art," Goldfarb wrote.

"We view the situation as still in the process of being resolved and my expectation is that we will meet with the CBD again when they develop clear standards," he added. "It's even possible that when they shine a light on their objections, some of them may fall away."

Hall, who was present for that meeting, said he is satisfied with how the situation turned out to the extent that he hopes policies will be put in place so that a similar situation does not happen again, adding that "Christian was very transparent and took the blame where necessary."

Two of the other three artists whose pieces of work were not included on the Bigbelly trash cans were also contacted by the B.A.R. but did not respond to requests for comment as of press time.