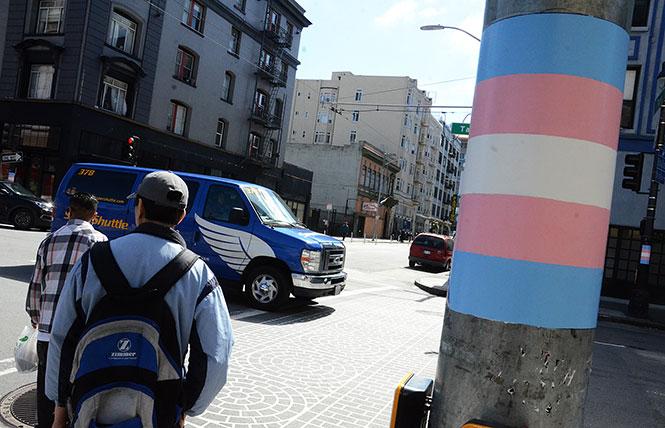 San Francisco is accepting proposals for $1.6 million in grants to the trans community. Above, trans flag colors are painted on light poles in the Transgender District. Photo: Rick Gerharter

San Francisco officials are seeking proposals for $1.6 million to be awarded over the next two years aimed at boosting the lives of Black transgender residents and other LGBTQ people of color.

Monday the city's Human Rights Commission opened up the process for nonprofits and social service agencies to submit proposals for $1,375,000 to be divided among three organizations over the next two years specifically for programs aimed at Black trans individuals, especially Black trans women. The city department is particularly interested in proposals that will provide economic security, stabilization, and arts and cultural enrichment programmatic services to transgender and gender-nonconforming communities of color.

"A lot of trans organizations only get 1% of government contracts and large foundation-based contracts," noted Tuquan Harrison, the HRC's LGBTQI policy adviser. "This funding is meant to support them with capacity building and to expand their operations and their data support systems."

Working with the city's Office of Economic & Workforce Development, the HRC is also accepting proposals for $250,000 in funding over the next two years. It will be divided between two organizations and is meant to assist queer people of color, particularly Black trans and nonbinary entrepreneurs, who want to open their own business in San Francisco.

"Many transgender business owners need help going through the business licensing process. They don't have those supports to navigate the process," noted Harrison, 29, who is Black, queer, and nonbinary. "The hope is lesbian, gay, and bisexual folks and queer folks of color will also be able to reap the benefit of this opportunity."

The funding for the two grant opportunities came from Mayor London Breed and District 10 Supervisor Shamann Walton's efforts this summer to redirect funding from the San Francisco Police Department to the city's African American community in the 2020-2021 and 2021-2022 budgets. Harrison and his boss, HRC Executive Director Sheryl Davis, worked to ensure that a portion of the funds was targeted to the Black trans and gender-nonconforming community.

Since August, the city department has held more than 60 meetings with various Black community and other diverse stakeholders about how to best invest the funding. Harrison led the community input sessions with Black LGBTQI+ leaders, stakeholders, and community members about the specially targeted funding opportunities.

"Funding opportunities get diluted, and LGBTQ folks don't feel supported to apply even though we are," said Harrison, who lives in San Francisco. "We need to make sure LGBT folks are centered in these equity programs when we are having these conversations around funding and resource allocations to communities."

Applications are due January 8. A review panel will then review the proposals and make a recommendation on which ones it believes should be funded.

As the request for proposals for the larger grant amount stresses, "Special consideration will be given to organizations with experience working with sex workers, formerly incarcerated people, marginally housed people, and survivors of violence."

The city departments and the mayor's office will then confer on the final decision, and awardees will be notified by January 22. The programs receiving grants should begin February 1 and run through January 31, 2023.

For more information about the funding opportunity, visit http://sf-hrc.org/grant-opportunities