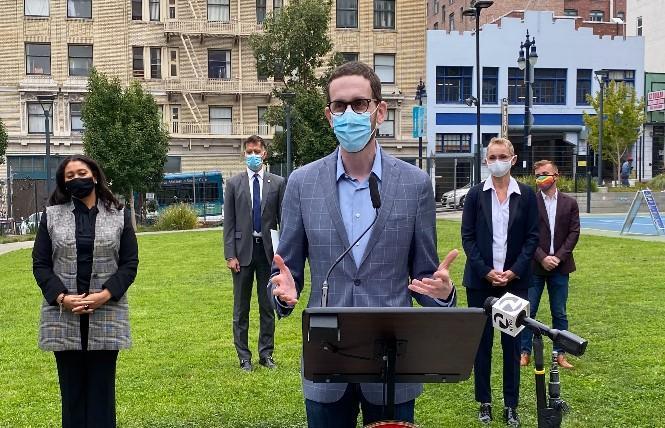 State Senator Scott Wiener, center, joined Mayor London Breed, left, and Health Director Dr. Grant Colfax, rear, at a news conference in October where he said that he would reintroduce a bill to allow for supervised injections sites in San Francisco and Oakland. Los Angeles will also be added. Photo: Liz Highleyman

State Senator Scott Wiener does not give up when he believes in an issue, and this week he proved it again.

Wiener (D-San Francisco) on December 8 formally reintroduced legislation that would allow San Francisco, Oakland, and Los Angeles to open pilot supervised injection sites, also known as overdose prevention programs. He had said in October that he would be bringing the bill back next year.

"So many communities in our state are experiencing dramatic rises in public drug use and overdose deaths, and now is the time to implement a proven anti-overdose strategy that helps get people into recovery," Wiener, a gay man, said in a press statement. "People struggling with addiction deserve access to treatment, as well as care and supplies that reduce the risk of overdose and infections."

Senate Bill 57 will remove the current state prohibition and allow local authorities to decide whether to open safe injection facilities. San Francisco officials have long expressed support for the measure.

"Overdose prevention programs save lives, reduce public drug use, prevent the spread of disease, and connect people to medical care that can help treat their addiction," said San Francisco Mayor London Breed. "With a new administration coming into the White House that actually believes in public health solutions, I'm hopeful that the work we are all doing to pilot these sites can go forward. Senator Wiener's legislation is key to this effort, and I'm proud to partner with him on this innovative solution that will make a real difference in our city."

Breed was referring to President-elect Joe Biden, who has stated he will govern by science in public health matters.

Wiener and bill co-author lesbian state Senator Susan Talamantes Eggman (D-Stockton) have made several previous attempts to enact supervised injection legislation. In 2018, a bill passed the state Senate and Assembly but was vetoed at the last minute by outgoing Governor Jerry Brown.

A narrower bill that applied only to San Francisco passed the Assembly last year, but was tabled in the Senate after Oakland officials indicated that they wanted to be included. The Assembly bill was again halted this summer due to a reduction in legislative activity due to COVID-19.

Legislators hope they will have more luck under Governor Gavin Newsom, who has expressed support for the concept, and Biden. The Trump administration has strongly opposed supervised injection sites and indicated that cities that open such facilities could expect federal repercussions.

"With a Newsom administration and Biden in the White House, I'm hopeful we can finally get this done in 2021," Wiener said. "This legislation, if it becomes law, will save many, many lives."

Preventing overdose deaths
Supervised injection facilities allow people to use drugs under the watch of trained staff, reducing the risk of overdose deaths. They provide sterile needles to prevent transmission of HIV and hepatitis B and C, and offer clients an entry point for seeking medical care and addiction treatment. Indoor sites also reduce street-based drug use and improper syringe disposal, a growing problem in the city. While there are currently no sanctioned injection sites in the United States, around 150 such facilities operate worldwide.

City officials estimate that there are around 25,000 people who inject drugs in San Francisco. Although existing harm reduction programs distribute Narcan (naloxone) to reverse opioid overdoses, the arrival of fentanyl — which is much stronger than heroin — has contributed to a steep rise in fatalities. Methamphetamine, which does not have a similar antidote, is implicated in a growing proportion of overdoses.

Overdose mortality in San Francisco rose by 70% in 2019, reaching a total of 441 deaths. Experts fear the crisis will be exacerbated by the COVID-19 pandemic. So far this year there have been more than 460 overdose deaths, according to the San Francisco chief medical examiner's office.

"While we are dealing with a global pandemic, we're facing another deadly crisis here. San Francisco has seen the opioid crisis explode out of control, with at least two overdose deaths a day," San Francisco Board of Supervisors President Norman Yee said in a statement. "These critical services will not only save lives, but help us turn the unbearable conditions on our streets around. Research demonstrates how safe injection sites increase users' access to treatment and decrease public drug use, as well as prevent the spread of infectious diseases."

The Board of Supervisors public safety committee will hold a hearing on the overdose crisis and the city's response Thursday, December 10, at 10 a.m. The virtual meeting can be accessed here.

"The war on drugs has been an expensive, wasteful, racist failure," Kaplan, a lesbian, said in a statement. "We need to adopt policies that prioritize public health and community healing."

In Los Angeles, county Supervisors Sheila Kuehl, a lesbian, and Hilda Solis wrote a letter of support for SB 57, stating that they believe Los Angeles County "is well-positioned to be one of the three jurisdictions to pilot and evaluate health programs that have proven to be effective in reducing the number and rate of fatal drug overdoses, as well as reducing overdose-related emergency room visits and hospitalizations."

Advocates expressed broad support for the legislation. The San Francisco AIDS Foundation, HealthRIGHT 360, the Drug Policy Alliance, the California Society of Addiction Medicine, and the National Harm Reduction Coalition are among the bill's co-sponsors. SFAF is expected to be one of the organizations that will play a role in operating a local pilot site.

"Authorizing supervised consumption services is more urgent than ever," said SFAF director of harm reduction policy Laura Thomas. "Hundreds more people have died of drug overdoses in San Francisco this year while we wait for this legislation to pass and get signed into law — four times as many San Franciscans have died of overdose as have died of COVID-19 this year. San Francisco wants and needs these services and the San Francisco AIDS Foundation is eager to implement them as soon as possible."