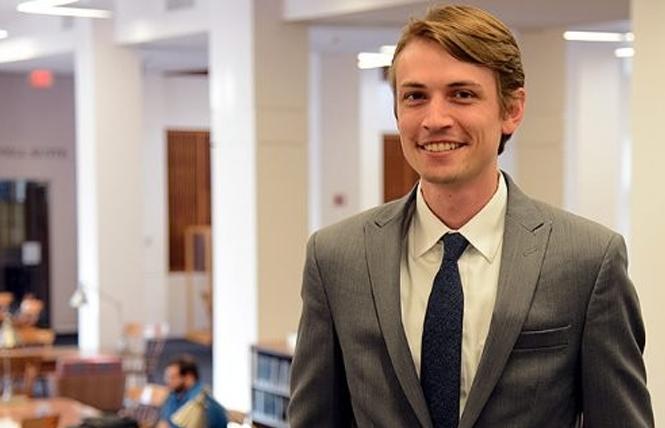 Matt Donahue started in the position last month, which is in addition to his regular caseload in the DA's office.

Boudin told the Bay Area Reporter that his office will be appointing liaisons to all the supervisorial districts in the city by early next year. District 8 is the first one to have a liaison appointed.

"Matt is just really proactive. He stepped up and is interested in community response on top of the caseload," Boudin said. "Coincidentally, he has handled a number of cases in the Castro. He met with a lot of the members of the Castro Merchants association about cases and wanted to play a big role."

Castro Merchants board President Masood Samereie wrote in a statement to the B.A.R. that the association is "very pleased to have Matt Donahue assigned as the liaison."

"As a residential neighborhood, business corridor, tourist attraction, and historical landmark, the Castro has many special needs that can only benefit from a concentrated focus by the district attorney's office, working in full cooperation with all of this important neighborhood's constituents," Samereie wrote. "In a short period, Matthew has already demonstrated his willingness to roll up his sleeves and help move the Castro forward and we look forward to working with him in the future."

In a recent interview, Donahue told the B.A.R. that he was initially envisioned as a liaison to just the Castro, but in recent weeks the role has expanded to the rest of District 8.

"Initially I was to focus on the Castro, but now it is District 8 as a whole," Donahue said, adding that the conception of his position came about as an "organic process."

Bay Area native
Donahue, 31, is a Bay Area native whose family lives in the East Bay. He taught one year in the Oakland Unified School District and three years for private schools in the Roman Catholic Diocese of Oakland before going to law school at Washington and Lee University in Lexington, Virginia.

"I was a teacher," Donahue explained. "My parents were very pro going to law school, and I was being a rebel by teaching fourth grade."

After earning his law degree, Donahue clerked for a judge at the Maryland Court of Appeals in Annapolis, which serves as the supreme court of the Old Line State.

But Donahue wanted to return to the Golden State not only to be closer to his family, but also to support the work of the San Francisco DA's office.

"I specifically wanted to work for San Francisco for multiple reasons," Donahue said, adding that he only applied to the DA's office here.

Donahue, who was hired about a year and a half ago while George Gascón was the district attorney, said he was initially assigned to the misdemeanor division, where he began to address issues in the Castro. He then joined Boudin's LGBTQ+ advisory board.

Gay District 8 Supervisor Rafael Mandelman said that "we've been getting to know him [Donahue] a little bit."

"We look forward to working with him," Mandelman told the B.A.R. "We are hopeful we will work together on addressing property crime and folks on the street who get into trouble and need help."

One of the perennial complaints during Castro Merchants meetings that have featured Boudin as a guest is a dearth of communication from the district attorney's office to crime victims. This, Donahue said, he would deal with.

"One of the things is that people who are the victims of crime feel they are shouting into the void," Donahue said. "It's important to address this."

Donahue added that the DA's office is just one part of a larger continuum, or "pie," of entities whose duty it is to address citizen concerns.

"We don't have the entire pie, we have a slice," Donahue said. "Everyone has a slice of the pie, and how do all those people come together to craft solutions in public safety? Certainly our office can be a contributor to solutions that make people safer. How can we be more responsive? That's one of my roles, for sure."

Lack of communication is a constituent concern with the office that goes back decades, DA spokesperson Alex Bastian pointed out, adding that it has improved in recent years and that the victim services office works hard.

Bastian added that the victim services office can be reached at (628) 652-4100, or at victimservices@sfgov.org. Its office hours are Monday through Friday, 9 a.m. to 4 p.m.

Donahue was recently moved from the misdemeanors unit to the domestic violence unit.

"I guess the number one thing in my role as District 8 liaison is coming up with proactive approaches," Donahue said.

Kaylah Williams, a bisexual woman who is the co-president of the Harvey Milk LGBTQ Democratic Club, said she is excited for more liaisons to be appointed.

"I can't speak on behalf of the Milk club, but as Chesa's [Boudin] former campaign manager, I'm very excited to see that," Williams said. "One reason for that is because his platform was based on radical changes to the justice system to make it more equitable and each district has its own needs, its own special needs, to be addressed. This is a great way to make sure the DA's office is hearing every person in San Francisco. It's very good."

Donahue's salary is $129,168 per year, according to the district attorney's office.