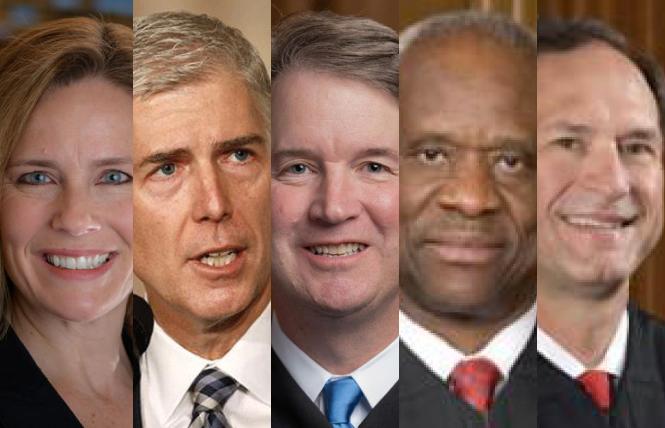 Anyone who doubted that the U.S. Supreme Court would lurch to the right with the confirmation of Justice Amy Coney Barrett got a jolt last week when it ruled that science be damned and, by God, churches can be full of congregants just waiting to be infected with COVID-19. The court's five most conservative members prioritized religion by having dealt a blow to New York state's restrictions on places of worship when they rejected Governor Andrew Cuomo's directive. Barrett cast the deciding vote.

The decision was a rebuke of states' reach of power during a pandemic and is at odds with a decision the high court made in September upholding California Governor Gavin Newsom's restrictions on places of worship. In that case, the court took no action, allowing Newsom's order to stand. The difference? Justice Ruth Bader Ginsburg was on the court. Notably, Chief Justice John Roberts sided with science in both cases, but Ginsburg's death and Barrett's appointment have significantly changed the dynamics of the court.

With the recent decision, we can expect California religious leaders to head back to court in an effort to get restrictions eased, and look for sympathetic justices to hand over the keys. Already, San Francisco Archbishop Salvatore Cordileone has indicated that he may pursue legal action because the purple tier assigned to San Francisco and San Mateo Counties restricts houses of worship to outdoor services. (The Catholic archdiocese also includes Marin County, which so far remains in the red tier, allowing for some indoor services but at reduced capacity.) Conservative religious leaders complain that government is "demoting," as Cordileone said in a statement, "worship to the same status as watching a movie: 'nonessential.' But worship is both a natural and a constitutional right."

It's also been documented numerous times over the last nine months that indoor events that exceed recommended capacity, like religious services, proved effective in infecting participants. This is due in large part to the proximity of congregants, and activities that expel air, thus allowing the airborne virus to spread. In San Diego, South Bay United Pentecostal Churches, which was on the losing end of the aforementioned Supreme Court case that included Justice Ginsburg, wants the high court to hear its case, which is pending in a federal appeals court.

This blow to science and public health bodes poorly for future Supreme Court action in cases involving religion. Fulton v. City of Philadelphia, which the justices heard last month, is about whether taxpayer-funded foster care agencies can discriminate based on their religious beliefs. As Family Equality, a national LGBTQ organization, noted in a post on its website, "Depending on how the court rules in Fulton, this case could have far-reaching implications for LGBTQ+ people, religious minorities, and children in the child welfare system." A loss, meaning a decision favorable to Catholic Social Services, would be a tremendous setback for the LGBTQ community because of its potentially far-reaching consequences; and yet, it looks like that might happen unless there's a very narrow ruling. That's because CSS, whose city contract was not renewed, hasn't specifically discriminated against any LGBTQ person or same-sex couple. The city yanked the contract because CSS did not comply with its non-discrimination ordinance, not because it actually engaged in discrimination.

One can see where this is headed: the new Supreme Court now has five solid conservative (with Roberts often providing the sixth) votes and is likely to rule in favor of religion in cases in which the religious views of individuals and institutions conflict with other issues or rights. This religious liberty argument for supremacy will be made in a variety of court cases that will seek to allow discrimination of LGBTQ people under cover of religion — and will force us to defend rights that we thought were won and assured.