Out in the World: The Netherlands to offer reparations to transgender people 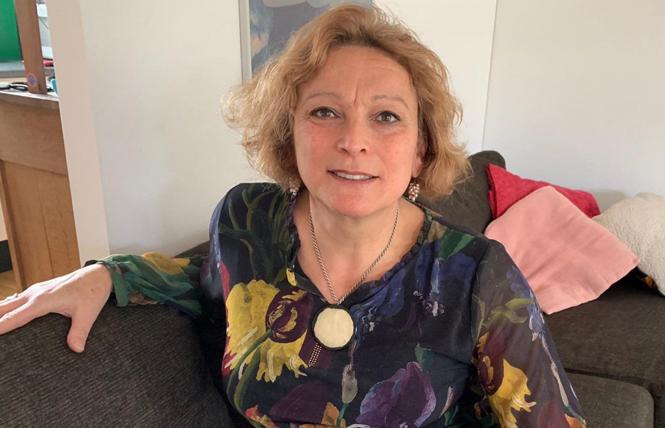 Dutch transgender activist Willemijn van Kempen won an apology and reparations from The Netherlands for herself and an estimated 2,000 transgender Dutch people after an agreement was reached November 30. Photo: Courtesy RTL Nieuws

The Dutch government has apologized and offered reparations to transgender people who suffered under The Netherlands' Transgender Act.

In a November 30 letter from the Dutch cabinet to the lower house, Ministers Sander Dekker and Ingrid van Engelshoven delivered the apology to the country's transgender community.

"The old law could give transgender people a hard, almost impossible choice," wrote Dekker and Van Engelshoven, the ministers of legal protection and emancipation, respectively, stating that the law "symbolized social rejection," reported NU.nl. "We can no longer imagine such a violation of physical integrity today."

The cabinet recognized the "suffering caused by the conditions set in the Transgender Act," the women expressed on the government's behalf.

The Netherlands' Transgender Act was enforced from 1985 to 2014 under article 28 of the Dutch Civil Code.

Under the act, transgender individuals who wanted gender confirmation surgery and to change their birth certificate were forced to undergo irreversible sterilization.

The law remained on the books unchanged for nearly 30 years.

The announcement comes less than a week after Finnish Prime Minister Sanna Marin, the daughter of two mothers, stated that her administration's Equality Program plans to revise the country's transgender law, along with other social injustices.

The Czech Republic, Bulgaria, and Finland are among the European Union countries that still impose similar laws requiring transgender individuals to become sterilized, divorce if married, and provide a medical recommendation when getting gender confirmation surgery.

Sweden became the first country to strike down its transgender law in 2013. It will provide a $26,000 reparation to an estimated 800 transgender Swedes affected by the law.

Dutch officials proposed nearly $6,000 (5,000 euros) reparation each for the estimated 2,000 individuals affected by the law.

"All of us were happy today," Anniek de Ruijter, director of the Bureau Clara Wichmann, a Dutch women's legal advocacy organization, told the Bay Area Reporter. "We got something done."

The organization was one of the legal groups that worked to push the Dutch government for an apology and reparations for the country's transgender community.

"It still has to sink in," Willemijn van Kempen, the initiator of the complaint, wrote to the B.A.R. in an email interview.

She is still processing the victory after years of fighting for an apology and compensation.

Van Kempen noted that that the amount is not finalized yet. "Nothing can undo what happened. It is hard to relate a compensation in money to what we lost and went through," she stated.

The Dutch government will work out details of the benefits for transgender people affected by the law through next summer, reported NU.nl.

Van Kempen still hopes The Netherlands will be on par with Sweden's reparations to its transgender community.

De Ruijter said she hoped the payments would be higher.

"I expected a little bit more to be honest, but that doesn't diminish the importance for those people who have sought justice in this case," the 38-year-old ally said. She was quick to place the emphasis on the "symbolic value" of the moment.

"It is important to have been found right. It's very important that apologies are made, the damages are paid," she said.

De Ruijter hopes the case, which was settled through negotiation with Dutch government officials behind the scenes avoiding a trial, will set a precedent.

"The significance is that there is some recognition here in The Netherlands," said De Ruijter. "That can, hopefully, serve as an example for other places, especially, for places where it is still being done today."

Van Kempen, who also goes by her artivist name Willemijn da Campo, hopes that "all people oppressed by gender normativity and other power structures, among whom trans persons, may rise to equality and inclusion, nothing more," she wrote.

"It may still take a bit," she added.

In 2014, Dutch lawmakers removed the sterilization requirement from the Transgender Act. However, the law still required medical approval.

The law was changed, but the pain from being forced into sterilization haunted Van Kempen, a bisexual woman.

She could not reconcile losing her fertility and the denial of self-determination in order to become the woman she knew she was within. She knew she was not alone.

Just as damaging were the many transgender people forced to continue to live in the bodies they were born in due to the law, she told to the NL Times.

Before the 2014 amendment to the Transgender Act, an average of 83 people went through with reassignment surgery and updating their legal identification documents annually, Van Kempen told the Times. The number increased dramatically — up to 770 people transitioning — the year the law was amended. Since then, the annual transition rate has remained steady at around 540.

An impossible choice
Van Kempen tried to negotiate with her gender reassignment medical team to retain some of her sperm and genetic material when she began to consider transitioning in 1992.

Her questioning the law, in an effort to be able to eventually have biological children, nearly caused the medical team to reject her candidacy for surgery, she wrote in a post on Transvesie's Facebook page last year.

"I had to choose transition or fertility," she wrote in the post.

After years debating marriage and children versus gender reassignment surgery, Van Kempen transitioned in 1996 when she was 37.

Van Kempen's desire to have children did not wane.

She and her partner of 20 years "surrounded ourselves with children from friends and family," she wrote to the B.A.R. "I loved to give them space, do theater, stories, creating things, looking after them, and car[ing] for them.

"It was joyful and painful alike," she wrote, explaining her partner and she considered fostering and adoption, but it did not happen.

Van Kempen, who is a physical therapist and sculptor in Maastricht, a rural town at the southern tail of The Netherlands, mourned for a decade, she wrote about her attempts to try to move on.

The women eventually broke up, she wrote. She is now in a new relationship with another woman.

She fought for change in the law that happened in 2014.

Push for reparations
Van Kempen kept fighting, inspired by transgender wins in Sweden and intersex Australians' campaigns for apologies and reparations, she wrote.

The same year, Van Kempen and 15 other transgender activists filed a lawsuit against The Netherlands, claiming the country was violating the European Convention on Human Rights' article 3, which prohibits torture and inhumane punishment, and article 8, which grants respect to private and family life.

The Dutch government began to unravel the law late last year after the threat of the lawsuit and many years of transgender activists challenging it.

"That was the key in this situation," said De Ruijter. "To have people come out and explain how this has affected their lives."

In July, Dutch officials announced that The Netherlands was doing away with gender markers on government-issued identification documents within the next five years, reported Human Rights Watch.

The churches demanded to join the case as "interested parties" because the case is of "great public interest particularly to the Christian community," pastor Randy Rodney stated in a November 17 affidavit to join the case at the Commonwealth of Dominica's High Court of Justice.

Roman Catholic Bishop Gabriel Malzaire also submitted an affidavit to join the association in the case.

Rodney, who is the president of the Dominica Association of Evangelical Churches, stated in the affidavit that the lawsuit could "impair or impede [Christians'] moral rights."

The DAEC affidavit forced Justice Birnie Stephenson to recuse herself from the case November 23 and to hand it over to the chief justice or appoint another judge.

Rodney is also the pastor at Parish of St. George in Dominica and provided Stephenson with the affidavit. He is her pastor.

The case was filed against the government in July 2019 by a gay man only identified as D.G. challenging the country's anti-sodomy laws.

It was the second delay caused by religious factions, the first took place in September.

A new court date has not been scheduled.

D.G., who has been assaulted, threatened, and harassed for being gay, is being represented by Tomlinson's Canadian HIV/AIDS Legal Network.

The network is working with the University of Toronto's International Human Rights Program; Minority Rights Dominica, an LGBT organization; and Lawyers Without Borders on the case.

Tomlinson called the churches' reasons for entering the case "laughable," and told 76 Crimes it was another "coordinated delay tactic."

He has seen that played out with ongoing challenges to anti-sodomy laws in Belize, Jamaica, St. Vincent and the Grenadines, and Trinidad and Tobago.

Human rights cases that are supposed to be prioritized and expedited by courts, Tomlinson said.