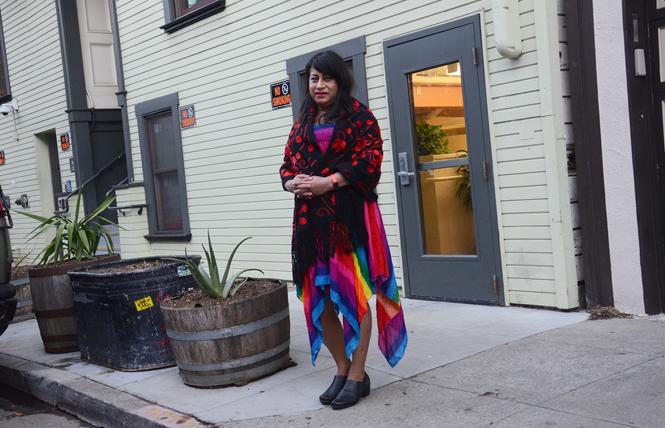 Over the summer Adriana Kin Romero received notice that her monthly rent would be reduced from 50% to 30% of her income. It was a welcome financial respite for the resident at Casa Quezada, a 52-unit supportive housing site for formerly homeless individuals in San Francisco's Mission district.

Due to the COVID-19 pandemic, Romero could no longer take part in an internship that was paying her $200 a month. She had been paying $75 a month in rent, which went down to $25.

"I am paying less rent now, which is really good especially with the COVID. It really helps," said Romero, 50, a transgender woman. "Me and all my neighbors worried about the rent."

In the spring she and her neighbors contracted the coronavirus, and while Romero ended up having a mild case, she was concerned at first due to being a diabetic.

"I was afraid I wasn't going to make it. Gladly, I did survive," said Romero.

Her rent reduction was due to District 6 Supervisor Matt Haney securing a $1 million budget allocation that reduced the rent for more than 500 tenants of supportive housing units in the city who now pay 30% of their income instead of 50%. Haney is now seeking to permanently provide the same rent reduction to 3,000 residents of such units in San Francisco.

It will cost the city roughly $8 million a year, which Haney argues is a worthy investment to help keep the tenants housed and lessen the likelihood they will end up back on the streets because they can't afford their rent. Most are living off of $1,000 or less a month, so paying $500 each month in rent leaves them very little leftover to pay for food, health care, and other necessities.

Already, the city mandates that new tenants in supportive housing units only pay 30% of their monthly income in rent. It is a standard that federal affordable housing programs have also adopted.

"It is an issue of basic fairness and equity," Haney told the Bay Area Reporter. "Right now some tenants live in units that arbitrarily have high rent burdens. There is no reason for that, particularly because we have set a standard moving forward for all new buildings of 30% to be the max. We need to bring everyone else to that standard."

The Board of Supervisors' budget and finance committee will hear Haney's legislation at 2:30 p.m. Wednesday, December 9. Six supervisors are co-sponsors, meaning Haney already has the votes needed to ensure its passage by the full board.

"It is the right thing to do, and I hope my colleagues will agree," said Haney, who represents the Tenderloin neighborhood where many supportive housing buildings are located. "These are some of the poorest people in our city."

Gay District 8 Supervisor Rafael Mandelman, who sits on the budget committee, is not listed among the legislation's co-sponsors. He told the B.A.R. he hasn't had a chance to fully review and evaluate it yet.

Jackie Fielder, a queer educator who made affordable housing a centerpiece of her state Senate campaign this year, also told the B.A.R. that she needs to do more research into Haney's legislation but agrees with the premise.

"I don't think anyone should be paying above 30% of their income for rent," she said.

New coalition forms
A number of LGBTQ leaders are supporting Haney's legislation and are a part of the #30RightNow Coalition. One of the organizing conveners is Jordan Davis, a transgender resident of a single-room occupancy unit who went on a hunger strike to bring attention to the issue.

"While we support all tenants who are living in SROs, thousands of people of color (especially Black), immigrants, families, seniors, veterans, and disabled people have been struggling for years to pay exorbitant rents for such small & sometimes toxic spaces," noted the coalition in a post on Medium. "Many are getting by on a meager SSI, Social Security, or G.A. check; and, now with COVID-19, we are trying to shelter in place and stay safe while sharing bathrooms and common spaces."

The AIDS Legal Referral Panel is among the signatories on the post, as is Community United Against Violence. The Harvey Milk LGBTQ Democratic Club voted last month to support Haney's legislation.

Two lead backers of the rent reduction proposal are Delivering Innovation in Supportive Housing, or DISH, which provides 570 units of supportive housing in the city, and the Supportive Housing Providers Network. Both are co-lead by Doug Gary, a gay married father, who described the projected $8 million cost to enact the policy as a "rounding error" in the city's budget.

"I am hopeful because, again, the thing that is hard to ignore is we are spending this money in one silo or another," Gary told the B.A.R. about seeing it be adopted. "If I am a tenant paying too much rent and make choices that make it hard to pay my rent and get evicted, if I am on the street and end up in the ER at San Francisco General, the city will end up spending way more money to care for that individual than on their rent."

The $1 million budget allocation that Haney secured has been a "huge game change," Gary said, for tenants of DISH's SRO buildings who had been paying anywhere from $400 to $600 a month in rent.

"In the end we all know, whether talking about racial justice or justice for our LGBTQ community, I don't mean to be hokey but there is no justice without economic justice," he said. "The economics just don't make sense for the city to invest a lot of money in people's well being so they can get back on their feet and out of the trauma of homelessness, and if we make these people pay too much in rent we risk they end up back in homelessness."

Enacting Haney's legislation is a way for City Hall to ensure people are paying a reasonable amount in rent to be safely housed, argued Gary.

"It is really thanks to tenants living in this housing paying too much for too long standing up for themselves and getting City Hall's attention that it is even being talked about," said Gary. "It is an opportunity to make a difference for our neighbors and to make sure our neighbors don't become a neighbor without a home."

Updated, 12/7/20: This article has been updated to reflect a new meeting time on December 9.