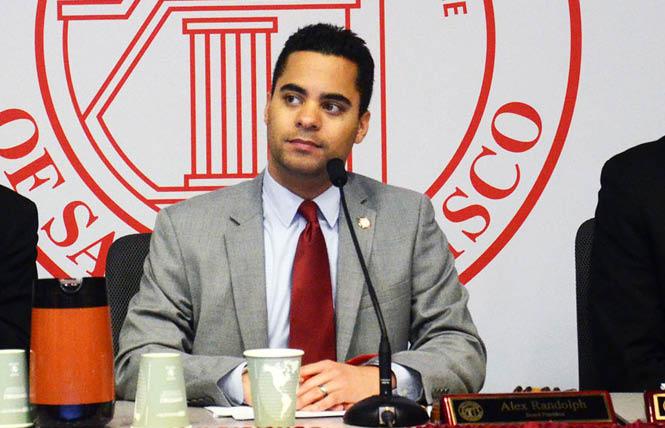 As the number of out LGBTQ people winning elective office continues to grow around the Bay Area, San Francisco is seeing a decline. With no non-incumbents winning any of the races on the November 3 ballot, the city's class of LGBTQ elected officials will drop by one come 2021.

Gay City College of San Francisco Trustee Alex Randolph opted not to seek reelection this month, lowering the number of out officeholders in the city next year to eight. His departure will also mean the city will have only one Black out elected leader, bisexual college board president Shanell Williams, who easily won reelection this month as the top vote-getter in the race for four college board seats.

The loss of queer representation in a city long a trendsetter on LGBTQ issues "is a concern," said Randolph, who told the Bay Area Reporter he has no immediate plans to seek a different political office.

At the same time, he said it is encouraging to see more young LGBTQ people winning election outside of San Francisco, whether it be on a city council in a small city like Pinole or in a more suburban state Assembly district that includes parts of Alameda County.

"I think what people have noticed and what people know is it's not easy to run for office in San Francisco. It is very cliquish and you need to have a lot of resources and support," said Randolph, who works for the ride-sharing company Uber. "It is easier now to be openly gay and run for office in smaller cities around the bay; that is an exciting trend."

Michael Nguyen, a patent attorney who chairs GAPA, a social group for LGBTQ Asian and Pacific Islanders that also has its own political action committee and endorses candidates, told the B.A.R. the inability to grow the number of out officeholders in San Francisco is worrisome.

"We are definitely interested in trying to inspire more people to run for office, especially within the queer and transgender API community," said Nguyen, who as his drag persona Juicy Liu helped with get-out-the-vote efforts this fall. "I think part of that is building our community and making sure people understand it is possible to do that."

He has gone through training for out candidates and this fall took on his first paid campaign position, serving as a field organizing director for Temprano. As for running for office himself one day, Nguyen has not ruled it out.

"I am keeping my ear down to the ground to see where I can best serve our community," he said.

"It does make me a bit bummed to see that there is that decline from queer elected officials and also Black elected officials," said Kaylah Williams, who told the B.A.R. if the right elective office presented itself she would consider running for it. "For me, it says there is a lot of ground game and internal organizing we need to start working on. In 2021, there are no set elections scheduled, so it is a big opportunity for us to really take a look inwards."

A queer political chessboard
Should Mayor London Breed decide to step down for a presidential appointment with the Biden administration, District 6 Supervisor Matt Haney has made it clear he wants to serve in Room 200 at City Hall. Were that to happen, a top candidate to succeed him on the board would be Honey Mahogany, a Black queer nonbinary trans person who is his top legislative aide.

And in two years' time there is potential to see San Francisco's class of out electeds grow. Three seats on both the community college and school boards will be up for grabs on the November 2022 ballot, as will the even-numbered supervisor districts. Plus any number of LGBTQ leaders could seek to succeed House Speaker Nancy Pelosi (D-San Francisco) should the Democrat decide her next term will be her last.

Mandelman will be seeking reelection to his seat that fall. With queer educator Jackie Fielder, who ran a strong campaign against Wiener this year, moving into District 8, it has led to speculation she could mount a challenge against Mandelman. But Fielder implied in a recent interview with the San Francisco Examiner that her living arrangement is only temporary.

And it is unclear if her positions on defunding the police and homeless policies would be a winning fit in the district that covers the Castro and Noe Valley, where residents and merchants have harangued Mandelman over sidewalk tent encampments and a lack of police presence. Fielder told the B.A.R. this week that she hadn't contemplated such a run and was surprised to see such speculation in print.

"Right now, I am focused on thanking my supporters and redirecting our base to advocating for our unhoused," said Fielder, who received close to 191,000 votes in her Senate bid. "That is nothing I could have ever imagined. With that anywhere else in the country we could have secured even a congressional seat doesn't see that many votes. It speaks to the size of this district and the policies we advocated for, like expanded tenant protections and more public funding for schools.

"There is still so much to be done," added Fielder. "Just because we didn't win this time around doesn't mean those issues have disappeared."

Mandelman told the B.A.R. he would see her as "a serious opponent" should she enter the race.

"If she does, she would be a formidable challenger," said Mandelman, who lost his first race for the D8 seat to then be elected to the college board before running again for supervisor. "She gets to decide what her plans are; I don't get to decide what they are for her."

He discounted the notion no woman could win the D8 seat, though none have since the supervisors reverted to being elected by district in 2000 rather than citywide.

"People say it, I don't believe it. She captured a lot of people's imaginations. She did better than one would have expected for someone who has never run for office before," said Mandelman. "I do think the job of a supervisor is very different from a state senator. District 8 has a history of electing people deeply engaged within the community and the neighborhoods for some time."

Rather than seeing two strong queer candidates pitted against each other again in two years, Fielder could opt to wait until 2024 when District 9 Supervisor Hillary Ronen is termed out of office. The district based in the Mission favors more progressive supervisors, seemingly providing a better fit for Fielder, a democratic socialist endorsed this year by a wide array of progressive groups and leaders.

"I do think she would be a formidable candidate in D9," said Dufty, who formerly served in the D8 seat on the board and told the B.A.R. he "would strongly support" Mandelman for reelection.

Kaylah Williams expressed doubt about seeing Fielder run in District 8 but had no question that she would run again for some political office.

"I do get frustrated when I see the idea of pitting queer folks against each other," she said. "Jackie is a really smart candidate. I feel good knowing wherever Jackie Fielder goes on to next, she is going to be absolutely fantastic. She is smart and strategic about the steps she takes."

Should she end up moving closer to San Francisco State where she has taught, Fielder could opt to run for Assemblyman Phil Ting's seat, as the Democrat is already raising money for a likely bid to become state controller in 2022 when Betty Yee is termed out.

"That is not in my lane right now," Fielder told the B.A.R., adding that she also has "no idea" on if she would move to D9 to seek that supervisor seat. "I made the decision to run for state senator exactly a year ago, so much can happen in a year. Even looking in the future four years from now is a bit overwhelmingly. Right now I want to try to return to my roots as an organizer." 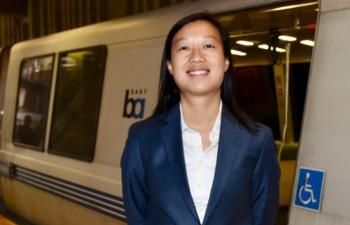 Also being encouraged to seek Ting's 19th District seat is Li, whose first term in the BART board's District 8 seat will be up that year. She told the B.A.R. this month it is "way too early" to think about her future political plans.

But she did point out that come next year, there will be no women representing San Francisco, San Mateo, or Santa Clara counties in the state Legislature. There will only be a single female Asian state legislator who is a Republican, added Li, and just three queer Democratic women in the Legislative LGBTQ Caucus.

"You would think in California we would be breaking ground and getting more LGBTQ women elected but that is not the case," said Li. "We need to do better in building a pipeline."

Randolph agreed, telling the B.A.R. that without "a pipeline of amazing LGBTQ folks, we are going to continue to see a lack of LGBTQ representation, whether on the Board of Supervisors or the City College board of trustees and beyond."

At no point in the foreseeable future does Dufty envision there not being an LGBTQ supervisor in the city. And despite the inability of out candidates in recent election cycles to win a supervisor seat outside of District 8, Dufty said it is only a matter of time.

"I think a solid grassroots queer candidate can win in other districts," he said. "I just don't think that they have lined up when the opportunities have arisen. I do think San Franciscans will support queer candidates in every district."

Mandelman also believes queer supervisorial candidates can win in other districts and would like to see a trans and out person of color serving on the board. He does question how important it is within the LGBTQ community to see more than just one out supervisor at City Hall.

"But I don't think the community, at least we haven't seen the kind of community demands for more representation," he said. "So if it is only queer electeds and queer media raising this, and if it is not salient for the broader queer community, I am not sure other people are going to listen."

Gay West Sacto mayor is defeated
In a shock to the LGBTQ community in the Sacramento region, gay West Sacramento Mayor Christopher Cabaldon has been ousted from office. Voters in the rapidly developing riverside city elected West Sacramento City Councilwoman Martha Guerrero to be their new mayor just two years after she won her council seat.

According to the last count update posted Friday, November 20, by Yolo County elections officials, Guerrero edged out Cabaldon by just 486 votes to deny him a ninth consecutive two-year term as mayor. In 1996 he first won a seat on the City Council, having fallen short during his first bid two years prior, and served four yearlong terms as mayor while a council member.

In 2004, Cabaldon was the first mayor to be directly elected by West Sacramento voters. He came out as gay during his State of the City address the following year.

His defeat means the capital area will be seeing two of its highest profile out elected municipal officials leaving office at the end of this year. In the March primary, gay Sacramento City Councilman Steve Hansen lost his bid for a third term in another close race to political newcomer Katie Valenzuela, an environmental policy adviser.

Web Extra: For more queer political news, be sure to check http://www.ebar.com Monday mornings for Political Notes, the notebook's online companion. This week's column reported on the upcoming virtual swearing-ins for local LGBTQ winners of the November 3 election.