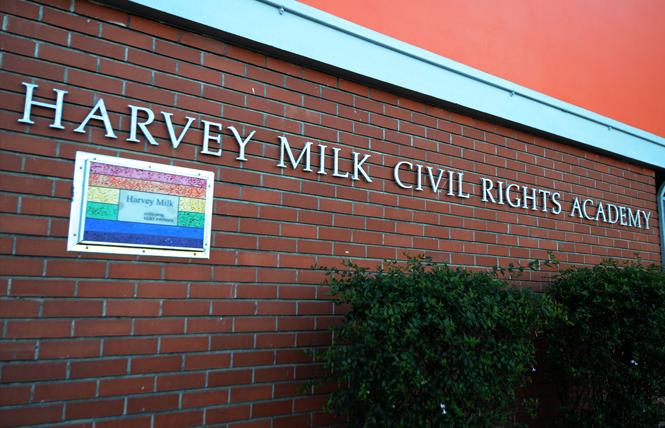 Harvey Milk Civil Rights Academy in the Castro is the only public school in San Francisco named after an LGBTQ person. Photo: Rick Gerharter

San Francisco, considered one of the world's leading cities when it comes to LGBTQ issues, has named only one of its 125 public schools after an LGBTQ person. Twenty-four years ago, after a protracted fight to do so, the school board christened an elementary school in the heart of the LGBTQ Castro district the Harvey Milk Civil Rights Academy.

The honor came 19 years after Milk became the first out gay person to win political office in both the city and state of California with his election to the Board of Supervisors. Tragically, Milk and then-mayor George Moscone, who also has an elementary school named after him, were murdered inside City Hall 42 years ago this Friday, November 27.

A proposal was floated in 2014 to name another Castro district public school, McKinley Elementary School, after gay former educator Tom Ammiano who was termed out of the state Assembly that year. One of the first public school teachers to come out publicly in the Golden State, Ammiano served on the city's school board in the early 1990s prior to becoming an elected city supervisor in 1994.

But nothing came out of the effort to honor Ammiano, who had been instrumental in getting the public school named after Milk. Now, six years later, the McKinley school is one of 42 schools operated by the San Francisco Unified School District that an advisory committee has targeted to be renamed because of the person's problematic past. Some honor past political leaders who were slave owners or persecuted Native Americans.

The release of the list last month caused controversy and sparked headlines across the country, particularly since one of the targeted facilities is an elementary school named after Senator Dianne Feinstein (D-California). The renaming committee said it included the school because when Feinstein served as the city's mayor following the assassinations of Milk and Moscone she replaced a vandalized Confederate flag that had flown outside City Hall.

Press coverage made it seem that the jettisoning of the targeted school names was a foregone conclusion, but the school district issued a statement stressing that no decisions had been made and none would be until next year at the earliest. Public outrage was also enflamed by school principals being asked to submit new name suggestions to the naming advisory group while their school sites were closed because of the COVID-19 pandemic.

Gay school board president Mark Sanchez, a former principal with the district, two years ago had passed the resolution calling for the School Names Advisory Committee to be formed. In an interview in August with the Bay Area Reporter, he had noted that the group had fallen a year behind its expected timeline for presenting new name suggestions.

At the time expecting to see the committee wrap up its work by December, Sanchez declined to weigh in on any potential names. The panel now plans to next meet Wednesday, January 6.

"I want them to do their work without influence," Sanchez had said.

Martin Rawlings-Fein, a transgender bisexual married father who had sought a seat on the school board two years ago, told the B.A.R. the renaming panel was facing an "uphill battle" before its work caught the attention of the mainstream press.

"We have this view of what our school communities are like and they are attached to names," said Rawlings-Fein, who has an elementary student and a high school student enrolled in city public schools. "It can be really hard to break through with those alumni boards and break through with those people who really have a stake in what they think the name means and what it means in reality."

In addition to potentially naming a school after Ammiano, another LGBTQ leader who would be appropriate to honor in such a way would be the late lesbian city ethics commissioner Eileen Hansen, said Rawlings-Fein. Hansen, who died in 2016 two days shy of her 65th birthday from cancer, also worked for a number of AIDS agencies.

Ideas for names
The B.A.R. asked readers in late August to suggest possible new school names, and the suggestions of LGBTQ people to recognize in such a manner varied widely. Several people argued on behalf of the late lesbian pioneering couple Del Martin and Phyllis Lyon, whose Noe Valley home the city is now looking to designate as a city landmark.

With that marriage later annulled by the courts, the women were the first same-sex couple to legally marry in California on June 16, 2008. Weeks later, on August 27, Martin died at the age of 87 in San Francisco with Lyon at her side. This past spring Lyon died at the age of 95 on April 9.

Martin, in particular, would be a worthy person to name a school after, pointed out Kathy Amendola, a lesbian who owns the Cruisin' The Castro Walking Tours.

"Del started the first lesbian organization, the Daughters of Bilitis in 1955. The group's goal was education thru advocating and were responsible for the American Psychiatric Association to remove homosexuality as a mental illness," wrote Amendola. "Del Martin and Phyllis Lyon were also the first LGBTQ couple to be married in SF after 50 years of partnership."

Local leatherman Patrick Mulcahey advocated on behalf of the late Martin Delaney, "a giant of AIDS activism" as the B.A.R. noted in its news obit for the founder of the San Francisco-based HIV treatment information organization Project Inform. Delaney, who changed how clinical trials are conducted and how patients interact with physicians, died of liver cancer in 2009 at the age of 63.

Others on the list included the B.A.R.'s late founding publisher Bob Ross and Milk's gay successor on the Board of Supervisors Harry Britt, who died in June at the age of 82. Another of Milk's compatriots mentioned by former B.A.R. assistant editor Dennis Conkin was Sally Gearhart. She worked with Milk on the 1978 defeat of Proposition 6, a California ballot initiative that sought to exclude gay men and lesbians from teaching in public schools.

Now living in Northern California, Gearhart was the first out lesbian to receive a tenure-track position at San Francisco State University in 1973. She also established one of the first women's and gender studies programs in the country while at SF State.

Transgender housing activist Jordan Davis advocated for a school to be named after the late transgender leader Jazzie Collins, "for all her work with issues facing Black transgender women, disabled folks, and housing rights."

According to a statement issued in late October by Sanchez, who was reelected to the school board this month, the naming advisory panel will factor in feedback from the public and the individual school sites when it meets in early 2021 to formulate its recommendations and deliver them to the school board in January or February for further action.

"Any final decision to change school names rests with the elected members of the Board of Education," stressed Sanchez.