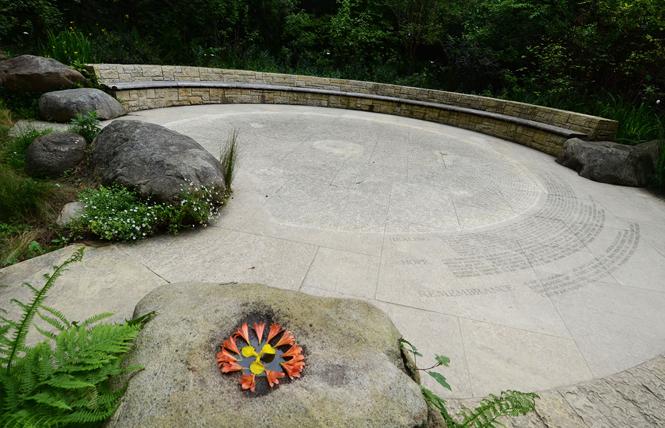 The Circle of Friends in the National AIDS Memorial Grove in Golden Gate Park; this year's AIDS grove program for World AIDS Day will be held online. Photo: Rick Gerharter

Events commemorating World AIDS Day have largely been moved into virtual space due to the other health crisis, COVID-19, that has dominated headlines and lives this year.

The day, founded in 1988 by the World Health Organization and UNAIDS, is meant to unite people in the fight against HIV, show support for people living with HIV, and remember those who have died from the disease. It was the first-ever global health day, according to http://www.WorldAIDSDay.org 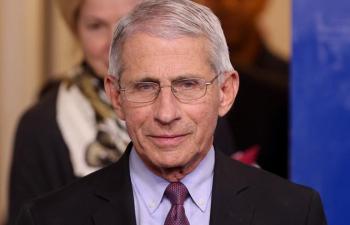 Fauci became a household name this year due to his role on the White House Coronavirus Task Force, but many in the LGBTQ community already knew of Fauci from his time as a leading researcher of HIV.

Larry Kramer, the playwright and AIDS activist who founded ACT UP and who died earlier this year, initially sparred with Fauci in public but grew to call him "the only true and great hero" in the government's response to AIDS.

The conversation will also feature Dr. David Ho, the director of the Aaron Diamond AIDS Research Center at Columbia University. The AIDS grove will be giving Fauci and Ho its National Leadership Recognition Award during the event.

"World AIDS Day is a national conversation, more of a national forum, during this year, with Dr. Fauci as our keynote speaker," Kevin Herglotz, a spokesman for the AIDS grove, told the Bay Area Reporter. "It's been 40 years since the first cases were reported, and we're tying it in with COVID and its effects on marginalized communities and activism."

Herglotz said that Light in the Grove, the nonprofit's annual fundraiser at the grove in Golden Gate Park, will not happen this year.

Four big-city mayors — straight ally Keisha Lance Bottoms of Atlanta; lesbian Lori E. Lightfoot of Chicago; Robert Garcia of Long Beach, who is gay; and straight ally Bill de Blasio of New York City — will lead a panel on the interconnected COVID-19 pandemic and HIV epidemic, according to a November 20 news release from the AIDS grove.

Another event, Herglotz said, will feature Alicia Garza, a queer woman who is a co-founder of the Black Lives Matter Global Network; Cleve Jones, a gay man who is co-founder of the AIDS Memorial Quilt; and Kristin Urquiza, a bisexual woman who co-founded Marked by COVID, the latter two of whom spearheaded a week of mourning for COVID victims earlier this year, as the B.A.R. previously reported.

At 11 a.m. Pacific Time December 1, the federal Office of Infectious Disease and HIV/AIDS Policy will be hosting "Live with Leadership — World AIDS Day Edition," which will be available on the office's website.

The event will be moderated by Harold Phillips, the chief operating officer for Ending the HIV Epidemic: A Plan for America, and senior HIV adviser for the office.

Ending the HIV Epidemic is a Trump administration initiative aimed at reducing new infections by 75% by 2025 and by 90% by 2030.

Virtual quilt display
The AIDS grove, which took over stewardship of the AIDS quilt a year ago, (https://www.ebar.com/news/latest_news//284604) will be unveiling a virtual exhibition of the quilt on World AIDS Day. The online exhibit will will run until March 31. The exhibition will feature about one-fifth of the total quilt panels, according to a news release from the AIDS grove.

"Our hope is to use the power and beauty of the quilt to help our nation heal during these difficult times," AIDS quilt co-founder Mike Smith stated in a news release. "This first-ever virtual display will help us bring the quilt to so many people in a year when we can't do in-person displays."

Herglotz said he hopes those who can't see physical quilt panels in person due to the pandemic can visit online.

Chad Ngo, communications manager for the San Francisco AIDS Foundation, told the B.A.R. that the foundation is "promoting the National AIDS Memorial's virtual quilt display because we want to lift up the work they are doing as the new stewards of the quilt."

The foundation, too, is avoiding in-person events.

"We're hosting the ACTivate Fundraising Lunch, and the TogetherRide team is hosting an evening event — the latter event will include a candlelight vigil," Ngo stated in an email. "SFAF is working with a community artist to create a unique design to be added to our online store. The design will represent diversity, equity, and inclusion, and carry the message of health justice on World AIDS Day."

Items will be available for purchase at http://www.sfaf.org/shop

"First, our December issue of our monthly newsletter, which will go out on November 30, will feature two AIDS-related stories, one of which is about the dozens of interviews with former ACT UP San Francisco members we've completed as part of our AIDS Oral History Project," Sawchuck stated in an email. "Second, we're going to be hosting a live rebroadcast of five of our virtual programs from earlier this year from our series 'Lessons from AIDS for COVID-19.'"

These programs will run from noon to 8 p.m. December 1 on the society's website and are titled, consecutively: "Confronting the Stigma of Disease;" "Housing Insecurity & Public Health;" "The International AIDS Conference in San Francisco, 1990-2020;" "Direct Action, Marching & Parading;" and "Pandemic Sex."

Around the bay
East Bay Getting to Zero is planning a virtual event for December 4, program manager Yamini Oseguera-Bhatnagar told the B.A.R., though details are forthcoming.

In Oakland, a soft opening of a new wellness clinic has been timed to occur the day after World AIDS Day, December 2, from noon to 6 p.m.

"The new Glenn Burke Wellness Clinic is a project of the Oakland LGBTQ Community Center," a news release states.

It is located at the Oakland center, located at 3207 Lakeshore Avenue.

The clinic is named for Burke, the first player in Major League Baseball to come out as gay to his teammates during his professional career, and the first to publicly acknowledge it after he left the sport.

Burke, who went to Berkeley High School, played for the Los Angeles Dodgers from 1976 to 1978, and then played one season for the Oakland Athletics. He is credited with helping to invent the high-five along with Dodgers teammate (and former San Francisco Giants manager) Dusty Baker. Burke died of AIDS complications in 1995.

"Although people are much more accepting today than during the time that Glenn lived in, still Black gay, bi, transgender, and queer individuals struggle with some of the same challenges that Glenn Burke tried overcoming 40 years ago, with few places to turn for support until now," the release states.

Meanwhile in the South Bay, the Billy DeFrank LGBTQ+ Community Center will be holding a virtual panel viewable on YouTube and Facebook Sunday, November 29, at noon featuring Shoma Sen, Robert Robledo, and Molly Herzig as panelists and Gabrielle Antolovich as the moderator. 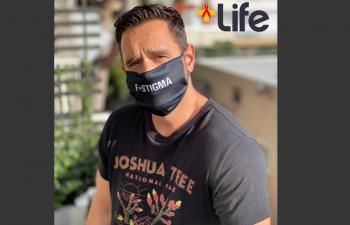 Using masks to fight stigma
Meanwhile, Karl Schmid, a gay man who is a reporter for KABC-TV in Los Angeles, is using World AIDS Day as an opportunity to launch a new campaign against HIV stigma.

Schmid has co-founded +Life, which will be starting the F+Stigma campaign December 1. The idea is to have people wear face masks to prevent COVID-19 transmission that bear the message "F+Stigma" (short for "fight stigma"). Face masks are being distributed to "influencers, some press and thought leaders," according to spokesman Raúl Rojas.

"I've been on this mission for the last two years to tackle HIV stigma head-on. HIV doesn't kill like it used to, but stigma does," Schmid told the B.A.R. "We created this campaign to say 'F+Stigma' to put it out there as a conversation starter."

Schmid said when he wore a U=U shirt to the gym before they were closed by the COVID-19 pandemic, he was able to tell people who hadn't heard about it that those whose HIV infection is undetectable are unable to infect others with the virus. The B.A.R. reported on that campaign last year.

"I cannot tell you the number of times people stop. Once I was buying flowers in Australia and I had a chat with a woman for 10 minutes," Schmid said. "We need to get rid of the myth that this is the Grim Reaper."

"This year the event will be virtual due to the current health pandemic, but everyone felt that the event must go on to commemorate those that have lost their lives to the AIDS/HIV pandemic," spokesperson Shari Mesulam stated in an email to the B.A.R.

There will be musical performances by Juan Pablo Di Pace and Lena Marie.

Richard Zaldivar, a gay man who is the founder and executive director of the project, told the B.A.R. that he has "lost some sleep over" how to make the event work in virtual space.

"It's a huge difference," he said. "One being that for our community in L.A., World AIDS Day is our special day to come together in person to remember those who have died. There's a lot of emotion, crying, and hugging that because of COVID-19, many in our community can't get the community and spiritual support they need."

Zaldivar said he hopes older people accustomed to showing up in person will show up to the virtual event, 80% of which will be pre-recorded.

"On December 1 at 6 p.m. we will go live on Zoom, Facebook Live, and YouTube, and normally I'd go around [the crowd] with a microphone," for people to share their stories, he said. "Around 6:40 p.m. we'll go live to the AIDS monument [in Lincoln Park] and we will go to the Zoom platform and Facebook chat, then we'll return to the recorded session, ending with prayer and song."

Zaldivar said he hopes the event can capstone one of the most difficult years in modern American history.

"I'm hoping in this horrible year of anxiety and sadness over politics and COVID-19 that people may find a space to remember another epidemic that killed millions of people around the world called AIDS, and we come together as a community, as a world, to remember those who passed and feel the spirit of each other in this virtual platform," Zaldivar said. "We can go through any challenge we face knowing there is some bright light on the other end of the tunnel."