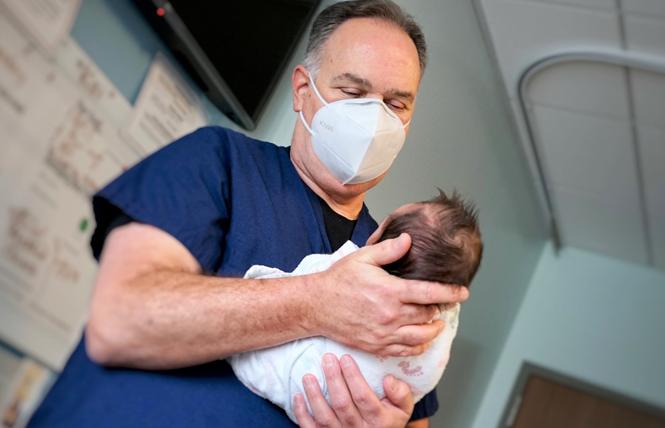 Nurse and midwife John Fassett held a baby at Sutter Health's California Pacific Medical Center Van Ness Campus hospital in San Francisco. He was conducting an in-patient postpartum visit, where he checked the patient's incision and vital signs. He also talked with her about breastfeeding and other postpartum aftercare. Photo: Courtesy Sutter Health

A gay nurse and midwife who lives in the Castro neighborhood has been named as one of four Nurse of the Year award winners by Sutter Health.

John Fassett, a certified nurse midwife who became one of the pioneer male midwives 26 years ago and has been a registered nurse for 40 years, was announced as an award winner November 2. Among the 1% of 20,000 certified midwives in the United States who is male, he has delivered over 4,000 babies.

"To me you don't get to see many miracles on this Earth, and that's why childbirth is amazing," Fassett told the Bay Area Reporter. "It's an amazing opportunity to witness the delivery. There's nothing like it, even after 40 years. It's such an amazing event; such a miracle."

Fassett, 60, moved to San Francisco in 1978 at the age of 18 from Sunnyvale to attend the University of San Francisco School of Nursing.

"I wanted to cut hair. That's what I wanted to do — cosmetology school," Fassett said. "[My parents] wanted medical school, and I talked them into nursing school."

After finishing his degree in 1982, Fassett joined the U.S. Navy and was stationed in Oakland. He worked in post-partum at first before being transferred to labor and delivery.

Fassett was then stationed at Adak Island in Alaska's Aleutian Islands, where he delivered babies before returning to the Bay Area to work in Santa Clara County.

He wanted to return to active military duty, but was discharged other than honorably on May 3, 1989 "for being gay," he said. (Before 1994, being gay was ipso facto against military rules. Only in 2011 did open service by lesbian and gay people become legal after the repeal of "Don't Ask, Don't Tell," a Clinton-era compromise that allowed gays and lesbians to serve but not openly.)

A friend to whom he disclosed his sexual orientation repeated it, triggering an investigation.

"I was charged and I ended up getting counsel," Fassett said, adding that he was discharged as "other than honorable" before a court-martial would have proceeded.

"I accepted that so I could move on with my life," he added.

Fassett quit drinking and took up his dream of going to graduate school. He entered UCSF in 1992 and graduated in 1994, becoming a midwife. His first job as a midwife was at the old St. Luke's Hospital in Bernal Heights, which became Sutter Health California Pacific Medical Center some years ago.

He has been a Sutter Health employee since 2012. He now works at California Pacific Medical Center Van Ness campus

More kids in the Castro
Fassett is also the chair of Sutter's Advanced Practice Committee and is a nurse reviewer for nurse midwife practice with the California nursing board. He has lived in the Castro since 1993 and said that the biggest change in the neighborhood since those days is the number of children.

"When I moved into my building, 75% of the building were gay men without kids," Fassett, who is single, said. "Now there's a lot of couples with kids. I love kids so for me it's been amazing. When I moved in there were no kids in the building."

Fassett was selected from among 16,200 nurses and midwives network-wide to win the award.

"Each of these winners of Sutter's first Nurse of the Year Award bring their best every day, living our organization's values and the Sutter nursing philosophy pillars while making a profound difference for the patients and families they serve," Sutter Health Chief Nurse Officer Anna Kiger, DNP, DSc, RN stated in a news release. "They also stand out because their co-workers see them as leaders in our noble profession. We are truly blessed to have them as a part of our organization."

There were 300 nominations and eight finalists interviewed, Fassett said, adding he was taking time off when he heard he had won the award.

"Patients and staff alike talk about how his ability to listen and his sense of humor keep them relaxed, even during the tense times that accompany pregnancy, labor, and delivery," a Sutter Health news release said of Fassett.

Fassett said he thinks he won because of his commitment to his job. Frances Dayao, a straight woman who is a patient services representative with Sutter and a colleague of Fassett's, testified to that commitment.

"He delivered two of my babies," Dayao told the B.A.R, adding that Fassett also officiated her wedding. "He's really very warm. Both of the days he delivered my kids he was not on call, but he stayed with me the whole day to make sure I was OK. He stayed up till the morning knowing he had a shift.

"I feel like he deserved [the award] a long time ago, so him getting it now is amazing," she added. "He's a loving, caring, good man. He didn't have to stay with me, he could have gone home and slept, but he did."

In 2002, Fassett got his other than honorable discharge overturned.