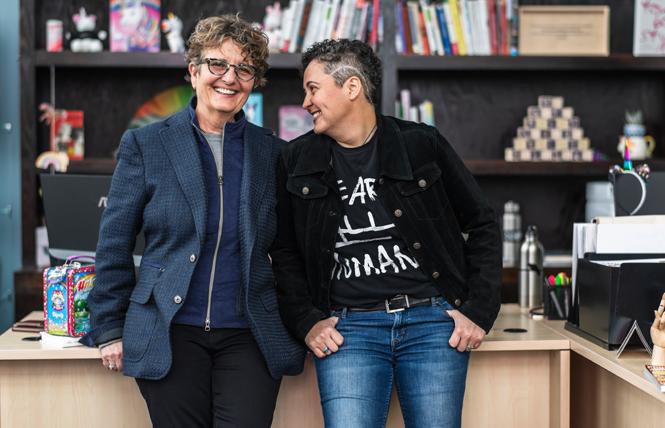 Seven years ago lesbian married couple Naomi Gonzalez and Fran Dunaway launched their Seattle-based TomboyX clothing line to market underwear and shirts specifically tailored to fit feminine physiques. Their designs were a hit with women and transgender shoppers and sales took off, with gay men also attracted to their colorful boxer briefs and undies.

"If you focus on fit and quality, it does work for every body type," said Dunaway, 60, who's been with Gonzales for two decades. "We do focus most of our marketing toward women or the trans community and trans men. We have done some shoots that include men, mostly gay men."

The genesis for their company came from Dunaway's inability to find men's button-down shirts that fit well. While the shirts were a hit, the company now focuses primarily on undergarments and loungewear, recently increasing their available sizes up to 6X. They work with a lesbian-owned factory in China to produce their specialty bras and are expanding to work with more women manufacturers in both Cambodia and Columbia.

"We felt responsible for figuring out what this community was really wanting," said Dunaway.

TomboyX is known for its imaginative prints, such as a rainbow unicorn design ($20 for briefs or boy shorts), and bright colors, like orange crush, sunshine, and plum. Its "hero product" it has built its brand around, noted Dunaway, is boxer briefs that fit women.

"We had a chat about it, and Naomi said we were getting a lot of requests for boxer briefs for women," she said. "When I typed it into an online search nothing came up, so we set out to make the most comfortable pair you could get."

"Especially nowadays so many products are worn by the opposite sex and work just as well. None of the product I have is necessarily for men or women, just whoever wants to buy them," said Baca, who is based in Los Angeles and has some of his clothes made in Napa County. "I am conscious of the fit of my products so both genders have the product that works for them."

Since launching his brand in 2013, and rolling out his first designs to the public a year later, Baca said it has been a "cool experience" seeing how his clothes are worn in ways he never expected.

"You design clothes and then see people wear your clothes in a different way than you would think to style it. You see women wear things traditional to men's wear and vice versa," he noted. "It is an awesome experience to see people put their own style on our products."

Philadelphia-based En Femme focuses on designing clothes for cross-dressers and transgender women. It is the second iteration of a company first begun by owner Tyler DeSouza's mother when he was in junior high in 1984. Divorced and running her own beauty salon, she was inspired to create clothing after seeing a British woman featured on "The Phil Donahue Show" who organized tea parties for men who liked to dress in female clothing.

"My mom said, 'I could do that.' She put a studio in our house and started connecting with the community," said DeSouza, 50, who joined his mom in the business after college. "Since I was 12 I have been around all gender-variant people. It is part of my world."

Their efforts grew into a successful mail-order catalogue business under the name Suddenly Femme. DeSouza revamped the brand in 2018 after his mom passed away and gave it a more modern name.

"We thought En Femme was a better fit," said DeSouza, whose male partner is from Marin County and assists him with marketing. "When a cross-dresser says they are going out, they say 'en femme,' or as a woman. It is what they all use."

The couple was in Palm Springs earlier this year for a fashion shoot featuring trans models. En Femme's designs skew feminine, such as floral wrap dresses or vegan leather mini dresses (prices vary), and are all sold online at https://enfemmestyle.com/

"The clothing we make and the things we do are all made for bodies assigned male at birth," explained DeSouza. "No matter what someone does in their journey to transition, there are things they can't change like their sleeve length, inseam, and how long their torso is. It is always going to be a challenge when buying clothing."

San Francisco and Los Angeles are two of the company's biggest markets. And DeSouza relies on his customers' feedback to inspire the types of clothes they design.

"I like them to help drive the bus," said DeSouza. "They are always evolving. I am not going to speak for them. I want to give them what they want."

"It kind of came from just our frustration and desire to express ourselves more fully," said Rapinoe during a recent virtual talk hosted by the University of San Francisco. "We felt there was a community out there pretty untapped."

The female-led company aims to make clothing by women for everyone, not just other women, noted Rapinoe, who is from Redding, California.

"Usually it is clothing made by men for everyone or by men for women, which we know doesn't work well," she said.

Baca said he welcomes other designers marketing their brands as unisex.

"I think it's really awesome so many people are kind of moving in that direction of unisex clothing. I don't think people want to be as constricted now, more than ever people are really rejecting just products that only fit into a certain box," said Baca.

TomboyX's Dunaway also said the more designers making unisex garments the better. For too long that segment of the fashion industry, she added, has been overlooked.

"I think the world is changing. It is a radically different place then when we first started in terms of our understanding and appreciation of the fluidity of both gender and sexuality," she said. "It is wonderful to see more women and LGBTQ people entering into entrepreneurism." 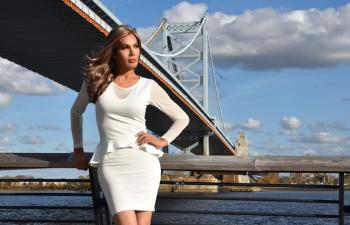 Sales hold steady
With people spending so much time at home in their loungewear because of the coronavirus pandemic, TomboyX has seen its sales increase about 50% this year, the same rate of growth it has seen in previous years. And it is bracing for a frenzied fourth quarter, as November is its busiest time of the year due to holiday shopping. It has several unique designs for the season, such as its nutcracker motif and, new this year, a golden night pattern.

"We had a little bit of worry at the beginning of the health crisis where we might end up so we took some precautions. But at the end of day things turned around," said Dunaway. "We're fortunate people are sitting around a lot in their underwear these days, so they have been shopping here."

As it happened, the women had decided to design a line of multiclavas ($10) prior to the start of the COVID-19 outbreak that their customers could use to tie back their hair or for other reasons. As they also make for a perfect mask, they quickly sold out and are on to their third run in designs like dinosaurs and winter bears.

"They were on a boat making their way here when the pandemic hit," recalled Dunaway.

DeSouza never had to close his business due to COVID but did adjust his procedures and workspace to protect the health of his employees. Bracing for a dip in business, sales instead surged in the spring and are slated to be up about 30% for the year.

"We were wondering why this was happening. The insight we have gotten from customers is they have a lot more time to spend at home. They are loving being able to dress more and to also invest a little bit more into their wardrobe," he said.

Baca also told the B.A.R. that his sales have held steady this year, but he is unsure of what to expect with the coming holiday shopping season.

"I will be the first to say clothing is not a necessity. If you have a basic T-shirt and pants to get by, you don't need the latest fashion gear," he said. "I think people are wanting to get back to that way of life where they can be individuals and different with their clothing. There is a lot of demand for it."

With people curtailing their travel this year to be with family on the holidays due to the health crisis, Baca said it is unclear if that will translate to people buying fewer gifts as well this December.

"It is going to be really interesting to see how it plays out," he said. "We will continue setting up our website and making sure we have everything available for people who do want to make purchases."