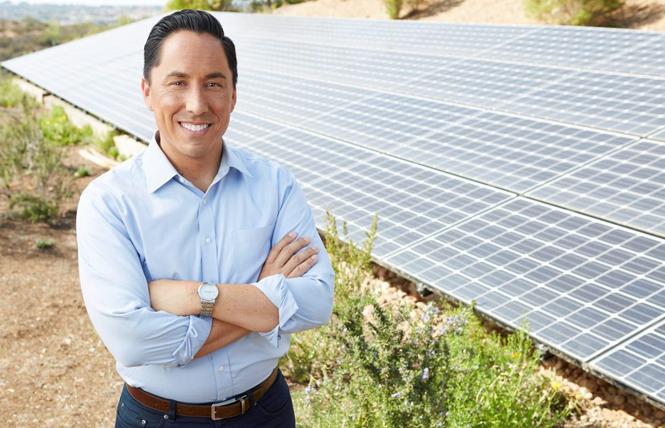 San Diego voters have elected the first LGBTQ mayor of one of the Golden State's largest cities after the commanding finish by gay Democratic state Assemblyman Todd Gloria in Tuesday's mayoral runoff race. He will also become the first person of color elected to lead the Southern California city.

For nearly two years Gloria, 42, had been seen as the odds-on favorite to succeed Mayor Kevin Faulconer, a Republican who is termed out this year. Gloria briefly served as San Diego's interim mayor in late 2013 through early 2014 due to the resignation of former mayor Bob Filner amid sexual harassment accusations.

After placing first in the March primary, Gloria appeared set to sail back into the mayor's office against his opponent, San Diego City Councilwoman Barbara Bry, 71. But in recent months Gloria was met with a barrage of false accusations involving a purchase of a building for city offices that he voted for as well as his support of a state bill ending homophobic treatment of LGBTQ young adults faced with having to register as sex offenders.

With the race appearing to tighten in recent weeks, concern within LGBTQ circles had grown that Bry, who faced calls to denounce the anti-gay smear campaign against Gloria, could come out on top. The San Diego County Registrar of Voters still had 370,000 ballots to tally as of Wednesday morning.

But according to the unofficial returns, Gloria was leading with 56% of the vote and Bry was at 43.71%.

"Tonight, I believe we have made more than history," Gloria told his supporters Tuesday night.

In an emailed note to his backers late Wednesday afternoon, Gloria thanked them for giving him an insurmountable lead in the race.

"And, while I'm incredibly grateful for the team of hundreds of volunteers who powered this campaign, I am most grateful to the voters of San Diego. You put your trust in me with your vote. That is a privilege I have cherished every day I've served in elected office," wrote Gloria. "There are still votes to be counted, and that is likely to take weeks. But you pushed us to a commanding lead last night that would be very difficult to overtake."

Out in the Central Valley gay Tracy City Councilman Dan Tavares Arriola, who turned 31 on Election Day, was stuck in second place in his bid for the city's open mayor seat, as the incumbent is termed out of office. Arriola, who was vying to be the first LGBTQ mayor and first mayor of color in Tracy, was at 31.43% as of Wednesday morning.

In first place was termed out Tracy Councilwoman Nancy Young with 36.22% of the vote. She was leading with 896 votes against Arriola, who works as a deputy district attorney for the San Joaquin County District Attorney's office. Should he be defeated, Arriola will remain on the City Council, as his term doesn't expire until 2022. 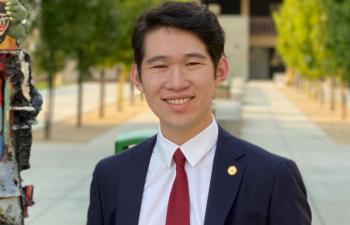 Justin Sha came up short in his bid for Fremont mayor. Photo: Sha for Mayor campaign

In the East Bay Justin Sha, 27, landed in second place in the Fremont mayoral race, falling behind Mayor Lily Mei, who easily won a second term with 50.66% of the vote, according to the unofficial returns Wednesday morning. Sha, who garnered 25% of the vote, was one of five candidates who qualified to take on Mei, the city's first woman and person of color to be elected mayor.

Gay West Sacramento Mayor Christopher Cabaldon, 55, who in 2004 was the first mayor to be directly elected by his city's voters, was holding on to first place Wednesday morning against his opponent, Martha Guerrero. Cabaldon was at 50% compared to Guerrero's 49.27% share of the vote, with a difference of just 174 votes between the two.

Should the unofficial vote count hold, Cabaldon will have secured his ninth consecutive two-year term as mayor.