Out in the World: LGBTQs worried about Trump reelection 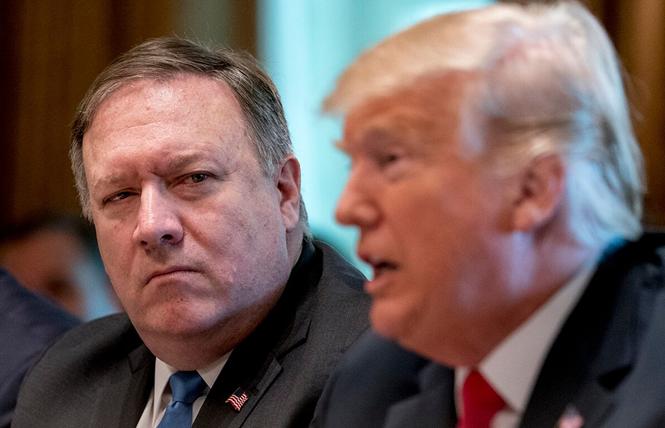 Two reports released last week give good reason why LGBTQ people around the world are afraid if President Donald Trump is reelected November 3.

The reports were published as Secretary of State Mike Pompeo checked off another goal by signing an anti-abortion declaration at the United Nations Human Rights Council in Geneva October 22.

The declaration also conspicuously omitted any mention of LGBTQ rights and queer families.

It was another push by Trump's administration in the weeks leading up to Election Day to set its anti-LGBTQ policies at the highest levels of government and possibly a sign to right-wing Christians that 13 years of a well-funded strategic plan is coming to fruition.

Pompeo signed onto the declaration along with Brazil, Egypt, Hungary, Indonesia, and Uganda.

The declaration was a rebuke of the council's progressive classification of abortion access and LGBTQ rights as universal human rights.

The damage Trump's administration has done to human rights globally, particularly to LGBTQ and women's rights, was detailed in two separate reports released by United Kingdom-based Asylum Research Center and Open Democracy in the final weeks of the 2020 election.

Anxious LGBTQs
The Trump administration's attacks on LGBTQ communities and women around the world left many LGBTQ people worried leading up to the U.S. election.

Ricardo Sales, founder of Mais Diversidade, told the Washington Blade that he is "very anxious about the U.S. election results."

"What happens in the U.S. influences so much what happens in Brazil," the São Paulo-based Latin American diversity and inclusion consultancy leader said, adding he will have "no good feelings," if Trump wins another term.

"What you do in the U.S. affects the whole world," said Anjeelee Beegun, director of Collectif Arc-En-Ciel, Mauritius's LGBTQ advocacy group. Mauritius is an island country in the Indian Ocean.

She told the Blade, "Another Trump administration would mean more funding for U.S.-based right-wing organizations to spread homophobia and transphobia globally."

Stern noted that it would give the Trump administration the opportunity to strengthen its coalitions to "oppose social justice movements and equal recognition of the family with some of the most conservative countries in the world."

The researchers looked at Eritrea, Iran, Iraq, Pakistan, and Sudan based on the number of resettlement of refugees and asylum claims made by people from these countries to the U.K.'s Home Office.

They found omissions of human rights abuses against LGBTQ people reported by other organizations on the ground. For example, in the Iraq country report societal discrimination and abuse affecting LGBTQ people were omitted, along with under reporting of sexual and gender-based violence. They found the same situation in a later issue of the Iran country report.

This is problematic globally because the U.S.'s human rights report, published annually in the spring since 1976, has long been perceived as the "gold standard" of human rights reports. The report is used by asylum seekers and refugees, civil service and human rights organizations, diplomats and governments around the world, and officials in the U.N.

"It's another shocking example of how cynical the administration has been in undermining due process and basic fairness in asylum adjudication," said Kate Jastram, director of policy and advocacy at the Center for Gender and Refugee Studies at UC Hastings College of the Law in San Francisco, in ARC's October 19 news release announcing the report.

Heather Nauert, the State Department's spokeswoman, told ARC the department was not "downgrading coverage of LGBT or women's issues," according to the report.

ARC researchers cited an Oxfam 2018 report that discovered reporting on LGBTQ issues abroad is down 21% under the Trump administration and reporting on women's rights is down 32%.

ARC co-director Liz Williams expressed concern about the effects of the modified reports on asylum seekers around the world.

"We are concerned that these omissions have the effect of denying the existence of rights or abuses and may result in certain types of asylum claims being dismissed if the US Department of State reports are relied upon in isolation," she said in the organization's release.

Expanding upon Williams' alert to decision-makers, she advised they should "consider country background evidence with a more critical eye, as lack of reporting on the risks LGBTQI+ people face in their countries of origin doesn't automatically mean such risks don't exist."

Sinister strategy
Open Democracy's series of investigative articles was the most alarming, exposing a long, well-funded, strategic campaign by a coalition of 28 U.S. Christian organizations to influence laws, policies, and public opinion against LGBTQ and women's reproductive rights around the world.

The articles exposed the power and reach that right-wing Christian conservatives have gained globally since 2007.

Center for Reproductive Rights' Alejandra Cárdenas accused the coalition members of working to "break down the entire human rights protection system," which "is their hidden and ultimate goal."

Connecting the dots, Open Democracy researchers uncovered an estimated $280 million global campaign against LGBTQ and women's rights since 2007. The extensive strategy targeted mostly Europe and Africa but positioned itself on six of the seven continents.

The actual amount spent to obtain the coalition's goals on a number of campaigns is unclear. Many of the organizations are exempt from reporting earnings and expenses for tax purposes due to being registered as churches and religious organizations with the IRS.

They also do not have to disclose donors or how the money they receive is being spent.

Churches and religious organizations are not legally allowed to contribute to or participate in any political campaign.

The law has not stopped coalition members from infiltrating the White House and possibly the U.N., suggesting a well-executed strategic plan to sway policies to their worldview, Open Democracy found.

Trump's personal lawyer, Jay Sekulow, is the longtime chief counsel of the American Center for Law and Justice, which invested an estimated $17,921,393 to the coalition's work, reported Open Democracy.

Franklin Graham, son of the late Billy Graham and president of the Billy Graham Evangelistic Association, has been an outspoken supporter of Trump's administration and was in the White House Rose Garden audience when Trump announced now-Supreme Court Justice Amy Coney Barrett.

Gay City News reported that 14 of the 28 coalition members have close ties to Trump.

Some of the organizations attacked the World Health Organization and spread disinformation and conspiracy theories, including about the novel coronavirus pandemic, according to Open Democracy.

One of the most infamous campaigns funded by the coalition was Uganda's so-called Kill the Gays bill. Ugandan Member of Parliament David Bahati authored the infamous bill in 2009. A watered-down version of the bill was signed into law and later struck down by the country's constitutional court in 2014. In 2019, Ugandan lawmakers threatened to revive the bill, but that did not materialize.

The coalition has invested an estimated $54 million in Africa, according to Open Democracy.

The coalition's biggest spender is the Billy Graham Evangelistic Association. The Charlotte, North Carolina-based organization invested more than $96 million, according to financial records Open Democracy was able to obtain. However, the association re-registered as a religious association with the IRS in 2015, eliminating reporting requirements that could be accessed by the public.

The association focused on Europe, investing an estimated $23 million between 2007 and 2014. The association supported Northern Ireland's cake case, defending a Belfast bakery after the bakers refused to make a cake for QueerSpace, a local LGBTQ organization, celebrating its 20th anniversary to support same-sex marriage. The case was sent to the European Court of Human Rights in 2019. A decision has not been announced.

More recently, the association has helped Poland with its so-called LGBT-free zones and it filed a number of lawsuits against U.K. venues and cities claiming religious discrimination after some of them canceled contracts for the Graham Tour UK that was slated to happen this past May.

Neil Datta, head of the European Parliamentary Forum for Sexual and Reproductive Rights, believes European leaders should be alarmed.

"I think many people, including decision-makers, should be very alarmed that U.S. Christian rights organizations are exporting their outdated views to Europe and are trying to influence European courts," Datta told Open Democracy.

The European courts and institutions need to do more to guard against these groups, which "are trying to undermine democracy, liberalism, and human rights," he added.

Dutch Member of the European Parliament Sophie in't Veld described the Christian crusaders as "operating like a secret army."

The coalition's second largest spender, Focus on the Family, has targeted its $6.2 million investment between 2008 and 2018 in Latin America. The organization has produced online shows, podcasts, and Spanish-language counseling that spread anti-gay rhetoric that being gay isn't normal and being transgender is a "disorder" that needs to be treated, reported Open Democracy.

Many of the organizations did not respond to Open Democracy's requests for comment.