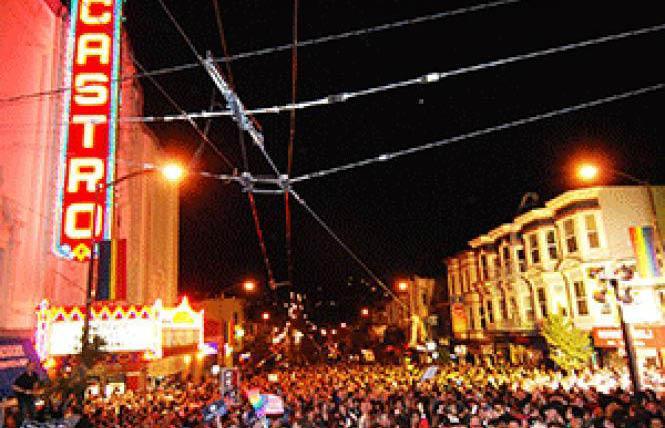 The iconic sign of the Castro Theatre is on again after a call on social media for the neon to light up the night over the city's LGBTQ neighborhood.

"Both the marquee and blade sign have been off since we closed operations in mid-March as we didn't want to give the impression that we were open nor did we want to attract people to the neighborhood during shelter-in-place," Steve Nassar, co-owner of the theater, wrote in an email to the Bay Area Reporter October 31.

"We're still not able to open under current guidelines but as the community seems to be emerging, we'll light up the blade sign after Halloween," he added. "It's an old neon system and has to be manually operated and the glass tubes watched carefully, but since there seems to be a desire we'll give it a try and see how it goes. As a large venue (1,400 seats) we're unlikely to open until 2021 (but good riddance to 2020 anyway)."

As the B.A.R. reported last week, Harry Breaux, a gay man who is a longtime community fixture, posted a message to the Castro Theatre management on Facebook urging it turn the lights on. He told the B.A.R. early November 2 that the theater had not responded to his inquiries but that he knew the lights had been turned on.

"It came so quickly," Breaux said. "I went by on Saturday [October 31] night to see if it was on and it wasn't, I saw two news reports on TV later and it wasn't on, then I saw on Facebook after that that it was on.

"It was a wonderful treat to see it on," he added.

After Breaux was told of the theater's statement to the B.A.R., he reiterated that there is nascent community support for funding the fixture.

"They don't seem to be responsive to the idea that the public wants to help," Breaux said. "It's a historical landmark. I know neon is not cheap, I get it."

Breaux wrote a Facebook post last week urging the theater, which has been at 429 Castro Street since 1922 — replacing a nearby theater built in 1910 — to turn on the sign.

"The large sign and the marquee on the theatre was the beacon that we saw and it gave the Eureka Valley its new moniker, The CASTRO," Breaux wrote about his first time seeing the lights when he first came to the Castro neighborhood in the early 1970s. "It pointed to a place in this country where tolerance and acceptance was available and many came. The sign on your theatre has great power, visually and psychologically. It has become the 'Heart of the Castro' in many ways."

David Cannon, who runs the Castro to Valencia Walking Around Facebook group, told the B.A.R. he also is supportive of the idea. He asked in a Facebook post "why couldn't the Castro CBD look into their budget to light up the symbol of gay San Francisco known throughout the world?" He was referring to the Castro/Upper Market Community Benefit District.

Cannon agreed with many of Breaux's sentiments in a follow-up interview with the B.A.R.

"Since I moved to the Castro in 1972, the Castro Theatre has become the marquee of our neighborhood's quirky gay world," he wrote to the B.A.R. "The flashing neon with clever messages spoke for us, the gay pioneers, that things are a bit different on Castro Street. As our 'home,' as in the SFGMC Home for the Holidays concert, the Frameline Film Festival and Noir City, the Castro Theatre was our communal living room."

Comments have ranged from support to questions about whether a group like the Castro CBD, which receives most of its revenue from property assessments, should foot the electric bill for a private business.

"The psychological aspect of it got to me," he said. "The Castro just became a cultural district and many businesses are going through hard times; considering those two things, surely someone, somewhere, somehow can find out how to bring back light. It's a worldwide beacon: Castro and Market. I mean, it was the leader of gay rights. A lot of people passed through there, a lot of people who aren't around anymore."