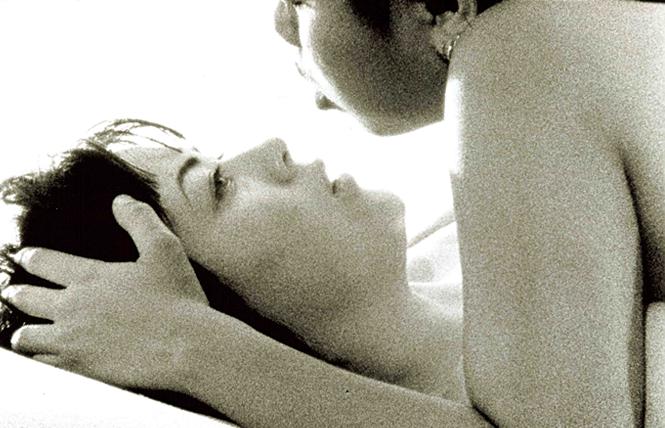 The documentary won accolades at festivals around the world during its two-year tour in the late 1990s. But Singaporean authorities banned the film from showing at the 1998 SGIFF, dashing Lim's dreams of showing it in the country of her birth.

"I really wanted it to speak to the LGBTQ community in Singapore. I wanted to share our stories with them," said Lim, who did not attend the recent screening.

Lim, a 56-year-old butch queer woman of color, immigrated to the United States in 1987 due to being persecuted by the Singaporean government for her LGBTQ activism.

On October 25, 23 years after Singapore's ban, Lim's film was shown at a one-time screening to a limited audience.

It was a small light of hope that unexpectedly appeared 10 days before the pre-festival when the country's newly formed Intercomm Media Development Authority granted SGIFF program director Kuo Ming-Jung's request to show the film.

IMDA officials gave the film an R21 rating, the highest rating for mature audiences in Singapore, limited the audience attendance, and restricted the filmmaker question and answer discussion.

On one hand, Lim is frustrated that Singapore's ban on the film was not completely lifted. On the other hand, she was excited and amazed, calling the moment "historic."

"I had hoped for a complete lift of the ban, but I'm excited that it screened at all," she said. "It has been my dream to screen my film in Singapore. It is my birthplace. It was incredibly exciting."

Last Sunday, an audience of 33 people sat in the 130-seat Oldham Theatre in the city of Singapore and watched the lesbian documentary.

The 25-minute film is about three Singaporean butch lesbians — D.P., Mabel Chan, and Lim — who immigrated to the United States in order to live their lives openly without discrimination and persecution.

The film is based on the conversations the women had at Lim's monthly Singaporean and Malaysian bisexuals and lesbians potluck that she hosted for a decade. It explores the women grappling with homophobia in Singapore, racism in Singapore and the U.S., and immigration. Throughout the film, Lim wove Eastern and Western cultures. A lesbian love scene separated the three stories.

During the recorded filmmaker question and answer discussion where audience members pre-submitted their questions, Lim was only able to speak about her personal experience when asked about LGBTQ issues.

Lim's mother, Christina, whom she only identified by her first name to protect her privacy, attended the in-person premiere, reporting back to her daughter that the audience received the movie positively, Lim said.

One of the audience members submitted a comment thanking Lim for "your courage for making this film" and praised Lim's mother for being there.

The IMDA denied a second screening of the film in the festival's regular lineup in November but left the door open to entertain future requests, Lim said.

Banned
To this day, Lim is not sure why Singaporean authorities prohibited the film from showing at the 1998 festival and banned it.

The B.A.R. could not confirm other queer films were shown at the festival in 1998.

Kuo, the festival director, did not respond to the B.A.R.'s multiple requests for comment.

"A few of my friends who were in Singapore at that time decided to organize some underground private screenings," said Lim. "There was a lot of fear, and it was a real fear that somehow the authorities would find out about the screening and they would come to the house and arrest people who had attended the screening."

The film showed at clandestine screenings in private homes. Attendees and organizers lived on edge while watching the documentary. At any moment, the police could burst in and arrest the women for watching the banned film. The fear was so palpable that the screenings quickly ended, Lim said.

"The government has a tradition of arresting citizens to instill fear," said Lim.

Then and now
Lim is not sure if the Singaporean government's one-time allowance is a sign of change in the conservative country.

The film is still banned, Lim pointed out.

M.P., a 35-year-old Singaporean-Indian lesbian who only wanted to be identified by her initials to protect herself and her family, echoed Lim's sentiments. M.P. immigrated to San Francisco four years ago with her partner via Vancouver, Canada where she lived for three years.

"I don't want to get too hopeful, it's Singapore," M.P. said, laughing.

She praised Lim for making the film at the time that she did.

M.P. was struck by the lack of change for Singapore's queer community from 1997 to 2020 despite economic progress, access to information, and an organized LGBTQ movement.

"Singapore is still the same," said M.P., who watched a screener of the film with Lim's permission. "That feeling of not being fully accepted in Singapore even for someone who left the country."

Lim believes the film is just as applicable today as it was two decades ago; the same conversations the butch lesbians have in the film are taking place a generation later.

"This 23-year film is still relevant today," said Lim, talking about concepts and ideas that are ahead of their time, noting there is a lot more awareness about immigration and transgender people of color today. "It takes time, maybe a couple of decades, for other folks to be on board in a social-political context."

As her film was traveling the film festival circuit and she worked to provide secret access to Singapore's lesbian community in the late 1990s, Singapore's LGBTQ community was becoming more socially active and visible.

At the time, one of Singapore's first LGBTQ organizations, People Like Us, was quickly gaining traction with its social events and discussion groups.

It also got the attention of Singaporean authorities.

Key organizers were brought in for questioning, Lim said.

"This wasn't even an arrest, they were brought in for an interrogation," said Lim. "That totally stopped the organization in its tracks. The organization essentially fell apart after that."

A decade after the film was released M.P. was living closeted at home and was out to select co-workers in Singapore.

At the same time, M.P. recalled police raiding lesbian parties without a reason or providing a "bullshit reason," she said.

"They would just come in and check everyone's ID," she said. "Getting caught at a party, it's a scare tactic."

Yet, Singaporean authorities continue to tell LGBTQ community members that they do not enforce Section 377A, the anti-sodomy law from the British colonial era, leaving them confused.

Lim and M.P. told the B.A.R. about how the government placed restrictions on the popular Pink Dot Singapore event, a one-day event that brings the country's LGBTQ community together for a picnic in a park.

Launched in 2009 with 2,500 attendees, Pink Dot rose to its peak attendance during its first decade, attracting an estimated 28,000 people, according to OutRight Action International. Authorities attempted to curb the event's growth, restricting participation to only include Singapore companies and residents, reducing sponsorship and attendance to 20,000 in 2019, Lim and M.P. said.

A bright light for Lim and M.P. is that Singapore companies stepped up to sponsor the event and celebrities have increasingly taken to the stage in support of Singapore's LGBTQ community.

Free to be
More than 30 years ago, that was not the case for Lim and many other lesbians like her who came to the U.S. to live openly and pursue their dreams.

In her early 20s, Lim landed in New York and traveled throughout the U.S. for a year before she made her way to San Francisco and a community of Asian American lesbians. She found that community by networking with fellow travelers through backpacking in Europe, corresponding with them by letter for years.

"I was so ecstatic. I was beyond the moon," Lim said about becoming involved in San Francisco's LGBTQ movement and began living her teenage dream of being a filmmaker: two things that were not possible in Singapore. "It was so liberating to be out and marching out there collectively as a community. It just felt so good."

More than two decades later, M.P. and her partner, similarly, quickly found community, not only within the Asian American lesbian community, but also among an Asian lesbian immigrant community. That is one of the major differences she noted about her experience compared to the women in the film.

"I think how lucky I am to have moved in this day and age, barring the current administration," she said. "People don't look at me funny because there are so many more Indians here, even in San Francisco people are aware of Singapore; people are aware of Asia."

Today, Lim teaches film production to queer women, transgender, and gender-nonconforming people of color at the Queer Women of Color Media Arts Project she founded in 2000. She is also an adjunct professor at the University of San Francisco. Lim earned her degree in cinema from San Francisco State University.

QWOCMAP has the largest catalog of movies made by and for LGBTQ people of color, with more than 450 movies. It produces the annual Queer Women of Color Film Festival.