Editorial: The pope does not support marriage equality 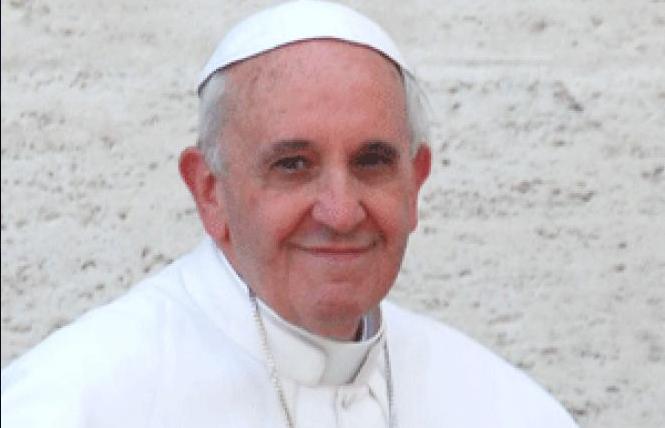 Pope Francis has indicated that he is a pontiff who wants the Catholic Church to look outward and engage with the wider world, and to emphasize the pastoral care of marginalized people whether they are Catholics or not. He has gone further than any pope to consistently recognize the presence and worth of LGBTQ people, even if these were only his opinions and not far enough for many. Progressive Catholics have found hope in his positions that prioritize people rather than rules, openness rather than restrictions, charity rather than punishment. His recognition of a frail humanity deserving of love and support has made him a target of conservative Catholics who prefer a pope who stresses strict conformity to church dogma over ministering to people as they are. But this doesn't mean Francis or the church will recognize same-sex relationships any time soon.

Last week, the pope made headlines by saying that he was open to legal civil unions between people of the same sex. While this does not change the Roman Catholic Church's opposition to homosexuality and same-sex marriage, as the Reverend James Martin pointed out in an interview with the Bay Area Reporter, it does represent a marked change of tone in attitudes toward the LGBTQ community from the leader of the world's largest Christian church.

The following day, San Francisco Archbishop Salvatore Cordileone's official response extinguished any expansive interpretation of the pope's message. He pointed out that in January he and other nearby bishops had an audience with the "Holy Father [who] clearly differentiated between a civil arrangement which accords mutual benefits to two people, and marriage. The former, he said, can in no way be equated to marriage, which remains unique."

Francis and Cordileone see civil unions not as a relationship based on love akin to marriage but as a practical arrangement that affords legal rights to two people. Cordileone added that "a civil union of this type (one which is not equated to marriage) should be as inclusive as possible, and not be restricted to two people of the same sex in a presumed sexual relationship. There is no reason, for example, why a brother and a sister, both of whom are unmarried and support each other, should not have access to these kinds of benefits." In other words, these relationships should not be confused with marriage.

It would be incorrect to say that the pope or the Catholic Church is open to changing its teaching on the sacrament of marriage, which is strictly reserved for a sexual union between a man and a woman for the purpose of having children. Cordileone ended his statement by stressing that "marriage is unique because it is the only institution that connects children to their mothers and fathers, and therefore is presumed to be a sexual relationship. Indeed, the sexual relationship that marriage is presumed to involve is the only kind by which children are naturally made. The nature of marriage, the place of sex within a virtuous life, these great teachings of the Church come to us from God, are illuminated by reason, and do not change."

In the view of the church, the loving relationships of LGBTQ people can never be sanctioned by marriage because our unions cannot produce offspring. As has been pointed out before, this somehow doesn't apply to straight couples who choose not to have children or are incapable because of medical reasons, or couples who marry after childbearing age.

For the archdiocese, marriage is even above the law and the safety of the public. This summer, the city had to issue a cease and desist letter to stop a marriage ceremony from flouting COVID regulations against large crowds gathering. As the San Francisco Chronicle reported, at least 10 people contracted COVID-19 at an indoor wedding at which a deputy city attorney appeared at the last minute to demand it be reduced in number and moved to a safer location outdoors. Both the religious order that operates the church and the archdiocese have denied any knowledge of purposefully breaking any health rules.

Francis has projected an image of a forgiving father rather than a dogmatic scold, giving comfort to progressive Catholics who yearn for a church that emphasizes social justice over strict adherence to church teaching. But this is cold comfort, because the church catechism continues to deny the full humanity of LGBTQ people by teaching that homosexual acts are "intrinsically disordered." Despite what people interpret in Francis' message, it is clear that he and the local archbishop agree that marriage is paramount and reserved for a man and woman.