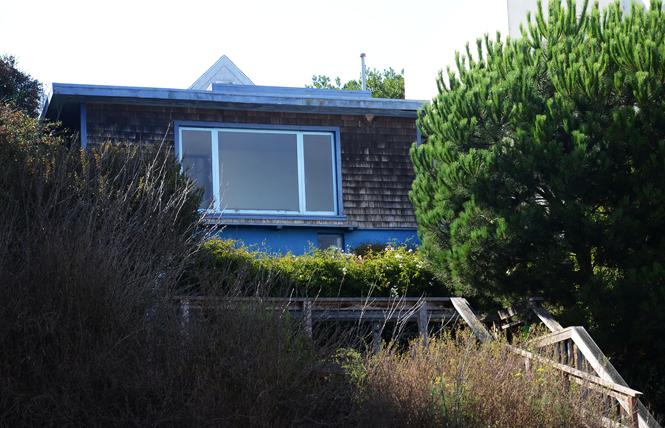 The former home of late lesbian pioneers Phyllis Lyon Martin and Del Martin is expected to be landmarked by the San Francisco Board of Supervisors. Photo: Rick Gerharter

It was 2011, I was a few years out of graduate school, and I was back at the historic preservation firm that had hired me as a very inexperienced architectural history research assistant in 2003. My master's thesis was centered on the historic lesbian community of North Beach, and I was looking for a pro bono project to marry my passions for historic buildings and LGBTQ history. After introducing myself to Lyon after a panel at the GLBT Historical Society Museum, I sent her a letter asking if she would let me nominate her home — the house she shared with wife Del Martin for 53 years — for listing in the National Register of Historic Places. "In my field," I wrote, "listing a building in the National Register is one of the highest honors we can bestow upon important places, and I would be thrilled to have your consent to work on the nomination of your residence." At the time, I noted, there was only one building in the country listed in the National Register for an association with LGBTQ history — the Stonewall Inn in New York City. "I would like to change that," I said. When I picked up the phone to answer her call, Lyon invited me to her house to explain the landmarking process.

Walking up the steps to the cottage at 651 Duncan Street, I had the same tingly feeling I get when I'm touring a beautiful building or a significant historic site. "This is hallowed ground," I thought as I imagined all the different feet that had marched up those steps since 1955 when Lyon and Martin purchased the house. Lyon greeted me warmly and invited me to sit with her in the living room. She sat in what was obviously her chair, next to a matching chair that was obviously Martin's — heartbreakingly empty after Martin's passing a few years earlier. The wall behind her was chock full of framed certificates and accolades that spoke to a nationwide appreciation for the power of the Lyon-Martin partnership. The enormous (now-famous) tripartite picture window framed one of the most stunning views of San Francisco I'd ever seen.

One of the first things Lyon said to me in our meeting was that she had decided against National Register designation for her home. She knew the value of her property on that hillside in Noe Valley and was concerned that landmark designation would prevent her from selling if she needed the funds for her long-term care. Although deeply disappointed, I understood her reluctance and settled in to enjoy the rest of our visit. Walking back down those steps that evening I was content with the outcome but knew one thing for certain: 651 Duncan Street is one of the most significant LGBTQ historic sites in the country, with or without official designation. Sadly, Lyon died in April at the age of 95.

Fast-forward to September 2020, scrolling mindlessly through my Facebook newsreel, an article on SF Gate announced the sale of 651 Duncan Street with the following headline: "756 square foot home atop Noe Valley sells for $2.25M." The author gushes about how this tiny home was in such high demand that it listed in mid-August and closed escrow two weeks later. She calls the view from the living room "multi-mil" but says the view doesn't justify the price. So what does? The fact that the very modest Lyon-Martin house sits on a 5,600 square foot double lot: the "last parcel of undeveloped land atop Noe Valley" where homes "have easily sold for $5-6M." As long as the new owner "keeps construction costs under control," she cautions, "a turn over (read: flip) of this property could be very profitable."

Within a few days, I had rallied the troops and organized a community meeting co-sponsored by the GLBT Historical Society and San Francisco Heritage. Meeting attendees included caretakers of Lyon who were with her until her passing, lifelong friends of Lyon and Martin, and fans and supporters of the couple from as far away as Minnesota and New York. Also among the Zoom participants was gay District 8 Supervisor Rafael Mandelman, who announced his intention to initiate the San Francisco landmark process for the Lyon-Martin house. By the end of the meeting, we had formed a community advocacy group — the Friends of the Lyon-Martin House — to develop a preservation plan for 651 Duncan.

True to his promise, Mandelman proposed landmarking at the Board of Supervisors' Land Use and Transportation Committee hearing October 19. Committee Chair and District 3 Supervisor Aaron Peskin, who asked to be a co-sponsor of the resolution, remarked, "If there is a deserving landmark, this is certainly it." The following day at the full Board of Supervisors hearing, the group voted unanimously to initiate the landmark process. The National Trust for Historic Preservation submitted a letter in support, writing: "[A]cross the country, historic places that reflect the history of the LGBTQ+ community are woefully underrepresented on registries of historic properties. Clearly, there is a need for the identification, recognition, and preservation of many more LGBTQ+ historic sites to ensure that we are telling a full and truthful American story."

The Friends of the Lyon-Martin House is now organizing a second community meeting to discuss how we can see this landmark nomination through to the end. Please join us by signing up here.

Shayne Watson, a lesbian, is an architectural historian specializing in LGBTQ history. She is co-author of the Citywide Historic Context Statement for LGBTQ History in San Francisco and the San Francisco chapter of LGBTQ America, the National Park Service's nationwide LGBTQ theme study. She is the founding chair of the GLBT Historical Society's Historic Places Working Group.