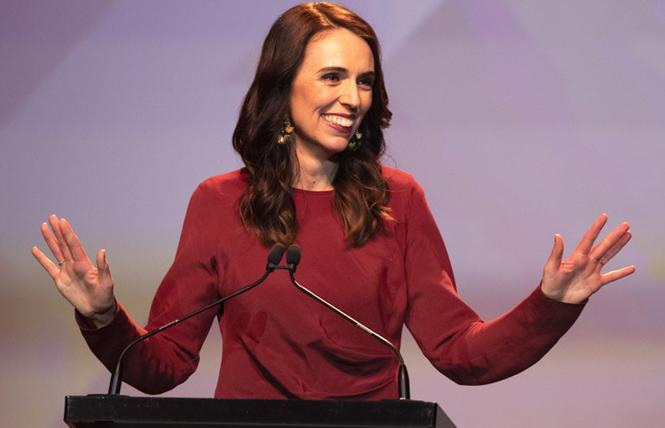 New Zealand's new parliament made history in a number of ways October 17 — it is majority woman-led and the most diverse in the country's history.

The liberal-left Labour Party's landslide win garnered Prime Minister Jacinda Ardern another term and grabbed 64 of the 120 parliamentary seats for the party.

Voters also elected the most LGBTQ representatives to a country's parliament.

About 10% of New Zealand's new members of parliament are openly LGBTQ-identified, unseating the United Kingdom from the title.

LGBTQ members represent 7% of the U.K. parliament, with 45 out members serving in the 650-member House of Commons.

Kiwis, a common self-reference used by New Zealanders, voted in seven more openly LGBTQ members of parliament, bringing the total in the country to 12.

Queer New Zealanders were excited by the election results.

"Numbers do matter," reelected lesbian Labour MP Louisa Wall told AAP ahead of the election. "We have a critical mass with high visibility and we're seen as valid. If we do end up being the most LGBTQI representative parliament in the world, that would be simply great."

Some LGBTQ New Zealanders were particularly pleased about newly elected out Greens MP Elizabeth Kerekere, who campaigned on queer issues.

"I think for our communities a lot of us know she will be waving the flag as one of her main priorities," Tabby Besley, managing director of the LGBTQ youth organization InsideOUT, told the New Zealand Herald. "We know she's not going to be shy around raising these issues so that is quite exciting."

Pushing through LGBTQ legislation, such as banning conversion therapy and legal gender recognition, has been slow-moving in the past two terms, said Besley and Jaimie Veale, Ph.D., president of the Professional Association for Transgender Health Aotearoa.

They hope that will change now with more representation.

"Thinking of the transgender — we are hopeful that the current makeup of parliament will be more responsive to our needs now," said Veale, who is also a senior lecturer in psychology at the University of Waikato.

LGBTQ Kiwis make up an estimated 3.5% of New Zealand's population of nearly 5 million, according to the country's 2018 general social survey.

The voting shift wasn't missed by Paul Spoonley, a professor at Massey University College of Humanities and Social Sciences.

Spoonley told the Independent it signaled an important generational change.

He pointed out that a majority of the long-standing older, white, male politicians who previously left were replaced by a much more diverse elected leadership.

Ardern, 40, was the world's youngest woman head of state when she was first elected as New Zealand's 40th prime minister in 2017. She was also the second head of state to give birth while in office.

The last woman head of state to give birth while in office was the late Pakistani Prime Minister Benazir Bhutto in 1990.

Ardern has been hailed for her handling of the global novel coronavirus pandemic. Her swift response working with scientists and calm and empathetic leadership has kept COVID-19 from devastating the country. The island nation reported fewer than 2,000 cases and 25 deaths due to COVID-19 to date, according to Worldometer.

The Greens won 10 seats with about 7.6% of the vote share. Women, Indigenous, and LGBTQ leaders make up the party's majority. LGBTQ representation from the Greens in parliament is estimated at about 40%.

Neither of New Zealand's conservative parties — the Act and the National — currently have openly LGBTQ members.

Leading up to the election, the Independent reported that Ardern was already building an alliance with the Greens.

"The Labour Party and the Greens represent the contemporary face of New Zealand in parliament," said Spoonley.

History was also made by Ibrahim Omer, a 42-year-old refugee from Eritrea, as New Zealand's first elected MP from Africa, and human rights lawyer Vanushi Walters, 39, who is the first MP of Sri Lankan descent.

Taking advantage of the spotlight placed on Japan ahead of the 2021 Tokyo Olympic and Paralympic Games, transgender activist and former Olympian fencer Fumino Sugiyama and women's soccer player Shiho Shimoyamada, along with LGBTQ and human rights activists, called on Japan's government to pass an equality law October 15.

LGBTQ acceptance has been growing in Japan in recent years as some cities legally recognize same-sex unions. Tomoya Hosoda, a transgender politician, was elected to the city council of Iruma, Saitama Prefecture, in 2017.

According to Human Rights Watch, Japanese ambassadors at the United Nations voted twice, once in 2011 and again in 2014, in favor of resolutions calling for the end of violence and discrimination against LGBTQ people based on the Olympic Charter.

The Olympic Charter prohibits discrimination based on sexual orientation.

However, being queer in Japan remains socially taboo. Many Japanese succumb to family and societal pressure and remain in the closet, the activists explained.

"In this country, equal rights for LGBT people are not guaranteed by law or in their social lives," Yuri Igarashi, a co-chair of the Japan Alliance for LGBT Legislation, told reporters.

Sugiyama said that about 15 years ago, when he was competing, he was afraid of discrimination. The 39-year-old did not come out as transgender or disclose his gender identity at that time, he told the reporters.

Last year, Shimoyamada, a Japanese women's soccer player, became the first prominent athlete to disclose she has a same-sex partner.

The 25-year-old former midfielder with Germany's SV Mappen who now plays for Japan's Sfida Setagaya, explained to reporters at the news conference about anti-gay bullying and harassment by coaches and teammates that happens in sports that have led some queer athletes to retire.

"In sports, you often have to hide who you really are, and in this environment you can't really feel safe and enjoy sports," she said, reported the Associated Press.

Igarashi cited the Olympic Charter in calling upon Japan's government to legally protect LGBTQ Japanese people by passing an equality law and setting an example for the world.

"We call for the passage of an LGBT equality law in time for the Tokyo games, and as an Olympic legacy," Igarashi said.

Shimoyamada added, "I have high expectations that an equality law can create an environment where people can speak up when they face discrimination."

The coalition of LGBTQ and human rights groups is made up of Athlete Ally, the Japan Alliance for LGBT Legislation, and HRW.

Athlete Ally promotes diversity in sports. The Japan Alliance for LGBT Legislation is a coalition of about 100 Japanese LGBTQ organizations. HRW is an international human rights organization.

The organizers will present the petition to each of Japan's political parties ahead of the Tokyo Olympics, reported Mainichi Japan.

The activists hope to have a law enacted by next July, the organizers said.

Advocates called for the court to overturn its verdict and to end the persecution of gays in the nation's military.

Representatives of Amnesty International Indonesia and LGBT Rights Association of Southeast Asian Nations Secretariat Sexual Orientation and Gender Identity Expression Equality Caucus raised concerns about the effect the action will potentially have on other gay officers and Indonesia's LGBTQ community in general.

Military court documents for the case were uploaded to the Semarang Military Court's website October 14.

It is unclear when the verdict hearing was held, reported the Jakarta Post.

The court documents showed that a military court panel sentenced a man to prison and stripped him of his military duty for having sex with another soldier.

Presiding Judge Lieutenant Colonel Eddy Susanto of the Semarang Military Court read the verdict sentencing the defendant, identified only as chief private P., to one-year imprisonment and dismissed him from service in the Indonesian Military, known as the TNI, for having sex with another member of the military.

Homosexuality is not illegal in Indonesia. However, the government has conducted crackdowns against the LGBTQ community and spread anti-gay rhetoric within recent years.

P. was charged with willful disobedience under Article 103 of the Military Criminal Code on disobedience to service orders for having sex with a subordinate.

The Post reported the panel of judges cited a telegram the TNI chief sent in October 2019 informing all military personnel that LGBTQ relationships were prohibited. The text was similar to messages warning of gay relationships and potential consequences sent in 2009 and 2004.

This is not the first time a military officer has been punished for having gay sex, Hamid noted. Another soldier was also prosecuted under the same policy in March, according to Amnesty International's records.

A judge sentenced two men to three years in prison with a fine, and 33 men and nine women to one-year suspended sentences September 3 for attending the event July 24.

The 44 people were convicted of "same-sex relations," "public indecency," and "subjecting others to harm by breaking COVID-19-related quarantine measures," according to an October 15 news release from HRW.

Police raided the private event and arrested 44 people, many of them university students, after neighbors in el-Kharoub, a district in Constantine Province in northeastern Algeria, complained, reported HRW.

Police cited the two men's appearance along with decorations, flowers, and sweets commonly used at weddings as evidence, according to court filings an unnamed Algerian attorney told HRW, according to the release.

According to HRW, homosexuality is punishable by up to two years in prison under Article 338 of Algeria's Penal Code. The law also increases the penalty for public indecency to six months to three years in prison and a fine if it involves "acts against nature with a member of the same sex," whether between men or women, under Article 333 of the code.

"Algerian authorities' attack on personal freedoms is nothing new, but arresting dozens of students based on their perceived sexual orientation is a flagrant infringement on their basic rights," said Rasha Younes, LGBTQ rights researcher at HRW.

Younes called the laws "regressive" and for the charges to be dropped and for the event attendees' immediate release.