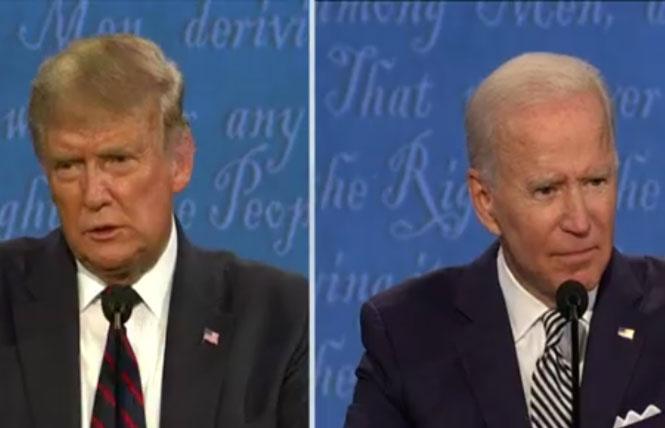 The final presidential debate set for October 22 must include at least one question about LGBTQ issues, especially since President Donald Trump has spent his entire term rolling back our rights and attempting to make us invisible through his administration's policies. So far this cycle, in the first presidential and one vice presidential debate sanctioned by the Commission on Presidential Debates, not one question has referred to the queer community, noted Media Matters for America. This week's debate between Trump and his Democratic challenger, former vice president Joe Biden, was canceled after the president refused to participate in a virtual format despite having been recently infected with COVID-19; that leaves the one remaining faceoff next week. Media Matters noted that ignoring the LGBTQ community in commission-sanctioned presidential debates is nothing new. Going back to the 2016 cycle, over 250 questions have been posed to the candidates, and not one was about issues specific to our community.

Ahead of the October 7 vice presidential debate, a coalition of LGBTQ advocacy organizations — including the Human Rights Campaign, LGBTQ Victory Fund, and Media Matters Action Network — sent debate moderator Susan Page a letter urging her to ask candidates about LGBTQ issues. According to Yahoo News, the letter "specifically zeroed in on stances taken by Pence and the Trump administration as racist, misogynistic, and transphobic, and urged both Page and the commission to press Pence on his record." The letter was ignored. GLAAD pointed out in its own statement ahead of the vice presidential debate that Pence has yet to be asked about his role in the administration's record of anti-LGBTQ policy and rhetoric. According to the nonprofit's Trump Accountability Project, there have been 181 attacks (and counting) since Trump and Pence took office on January 20, 2017. GLAAD President and CEO Sarah Kate Ellis stated, "LGBTQ voters may cast the deciding votes in this election and we need to be part of the conversation. The moderators must include us. The candidates must acknowledge us. LGBTQ people deserve to know where the candidates stand on issues of life and death to us. We will continue to demand to be seen and heard." GLAAD, which monitored and live-tweeted the vice presidential debate, noted that the fly that sat on Pence's head for two minutes got more airtime during the debate than queer issues did.

"The vice presidential debate was a particularly crucial opportunity to examine Pence's record of opposing LGBTQ rights through decades in public office," Media Matters stated. "During his 2000 campaign for Congress, he ran on an extremely anti-LGBTQ platform that called for funding to combat HIV/AIDS to be redirected to 'institutions which provide assistance to those seeking to change their sexual behavior.' According to the New York Times, that statement 'has been widely interpreted as signaling his support for conversion therapy,' though Pence's spokesperson has denied it. His platform also opposed same-sex marriage, anti-discrimination laws, and LGBTQ service in the military." Conversion therapy, of course, has been widely debunked by medical experts and groups like the American Medical Association. California and 19 other states ban the practice on minors.

While Biden's views on LGBTQ rights have evolved over his career (like most straight Democratic elected officials), we suspect that he would love to tout his record on LGBTQ equality. It was Biden, after all, who famously nudged then-President Barack Obama into supporting same-sex marriage publicly, when in May 2012 he said in an interview that he supported same-sex marriage; a few days later, Obama took the same position. It was a major step forward for our community, as the issue was going through the courts at the time, leading to the favorable U.S. Supreme Court decision in 2013 in United States v. Windsor that overturned a key provision of the Defense of Marriage Act (which Biden voted for as a senator in 1996, hence, his evolution) and another decision that year that allowed California to resume same-sex weddings.

The mainstream media must drop its habit of largely ignoring LGBTQ issues during presidential races, especially this year when the president seeking reelection is openly and aggressively targeting LGBTQ people and rights. It began six months after he took office when Trump tweeted his desire for a ban on trans people serving openly in the armed forces, which later went into effect. And it has only accelerated with this administration's attacks on our lives and ability to live free of discrimination, some of which included supporting employment discrimination by filing amicus briefs, creating a religious discrimination division within Health and Human Services, and eliminating guidance for schools on trans students.

Crucially, Trump has been hell-bent on solidifying his anti-LGBTQ bona fides by appointing judges who have alarming anti-LGBTQ records. In California, we've seen this on the 9th U.S. Circuit Court of Appeals, which used to be one of the most liberal appellate courts in the country. His new Supreme Court pick, Judge Amy Coney Barrett, displayed a retroactive belief on LGBTQ people when she said during her Senate confirmation hearing Tuesday that she has "never discriminated on the basis of sexual preference" and that "like racism, I think discrimination is abhorrent." Sexual preference? Yikes. Well, we know how she'll vote the next time an LGBTQ rights case comes before the high court. For someone who's 48 years old and a former college law professor, her comment displays a complete lack of awareness of LGBTQ people today. (After a break in the hearing, Barrett came back and apologized for her "preference" comment, but the damage was done.) As the National Center for Lesbian Rights Born Perfect campaign pointed out, for many years LGBTQ people have cautioned against using the outdated term "preference" because of its false and harmful implication that an individual's sexual orientation is a choice that can be changed.

We know that another Trump administration will place a larger target on our backs. We expect a Biden administration to at least treat us as human beings and equal citizens. LGBTQ people and our issues will continue to be marginalized or, worse yet, made invisible if we are not part of the political discussion. The country deserves to hear the candidates' views on LGBTQ issues, as there is a clear contrast between Trump and Biden.