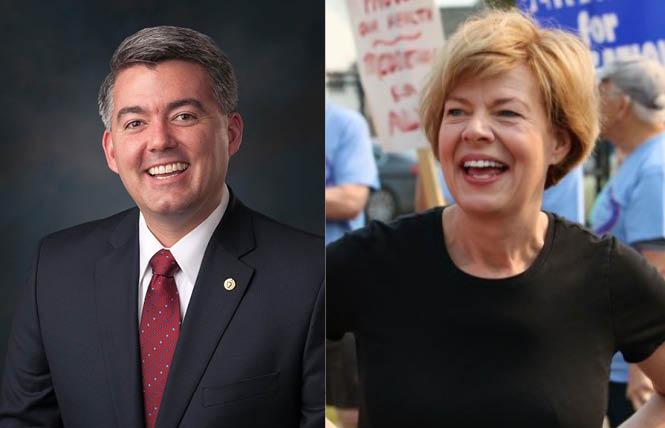 A bill sent to the president's desk last month that designates 988 as a national suicide prevention lifeline is the first specifically LGBTQ-inclusive bill to pass both houses of Congress unanimously.

"The bill does something pretty simple — it designates the national suicide prevention hotline to the number 988, a nice, simple number," Sam Brinton, a gender fluid, bisexual person who is the vice president of government affairs at the Trevor Project, told the Bay Area Reporter. "At the end of the legislation, it calls for specialized [hotlines] for different groups. If an LGBTQ young person calls the crisis hotline, they may need something a little different — we have that with the veterans' crisis hotline — for better service.

"LGBTQ youth are four times more likely to attempt suicide," Brinton added. "This may save thousands, if not hundreds of thousands, of LGBTQ lives."

Brinton said that the Trevor Project was heavily involved in lobbying for the legislation, which was introduced by Senators Cory Gardner (R-Colorado), Jerry Moran (R-Kansas), Jack Reed (D-Rhode Island), and Tammy Baldwin (D-Wisconsin), who is the first openly-LGBTQ person elected to the U.S. Senate.

"In America, we lose about 45,000 people every year to suicide, including more than 6,100 veterans, making it one of the leading causes of death in this country," Baldwin said in a statement at the time of the bill's Senate passage. "We need to do everything we can to prevent suicide and that means improving the tools we have to help people who are suffering from depression or other mental health issues. I'm very proud my bipartisan legislation has passed the full Senate so we can make it as quick and easy as possible for Americans in crisis to get the help and support they need through the National Suicide Hotline."

The legislation passed the Senate May 13 and the House of Representatives September 21. It was almost certain to be signed by President Donald Trump, Brinton said at the time of the interview, which was before it was announced the chief executive had been diagnosed with COVID-19.

"It is nearly assured to be," Brinton said. "It will become law without the president's signature, but unanimous bills have never been vetoed by a president. Our contacts at the White House have indicated interest in signing."

The 988 number will be phased in over a period of two years, according to current Federal Communications Commission plans. It requires LGBTQ cultural competency training for all lifeline counselors. LGBTQ youth are among the high-risk populations routed through an integrated voice response.

"It was important to us that this bill not be a partisan or a particular solution, but a holistic solution," Brinton said. "It was hundreds of meetings all over the [Capitol] Hill that helped make this unanimous. There hasn't been much coverage of good news in this age of bad news — something the nation can come together on to save lives."

Minority youth more unhappy, disturbed by 2020's events
As the B.A.R. previously reported, rising suicide rates in recent years have been compounded by this year's COVID-19 pandemic-associated shutdowns. One-in-four Americans aged 18-24 considered suicide in the 30 days before a June study from the U.S. Centers for Disease Control and Prevention.

The numbers are worse among minority youth. A poll on the subject of mental health released by the Trevor Project October 2 found that 40% of LGBTQ youth "stated that COVID-19 impacted their ability to express their LGBTQ identity," including three-in-five transgender and nonbinary youth. The poll is based on a national sample of 1,200 young people between the ages of 13—24, including 600 LGBTQ youth and 600 straight/cisgender youth.

Seventy-three percent of LGBTQ youth and 78% of Black LGBTQ youth were negatively impacted by reports of police violence against Black Americans this year, as trust in the police as necessary for public safety has sharply declined among those groups.

"This year has been difficult for everyone, but it has been especially challenging for LGBTQ youth, and particularly Black LGBTQ youth, who have found themselves at the crossroads of multiple mounting tragedies," Trevor Project CEO Amit Paley stated in a news release. "Since the onset of COVID-19, the volume of youth reaching out to the Trevor Project's crisis services programs for support has, at times, doubled our pre-COVID volume.

"We've known that LGBTQ youth have faced unique challenges because of the countless heartbreaking stories we've heard on our 24/7 phone lifeline, text, and chat crisis services; but these findings illuminate the existence of alarming mental health disparities that must be addressed through public policy," Paley added. "And it's abundantly clear that recent acts of racism and anti-Black violence have also had a profoundly negative impact on the mental health of our nation's young people."

Youth suicides in California increased 15% from 2009-2018, and the total number of self-harm incidents increased 50% in the same timeframe, according to the audit.

Twenty-five percent of the six local educational agencies, or LEAs, reviewed for the audit did not employ a single mental health professional, and none employed the recommended amount of counselors, psychologists, nurses and social workers. Further, none had adequate policies or training for preventing youth suicide.

"The state auditor's report on the lack of resources and policies for our children is a loud and clear call to action," Assemblyman James Ramos (D-Highland), one of four legislators who asked for the audit to be undertaken, stated in a release. "It serves to guide policymakers about what we need to do to help save the lives of our children. Suicide is the second leading cause of death among Native American youth, and rural and Northern parts of our state are also hit hard by this tragedy which rips apart families and communities."