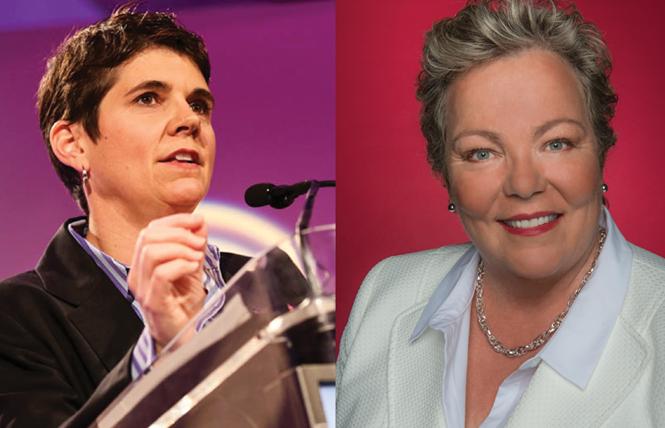 The leaders to two LGBTQ organizations — one national and one in Los Angeles — have announced they are stepping down, creating an opportunity for new talent at the top.

Lorri Jean, the longtime CEO of the Los Angeles LGBT Center, will retire in July 2022, the nonprofit said in a news release September 21.

Rea Carey, the executive director of the National LGBTQ Task Force, announced two days later that she was stepping down in early 2021.

The LA center has begun a search for Jean's successor.

The task force board announced that Kierra Johnson, a bisexual Black woman who has served as deputy executive director, will take over the top job in February.

Jean will have led the center for more than 25 years when she leaves. She stated that she has thought of retiring for a while.

"Right now, my primary focus is helping our center get through this pandemic and the relentless attacks by the Trump administration," she added. "In fact, the current challenges reinforce how important it is to help prepare this organization for a successful future."

Board co-chairs Susan Feniger and David Bailey wrote in a letter to donors that they have "put years of thought into preparing for this transition."

"We've been fortunate to have a strong leader for so long, and now we must prepare for the next chapter," they added.

To that end, the center plans a lengthy transition process. The new candidate is expected to start as executive director next May and will work with Jean and senior staff for just over a year before assuming the title of CEO.

The board noted the reason for this is the center's complexity — it provides many services, from health care to housing — and the transition will provide time for the new person to establish in-depth knowledge about the center's programs, and its multiple locations in Hollywood, South Los Angeles, Boyle Heights, Koreatown, and West Hollywood.

Along with the center's board of directors, national firm Koya Leadership Partners will help lead the search.

People can go to http://www.lalgbtcenter.org/ceosearch to learn more about the process.

Regarding the task force, Carey stated leading the progressive organization has been "a remarkable ride."

"We have faced down many obstacles together and made tangible progress for LGBTQ people and our families," she stated. "Together, we have fought to love who we want to love, for sexual freedom, to be free of violence and oppression in all its forms, to be seen, valued, and celebrated as fully human."

Carey added that Johnson is the best person to lead the task force going forward. Johnson stated that she is "thrilled to join the long legacy" of activist leaders at the organization.

"I am inspired by the multitudes of Black, Brown, and Indigenous people that have unapologetically claimed space, power, and influence to make change so desperately needed for our communities," Johnson stated.

GLBT history museum set to reopen
Just in time for LGBTQ History Month, the GLBT Historical Society Museum in the Castro will reopen to members Thursday, October 1, and to the public Saturday, October 3.

The small San Francisco museum has been closed for six months due to the pandemic.

The museum will be open on Tuesdays, Thursdays, and Saturdays from noon to 5 p.m. Staff stated in an email that new ticketing and visitor policies have been adopted to comply with city and state health regulations and ensure proper social distancing. Visitors must reserve their tickets online in advance; the museum will not be able to accommodate walk-ins at this time. Tickets will be timed at hourly intervals, with the number of visitors capped at five people per hour. Daily museum attendance will be limited to 25% of total capacity.

"The GLBT Historical Society Museum has implemented extensive cleaning procedures to ensure visitor safety, including hourly cleanings on open days and additional cleaning on days when the museum is closed," the email stated. "Hand-sanitizing stations are available for visitors, who are required to wear face coverings or masks at all times during their visit."

Ticket prices for the museum remain unchanged. General admission is $10; discounted admission for youth (ages 13 to 17), seniors (age 65 and over), students, teachers, active-duty military service members, and people with disabilities is $6; and admission is free for children (age 12 and under), GLBT Historical Society members, Supplemental Nutrition Assistance Program cardholders and North American Reciprocal Museum members. Thanks to a grant from the Bob Ross Foundation, admission on the first Tuesday of each month is free. Admission is also free for Bay Area residents on Saturdays.

The first stand-alone museum of LGBTQ history in the United States, the GLBT Historical Society Museum, at 4127 18th Street, opened its doors to the public in 2011 and welcomes over 20,000 visitors annually. For more information, visit http://www.glbthistory.org

Stryker heads to Mills College
Susan Stryker, a trans woman and leading academic in the field of transgender studies, has been hired as the new Barbara Lee Distinguished Chair in Women's Leadership at Mills College in Oakland.

The two-year faculty appointment is held jointly within the school's history and race and gender and sexuality studies departments and recognizes scholars who have exhibited thought leadership and courage in their fields, a news release stated.

Stryker received her Ph.D. from UC Berkeley and completed her postdoctoral research at Stanford. Prior to her position at Mills, Stryker held appointments at Harvard, Yale, UC Santa Cruz, and Simon Fraser University in British Columbia. Most recently, she served as professor emerita of gender and women's studies at the University of Arizona.

Also a longtime award-winning activist, author, and filmmaker, Stryker is co-founder of direct-action activist group Transgender Nation and a past executive director of the GLBT Historical Society. She was co-director, with Victor Silverman, of "Screaming Queens: The Riot at Compton's Cafeteria" (2005). More recently, she served as a consultant on Netflix's "Disclosure: Trans Lives Onscreen" directed by Sam Feder and produced by Laverne Cox. The film premiered on the streaming service earlier this year.

No registration is required.

Sister Roma of the Sisters of Perpetual Indulgence will serve as emcee, while Juanita MORE! and LadyRyan return as entertainment director and party DJ, respectively.

The center's silent auction is back, and people can start bidding now at https://app.galabid.com/soiree2020/items

The country club is a nonprofit sober space at 4058 18th Street in the heart of the LGBTQ neighborhood.

Usually known as the Harvest Feast, this year's event will be different, staff noted in an email sent to supporters. "Storytelling, interviews, and community testimonials will remind us that the CCC has been changing lives for 37 years," the email stated.

Drag artist Peaches Christ will provide entertainment, along with a "mystery" performer, according to the website.