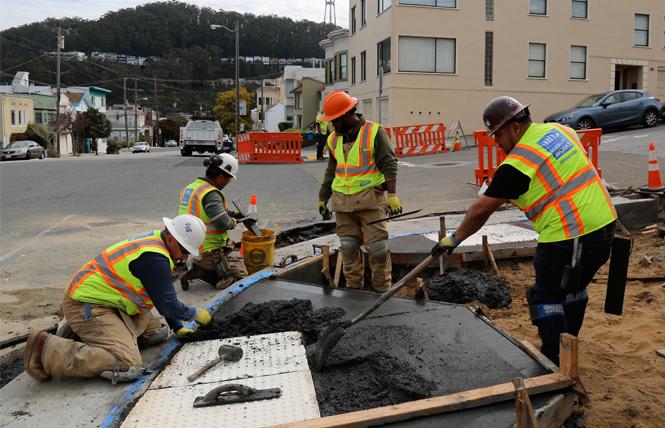 Proposition A will create jobs and allow the city to acquire land for housing. Photo: Courtesy Yes on A

We often find at least some San Francisco props worth rejecting, but not this year. Most involve revenue issues facing the city's billion-dollar budget deficit projections due to COVID-19; some deal with law enforcement reform and housing; and bond and regional transit measures are among the rest. We recommend a yes vote on all 13 SF measures. Unless otherwise noted, the propositions need 50% plus 1 of votes to pass.

Proposition A: Health and Homelessness, Parks, and Streets Bond. Yes. This is a $487.5 million bond for the acquisition of real property to house or provide services to people experiencing mental health challenges, substance use disorder, and/or homelessness. Additionally, it provides funds for improvements to neighborhood parks, playgrounds, community gardens, and recreation centers. Infrastructure repairs, such as to city streets, are also included. This was placed on the ballot by the mayor and Board of Supervisors to assist the city's economic recovery during the pandemic and spur job creation. It does not raise taxes and must be approved by 66 2/3% of voters. Vote YES on Prop A.

Proposition B: Department of Sanitation and Streets, Sanitation and Streets Commission, and Public Works Commission. Yes. Supervisor Matt Haney is behind this charter amendment in response to the criminal arrest that brought down former public works director Mohammed Nuru earlier this year. Haney represents the Tenderloin, which has been adversely affected by the pandemic and homelessness that ballooned during the lockdown. Haney points out that San Francisco Public Works does not have an oversight commission, a safeguard which may have prevented the use of street cleaning as a political perk or punishment, leaving streets filthy and residents and visitors disgusted. The point is to provide more supervision so Public Works does not operate unchecked. Additionally, Haney believes that a department dedicated to street and sidewalk cleaning would be more effective than being lost in a department with wide-ranging responsibilities. Cleaner streets and sanitary public spaces will help keep people healthier during and after the pandemic. In addition to a commission for Public Works, this new street cleaning department would have its own oversight commission that would set baseline standards, control spending, and investigate corruption. We do have some concerns with the cost, estimated by the controller to be between $2.5 million to $6 million annually, mostly due to new administrative expense and based on current service levels. But the choice is to live with current conditions or to focus on the singular goal of keeping streets and sidewalks cleaner. Vote YES on Prop B.

Proposition C: Removing Citizenship Requirements for Members of City Bodies. Yes. This charter amendment would greatly benefit all San Franciscans. Prop C would remove the requirements that city residents applying for boards and commissions be U.S. citizens and registered to vote. Instead, people will have to be San Francisco residents of legal voting age. This will open up the process so that more people are eligible to participate in civic government. The views of immigrants are vitally important for many city agencies, and they should have representation on those bodies. This would allow queer immigrants, for example, to be involved in the government of their adopted city. It will also expand the San Francisco law to align with California's existing law to allow all state residents, regardless of immigration status, to serve on California's local and state boards and commissions. Vote YES on Prop C.

Proposition D: Sheriff Oversight. Yes. A charter amendment, Prop D would primarily create an independent oversight board, which would appoint an inspector general to evaluate the work of the San Francisco Sheriff's Department, provide public transparency for investigations of misconduct and abuse within the department, develop recommendations for a use of force policy, and report on complaints filed against the department. It has widespread support, including District Attorney Chesa Boudin and Public Defender Mano Raju, and the full Board of Supervisors. Prop D will almost certainly pass given the prevailing mood to reevaluate law enforcement. Sheriff Paul Miyamoto respectfully disagrees. In a recent Zoom call to discuss the ballot measure, Miyamoto pointed out that the department has an internal affairs unit and had just signed a new agreement with the Department of Police Accountability that he said Prop D. duplicates. Supervisor Shamann Walton, the main proponent of Prop D, stated that public transparency is necessary, and that the city has paid out millions of dollars in settlements over the years. The San Francisco Police Department has a strong police commission that provides oversight. Similarly, we think independent oversight is better than a city department investigating another city department. Vote YES on Prop D.

Proposition E: Police Staffing. Yes. This charter amendment is timely. Due to city leaders' actions to move money out of the San Francisco Police Department in response to the protests over the summer calling for changes to policing, as well as the shifting nature of crime, SFPD and the police commission should be able to determine staffing levels of full duty sworn officers. Right now they cannot; the charter sets the number of full duty sworn officers at 1,971. Prop E, led by Board of Supervisors President Norman Yee, would require the police chief to provide a report to the commission describing the department's current number of full duty sworn officers and recommended staffing levels for same. The report would be required every two years and include a public hearing by the police commission on the issue. Prop E would also remove the requirement that the city maintain the number of sworn officers dedicated to neighborhood policing and patrol at least at the level in fiscal year 1993-94. There seems to be broad agreement between the mayor and supervisors that sworn officers should not be responding to mental health calls and other activities, and therefore fewer officers would be needed. Police officers have tough jobs and they should not be deployed as social workers, as Yee wrote in the ballot argument. Prop E should be passed so that SFPD and the police commission — not some arbitrary number set in the charter — can determine the appropriate staffing levels for sworn officers. Vote YES on Prop E.

Proposition F: Business Tax Overhaul. Yes. Yee is also the main sponsor of Prop F, which is a charter amendment that will blunt the economic challenges brought about by COVID-19. It would provide tax relief for sectors affected by COVID, including retail, restaurants, the arts, and manufacturing. It would eliminate the payroll tax and fully transition to the more equitable business tax system. It would increase the small business exemption ceiling for the gross receipts tax to $2 million. Other benefits include making available over $700 million for child care and early education, homelessness, and other essential services. This has support from the mayor and the board. Vote YES on Prop F.

Proposition G: Youth Voting in Local Elections. Yes. Called Vote16SF, Prop G would allow 16- and 17-year-olds to vote on all local races and city ballot measures. A charter amendment, it is similar to a measure in 2016 that was defeated by voters. Yee, a former school board member, supports the measure, which would increase voter participation. Supporters are right to point out that decisions made at the ballot box often impact 16- and 17-year-olds, from police reform to transportation, housing, and economic development. They should be able to have their voices heard by exercising their right to vote. Vote YES on Prop G.

Proposition H: Neighborhood Commercial Districts and City Permitting. Yes. This measure would help small businesses impacted by the pandemic to keep their doors open and employees on the job. It would allow more outdoor operations on sidewalks and parklets, permit cafes and restaurants to include workspaces, support new arts and nonprofit uses, help fill vacancies and keep commercial corridors vibrant, and streamline the permitting process from a year to a month. This alone is worth passing Prop H, as it would cut thousands of dollars in overhead costs for new merchants. Vote YES on Prop H.

Proposition I: Real Estate Transfer Tax. Yes. Supervisor Dean Preston is the main proponent of this measure, which would ask those who are selling property valued at $10 million or more to pay a higher tax when they sell their property. This would mostly affect large corporations or real estate trusts. The revenue will help those who have suffered the most during the pandemic, he explained, by providing much needed revenue to the city. (There is no change to the transfer tax for the average homeowner or property owner.) The progressive tax measure will generate much-needed emergency funds, especially with San Francisco facing a deficit of $1.7 billion due to the pandemic. Vote YES on Prop I

Proposition J: Parcel Tax for San Francisco Unified School District. Yes. The city passed a similar measure in 2018, but it's been stalled by an ongoing legal dispute because it did not pass with two-thirds of the vote. The city is collecting the parcel tax but is not spending the money. Mayor London Breed is seeking an end-run around this with Prop J, which would require a supermajority of 66 2/3% of the vote. It would replace the old proposition if it passes and the annual parcel tax would be $288, lower than the current $320. It would be effective July 1, 2021 through June 30, 2038. Prop J is expected to generate about $48 million a year for the cash-strapped school district, which is also facing a budget deficit due to COVID. Vote YES on Prop J.

Proposition L: Business Tax Based on Comparison of Top Executive's Pay to Employees' Pay. Yes. This would create an additional tax that would generally apply to all companies conducting business in the city for which the compensation of the business' highest-paid managerial employee compared to the median compensation paid to the business' employees based in the city exceeds 100:1. Known as the overpaid executive tax, it's expected to raise $140 million a year, which would allow the city to hire hundreds of nurses, doctors, and first responders. Corporations can avoid the tax by paying their executive less or raising their employees' wages. Vote YES on Prop L

Measure RR: Caltrain Sales Tax. Yes. Caltrain is an essential part of the Bay Area's transportation network. Voters in San Francisco, San Mateo, and Santa Clara counties must all approve this by 66 2/3%. It will save Caltrain from a shutdown by imposing a 30-year one-eighth-cent sales tax in the three counties. Caltrain, like BART and Muni, has had a significant decrease of passengers due to the pandemic. But once people start returning to work or travel, we don't want everyone using their cars again. Vote YES on Measure RR.