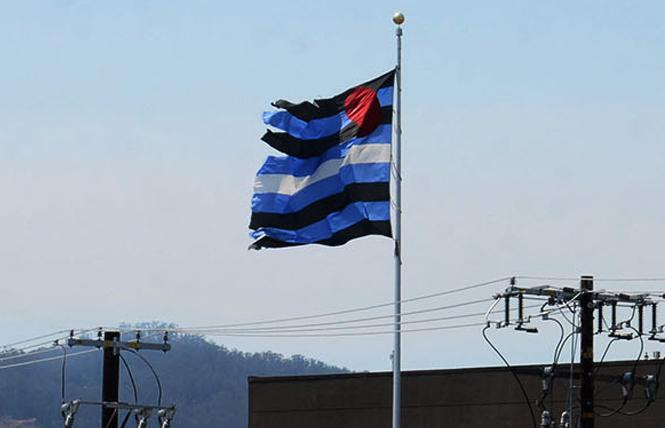 A new leather flag is on order to replace the tattered one flying over Eagle Plaza, but it won't be raised in time for the virtual Folsom Street Fair Sunday. Photo: Rick Gerharter

The answer is always "no" if you don't ask — but because Folsom Street Events took the plunge, Margaret Cho will host this year's eponymous street fair.

"We asked her," Angel Adeyoha, the queer and nonbinary executive director of Folsom Street Events, told the Bay Area Reporter in a recent interview. "The situation we found ourselves in with the pandemic has made a lot of the usual things very different. People don't have to travel and people are very involved in supporting our community when we have faced such a financial hit, when the primary event isn't happening in-person."

Everyone from enthusiasts to the curious can watch the affair from 10:45 a.m. to 6 p.m. (Pacific Time) Sunday, September 27, at the Folsom Street Events website.

This isn't Adeyoha's first virtual event. After they took over the nonprofit in the early days of the pandemic in April, it put on a virtual Up Your Alley Fair in July.

"It was — for all the metrics — very successful," Adeyoha said of the event also known as the Dore Alley fair. "We had 3,000 viewers: some folks who hung out all day long [and] a great group for vendors."

For the Folsom fair, the organization's marquee event, Adeyoha and their team hope to expand upon that success.

"The difference about Folsom is for Dore we don't book a lot of entertainment — we have some DJs and go-go dancers," Adeyoha said. "Folsom has always been more of a production, which will be no different for the virtual aspect."

Adeyoha said that while there is plenty of Bay Area representation, the virtual format has expanded the breadth of participation. The event will feature live music from Dorian Electra, Holly Miranda, Big Joanie, and Danny Denial, as well as beats spun by 10 DJs.

There will be an all-day dance music stream accompanying the main event.

The fair will begin with a screening of the documentary "Folsom Forever," which covers the history of the fair.

At noon, the live portion will kick-off with Cho, joined by Alotta Boutté and Lance Holman as emcees. 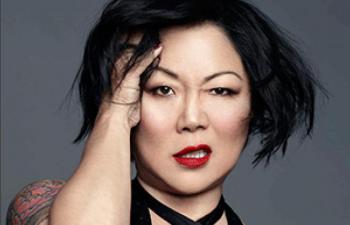 "[They] will take us through a journey of all this incredible content formed by our community," Adeyoha said, which will include "14 different scenes where people can join in different community experiences. There will be classes, workshops, social time, and cruising time."

Adeyoha said that Folsom Street Events is trying to raise $25,000 this year "to be able to continue, essentially: paying rent and keeping our organization intact." While the fair will be, as always, free, participants will still be asked to donate virtually. The Sisters of Perpetual Indulgence will be assisting with donation collection, and if people donate at least $15 or more, they will receive 20% off all merchandise. For a $35 donation, people will receive a special care package.

After the fair ends, participants are asked to join in the Bawdy Storytelling after party from 7 to 9:30 p.m.

This is not the first iteration of Bawdy Storytelling, according to Dixie De La Tour, the event's founder and emcee.

De La Tour, who identifies as a bisexual sexual folklorist, said that "this has been the original sex storytelling series that has gotten all the awards." (Indeed, Bawdy Storytelling won an SFist award for Best Storytelling Show. There is also a podcast.)

"They're going to give people a short dinner break and then we'll start at 7 p.m.," De La Tour said. "Some folks from Folsom loved what we were doing and asked us to be the after party."

"I do have people in other countries who ask me 'I'm new to kink' and having a podcast, I became a resource," De La Tour said. "I've been directing people to whatever Folsom is creating, especially with Margaret Cho as the host, which is mind-blowing."

De La Tour said people who pay $69 to be an "exhibitionist" at the event will receive a custom cozy, a butt plug, a face mask, and a bottle of Uberlube.

"A butt plug is expensive so $69 is a pretty good deal, especially since Uberlube costs $32," De La Tour noted.

Adeyoha said this year's events are not to be missed, even if it's not the same sweaty, leather, sun-drenched scene attendees are used to.

"This allows for a wider pool of talent. I think it's going to be amazing, progressive, and astoundingly cool content," Adeyoha said. "I can't wait to see it in action."