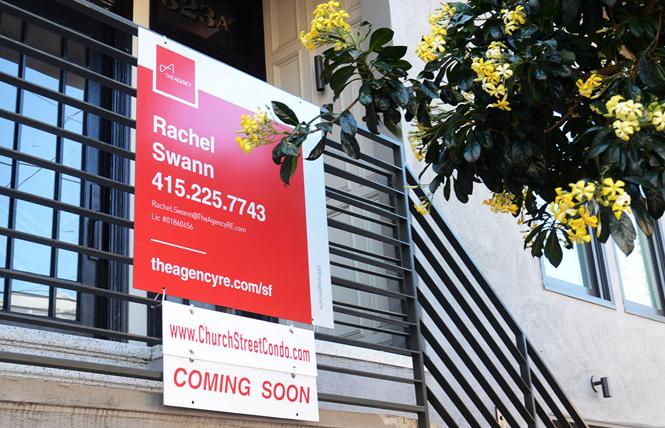 A flat was for sale on Church Street in May. Photo: Rick Gerharter

Housing, one of the most salient issues in California, is a subject of three statewide propositions on the November 3 ballot.

Commercial property tax increase
In 1978, California voters passed Prop 13, which limited property taxes for the owners of both homes and commercial spaces.

The result was a drastic reduction in property taxes, which critics have argued has hurt the state's schools, which depend on that revenue. Prop 15 is known as the "split roll" fix, and would repeal the 1978 commercial property tax caps for properties worth over $3 million. It could generate billions of dollars in tax revenue. It does not apply to residential property.

"We believe this is very important because it is a critical step to making sure every child has a safe and supportive school," Samuel Garrett-Pate, the communications director for EQCA, said in a phone interview with the Bay Area Reporter. "LGBTQ students face more risks at school and our teachers and staff are on the frontlines of protecting our LGBTQ students, but both are underfunded because of these unfair tax laws. They need the support and funding to support LGBTQ+ people. And this would only apply to commercial, not residential, property."

Edward Wright, chair of the Milk club political action committee, told the B.A.R. that Prop 15 was the only proposition "pre-endorsed" by the club.

"We felt very strongly about coming out in support of it. It is one of our top priorities," Wright said. "Reform to Prop 13 is long overdue and this is a common sense proposition to ask Disney, Chevron, and other big companies in our state to pay their fair share of property taxes."

David Fujimoto, a gay man who is co-chair of the Alice club, said that Prop 15 is "an overdue and much needed change."

Assemblyman David Chiu (D), whose district covers about 60% of San Francisco, mostly in the eastern half, said he, too, was supportive.

"I've always stood for Prop 13 reform. Prop 13 has had so many negative consequences for our state, from incentivizing commercial development over residential development, to distorting the real estate market," Chiu said. "Since Prop 13 passed we have massively underfunded our schools."

"I support it because large commercial properties should not be part of Prop 13," Wiener said. "When Prop 13 was passed, the rationale was to protect homeowners of modest means from creeping property taxes — not the Transamerica Pyramid or the Bank of America building [now referred to by just its address, 555 California Street]. It makes no sense to cap property taxes on large commercial buildings and it's very unfair because I'll guarantee the Salesforce Tower is paying an enormous property tax bill, more than [555 California]. It's an idea whose time has come."

There is little daylight between Wiener and his opponent in the state Senate race, queer educator and democratic socialist Jackie Fielder, on this issue, though she emphasized aid to schools in her remarks.

"We have to pass Prop 15 to get school funding back to where it needs to be, but that can't be the bare minimum," Fielder said. "We have to do more to fund our schools."

Fielder said she wasn't sure if Prop 13 should be completely repealed. Wiener said he doesn't think it's politically possible to repeal Prop 13's tax caps on residential property. Prop 13 has long been known as the "third rail" of California politics.

Sonja Trauss, an activist for more housing who is the president of YIMBY Law and who unsuccessfully ran for the San Francisco Board of Supervisors in District 6 in 2018 and is now in Oakland, had good and bad things to say about Prop 15. (Trauss wouldn't endorse or reject any particular proposition at the time of her interview.)

"[Prop] 15 is good and bad. It's good because it'll tax revenues from those who can afford it — commercial property owners," Trauss told the B.A.R. "The downside is cities, especially small cities, already believe that building residential is a net loss on the budget compared to commercial. If commercial properties are taxed at a higher rate than residential, then there'll be an incentive for councils to zone for more commercial."

Prop 15 is opposed by the Howard Jarvis Taxpayers Association. Jarvis was a co-author of Prop 13, along with the late Paul Gann.

"It's a huge tax increase," Susan Shelley, vice president of the association, told the B.A.R. "California taxes are high enough. This would be brutal for businesses, job creation, and supermarkets. It would be extremely burdensome." 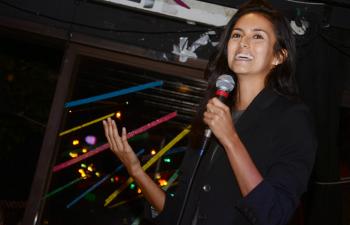 Prop 19 is supported by the Alice club and the California Democratic Party. It is opposed by the Howard Jarvis Taxpayers Association.

Equality California, the Milk club, and the California Republican Party did not take positions.

The Milk club did not reach a consensus on this proposition, Wright said. Although club members agreed about increased funding for wildfire victims, others were concerned about its effects on property tax transfers.

Fujimoto of the Alice club said that Prop 19 should be supported for its benefits to wildfire victims.

"Alice supports Proposition 19 as a way to protect wildfire victims from becoming financially burdened during their time of need," Fujimoto stated. "This measure expands protections to victims of wildfires by allowing them to pay the same property tax on a new primary residence as the property tax they had for their prior primary residence. It also establishes the California Fire Response Fund to bolster the state's fire suppression efforts, the need for which has been underscored by the recent devastating fires."

Chiu said he has "real concerns with this measure because it is an expansion and continuation of Prop 13."

"I think we should repeal all of Prop 13," Chiu said. "We should scrap it and look anew at the issue."

Wiener and Fielder both support Prop 19.

"I know that some of the funding will be used for wildfire defense, and as we see right now, we have a deep need for that," Fielder said. (Fielder's B.A.R. interview was on August 28, as smoke from multiple fires inundated much of the Bay Area.)

Trauss also had good things to say about Prop 19 because it will expand the portability of property tax rates.

"The Realtors understand some people want to downsize but can't afford to, even with the housing shortage," Trauss said. "We want people to be able to move where they want to. That they can't due to the tax code is outrageous. Some people live in a house for six people and don't even want to."

The Howard Jarvis group said the measure is, on balance, a tax increase.

"It expands the existing tax bill for people who want to move," Shelley said. "Currently you can move once, if you stay in select counties or move to a county that accepts a transfer. This would expand it three times and anywhere in the state and you can move to a home with a higher value. We don't have a problem with portability but the problem here is the repeal of the parent-child transfer exclusion of Proposition 58 from 1986. ... Prop 58 says when property is transferred between parents and children it's excluded from reassessments of value and up to $1 million of assessed value of other properties are also protected from reassessment.

"It [Prop 19] functions like an estate tax," Shelley explained. "A lot of small businesses would be lost because they can't afford to pay 1% of the reassessed property values. This is going to cost people millions of dollars."

Wiener said that it's unfair people can keep a low property tax when they inherit investment property.

"What Prop 19 does is it allows, if you live on a property, to inherit the lower tax but if it's an investment property, you get reassessed," Wiener said. "It's very unfortunate for taxpayers to be subsidizing someone who doesn't live on the property." 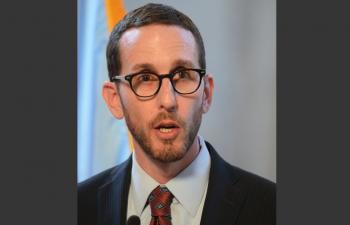 Rent control back on ballot
Prop 21 returns the issue of rent control to the ballot, but in a different way than 2018's Prop 10.

"The previous iteration would have allowed communities to put rent control on brand new properties," Trauss said. "Prop 21 is much more functional."

The debate around rent control has often centered around the question of whether greater rent control would disincentivize the building of new units — which has for decades made for otherwise-strange political bedfellows.

Prop 21 is supported by the Milk club, the Alice club, and the California Democratic Party. It is opposed by the California Republican Party and the Howard Jarvis Taxpayers Association. Equality California did not take a position.

Fujimoto stated Prop 21 is in line with the Alice club's policy platform, which supports expanding rent control throughout the state.

"Given the historic housing crisis we are facing, particularly in light of the devastating effects of COVID-19, this measure gives local governments the tools they need to prevent homelessness, displacement, and the worsening of the housing crisis," he stated.

Chiu, who represents one of the most densely populated districts in the state, also supports the measure.

"I've been a longtime champion for tenants," Chiu said. "Particularly during this time period, we need to ensure we are working together to protect tenants and keep them in their homes."

Wiener has been criticized for his support for additional housing. He said he does not know how he will vote on Prop 21, but likes the rolling start-date for rent control.

"I support the 15-year rolling window for rent control," Wiener said. "A rolling transition into rent control makes sense to me."

Fielder said she is a strong supporter of the measure.

"This is something I support 110%, especially right now, during a pandemic," she said. "Tenants need to know they can afford to shelter-in-place and that's the best way to prevent the spread of the [COVID-19] virus."

Trauss wobbled on whether to support Prop 10 two years ago. While she praised Prop 21 as an improvement over Prop 10, she wondered why it doesn't go further.

"Neither one gives you rent control," Trauss said. "I feel if it passes it'd be good for California but the big problem is neither [Prop 21 nor Prop 10] gives anyone rent control. Why aren't they asking for a statewide rent control rule? Why are they putting it in the hands of local governments, particularly in small towns without the reputation of being progressive? For example, there's rent control in Los Angeles but not in much of LA County."

The AIDS Healthcare Foundation has provided almost all of the funding for Prop 21 and did not respond to an interview request.

Wiener has long been critical of AHF, which sued him and the city when he was a supervisor over formula retail legislation.

"Prop 21 would allow rent boards to create radical regulations that would cause a reduction in the amount of housing," Shelley said. "Rent control creates less housing. You see less construction. It makes it worse."