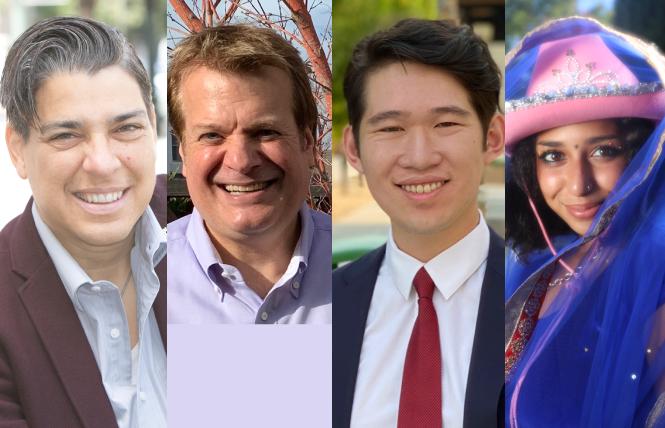 The East Bay has several races in which LGBTQ candidates are running. Questionnaires were sent to the out candidates we are aware of, and are making the following endorsements based on the candidates' responses.

Oakland City Council At-Large
Rebecca Kaplan
Oakland City Councilwoman Rebecca Kaplan is our choice in this race. First elected to the council in 2008, Kaplan, who identifies as a butch lesbian queer, is currently president of the eight-member body and has built a solid record not only on behalf of LGBTQ constituents, but all Oaklanders. She changed the city's youth funding distributions so that queer youth programs are included; abolished old discriminatory laws that were on the books when she was elected — such as one making "cross dressing" an illegal act — and worked to get other LGBTQ people appointed to leadership positions on boards and commissions. "I worked with community partners to bring transgender awareness and trainings to the Oakland Police Department, and to respond to negative stereotyping that has taken place," she wrote. She helped relaunch Oakland's Pride festival and brought a resolution to the council on HIV/AIDS that supported hanging panels of the AIDS Memorial Quilt at City Hall during this summer's virtual International AIDS Conference.

The yearslong effort to reform the Oakland Police Department is receiving more scrutiny this year due to countrywide protests against the disproportionate killing of Black people by police. Kaplan has long supported holding OPD to account but much work remains. As she noted, "Policing is the area of Oakland government which received the lowest score on the equity indicators report and requires substantial change. True public safety requires providing the right response for the job, and not assuming that sending someone with a gun is the solution to every problem." The City Council passed Kaplan's proposals to launch a civilian mental health response as an alternative to OPD, and to civilianize the special events function, taking it away from the department. "This will save the community millions of dollars, as well as providing more effective response," she wrote.

The council also authored a November ballot measure to ensure the independence of the Oakland Police Commission and to provide oversight and accountability. Perhaps most significantly, Kaplan wrote, the council has passed a direction to plan for changing how traffic enforcement is handled, "to allow that, and other functions, to be shifted from police and also handled more effectively." This is key to police reform because traffic stops can escalate into police shootings. No one should become a potential victim of a police shooting because they were pulled over for an infraction, such as expired tags or a broken tail light. "Some of the horrifying cases of police misconduct that have occurred, including killings of unarmed, mostly Black people, have started with a traffic stop," Kaplan wrote. "Traffic stops are a large percentage of the public's experience of being detained by police, and they are substantially disproportionately targeted at African Americans. Basic traffic enforcement (including to prevent speeding) should be civilianized and provided by alternative methods."

Regarding Oakland's housing crisis, Kaplan supports using more public land to build and preserve affordable housing. She is a strong supporter of transit-oriented development on or near BART property, both to protect the environment and create jobs. "I have been a leader in seeking common sense development rules that allow for density on our transit corridors while eliminating unreasonable barriers to development in the right locations," she wrote. "My goal for Oakland's overall vision for development is centered on creating thriving livable transit-oriented communities."

In response to the coronavirus pandemic, Kaplan wrote that she included funding in the council's mid-cycle budget revision for ethnic chambers of commerce to assist small local businesses, as well as community nonprofits that direct aid to vulnerable Black, Brown, and LGBTQ+ people. She helped fight for COVID testing centers in East Oakland, which has been pummeled by the virus, as well as provide personal protective equipment and free Wi-Fi.

Kaplan faces perhaps her most significant challenger in gay Black small business owner Derreck Johnson. And while we were impressed with Johnson's responses, Kaplan has a record of accomplishment and effective leadership that comes from her years of public service. We hope this race has seasoned Johnson to attempt another council seat in the future; a diverse city like Oakland can benefit from more LGBTQ representation.

In this race, Oakland voters should return Kaplan to City Hall for another term.

Alameda City Council: Jim Oddie
A gay man who came out two years ago, Alameda City Councilman Jim Oddie was first elected in 2014 and then in 2018 to a two-year term. He is seeking a four-year term this year. He wrote that he has a strong record of improving emergency operations, making significant investments in safe streets for all, and "securing landmark advances in affordable housing, tenant protections, and compassionate solutions for our unhoused neighbors."

Regarding policing, Oddie wrote that the City Council directed the city manager to appoint a task force comprised of members of Black/Indigenous people of color to address the future of policing and the issue of systemic racism in Alameda. The island city does indeed have a troubled past, and Oddie said that he expects the task force to develop recommendations in five areas: unbundling police services; reviewing police policies and procedures; strengthening accountability and oversight; reviewing laws that criminalize survival; and addressing systemic racism. "As far as my opinion, there are functions that should be realigned from police to alternate responders," he wrote.

Although Alameda does not have a BART station, Oddie supports affordable housing near the stations and on BART property. The City Council is working on the lack of middle-income housing, especially around Alameda Point. He said the city has made it easier for property owners to add accessory dwelling units to their properties. Oddie supports the repeal (Measure A on the November ballot) of an article in the city charter that prevents the building of multi-family units in the city.

Oddie has been an effective city councilman and he should be returned for a full term.

Fremont mayor: Justin Sha
Justin Sha was in the news recently because he was mistaken about whether he could state he was a lawyer in campaign materials when he sought a Fremont City Council seat two years ago. While he graduated from law school and passed the bar exam, he is in the process of becoming a licensed attorney and does not yet practice law. Sha, 27, who identifies as gay and queer, acknowledged the error and we think voters should give him the benefit of the doubt, considering his opponent. As he noted in his questionnaire, he is running against an incumbent, Mayor Lily Mei, who voted against Harvey Milk Day when she was on the school board and is aligned with a right-wing city council member who spearheaded a 3-2 decision to remove sex education from Fremont schools rather than comply with the California Healthy School Act. The city of Fremont deserves better.

"I have consistently fought for LGBTQ issues since coming out in college," he wrote, adding that he's been active in the Gay Asian Pacific Alliance and other LGBTQ organizations.

Sha noted that one of the main reasons he's running for mayor is his disappointment in the way local Black Lives Matter demonstrations were handled by the incumbent. Also, the City Council voted unanimously to increase the police budget. "We must work to address institutional bias in our communities," Sha wrote, "and I believe that that requires a genuine and open community conversation and dialogue that is attuned to the cultural nuances of the community." He said that Fremont's population is over 55% Asian and over 50% are immigrants. He said an "open and honest dialogue" is needed, including "honest reflection" by the police department. Sha supports reallocating funding so that police do not have to be the first responders to homelessness and mental health calls.

Sha is a young candidate, but one we think would positively effect change in Fremont.

San Ramon City Council
District 3: Sameera Rajwade
Sameera Rajwade identifies as a nonbinary bisexual person and is a young queer person of color. At 21, they would be one of the youngest electeds in the region. "With younger representation being scarce in our public office, we see a divide between the opinions of older versus younger voters," they wrote. "I've decided to inspire Americans who are politically active to have a voice in politics."

Rajwade has long called San Ramon home, having grown up and attended public schools there. "My knowledge on the inner workings and issues of my community makes me qualified to be a public official," they stated.

Rajwade wrote that the San Ramon Police Department "has no legitimate form of accountability for racism or prejudice, so I plan to create a checks and balance system between community and police to ensure our LGBTQ and BIPOC communities are safe." Community reinvestment and reallocation of police resources would be their first priority if elected, directing those funds into affordable public housing. Rajwade noted that many public school teachers in San Ramon can't afford to live there and that this needs to be examined and addressed.

Rajwade supports affordable housing being built near public transportation. "But I also believe that housing is a human right, and, no matter what or where the location is, housing should be affordable not only to those with plenty of resources."

Overall, Rajwade would be a strong addition to a suburban City Council, and real-world, practical experience will season their enthusiasm for public service. Voters should consider giving young people the opportunity to serve and become mature community leaders.