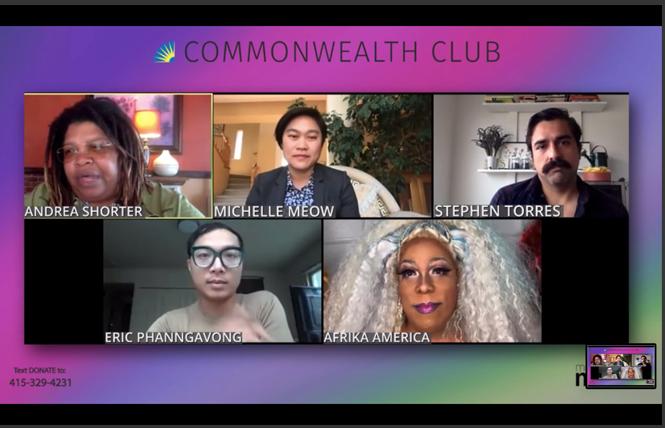 Panelists talked about racism in the Castro during a Commonwealth Club program. Photo: Screengrab via Zoom

After a long history of racial discrimination, the problem still plagues the Castro, said a panel of queer people of color during a Zoom broadcast sponsored by the Commonwealth Club and San Francisco Pride.

Streamed on September 2, the panel was moderated by Michelle Meow, producer and host of "The Michelle Meow Show" that is part of the Commonwealth Club's programming and is broadcast on KBCW. She is also a past president of the SF Pride board.

Andrea Shorter, a member of the San Francisco Commission on the Status of Women and a co-founder of ...And Castro for All, said the Castro's identity as a gay enclave began in the late 1960s as gay people moved in, finding affordable housing after many of the working class Irish and Italian residents left Eureka Valley for the suburbs or other neighborhoods in the city.

Stephen Torres, a bartender at Twin Peaks Tavern at Castro and Market streets, said that most of the bars were Irish until Twin Peaks opened in 1972 to serve the gay community. At that time, bars in the neighborhood had "no touch" policies, forbidding patrons to kiss or hold hands. The women who opened Twin Peaks, he said, made a conscious decision to have large plate glass windows, "dispensing with the dark hidden bars" so common then.

While growing up in San Francisco, Afrika America, a drag performer and social justice activist, remembers looking into Twin Peaks, finding it "tantalizing and terrifying" at the same time. From the beginning, the Castro attracted white gay men; Black gay men more often lived in the Haight or near Polk Street, Afrika America said.

In the 1980s, Afrika America said that the Pendulum catered to Blacks. Twin Peaks attracted an older crowd and the long-closed Mike's Night Gallery was the "naughty" place. When lesbians showed up in Castro bars, patrons often wondered out loud what "they were doing here," Afrika America said. Drag was confined to Polk Street or South of Market.

Eric Phanngavong, a hospitality events manager, said for him "the Pendulum was the bar of choice," with its great music and the chance to see people who looked like himself. There were always examples of "acts of micro aggressions" in the bars, although many people don't want to admit it or discuss it.

Discrimination is "very real," Shorter concurred. "It's part of the history (of the neighborhood)" and "goes back to what people expect of the Castro." There was a time, she said, "and it's not entirely gone" where the neighborhood was a "white man's playground" where everyone else is "background or has an ancillary role."

Shorter recalled the mid-2000s boycott at Badlands over allegations of racism.

Natali later opened Toad Hall on the site of what had been the Pendulum.

In an email June 6, after the Badlands issue was brought up at a Black Lives Matter protest in Jane Warner Plaza, Natali wrote that the allegations "were found without merit and were dropped."

Torres said the influx of gay men turned the "heteronormative culture (in the neighborhood) on its head" but there were few, if any, Black or Brown faces in the Castro. Torres said he moved here from Southern California and was "aghast at how racist" the neighborhood was. In a bar, people would ask about a person's background, specifically where their parents were from, he said.

Racism isn't confined to the Castro, said Afrika America, who transferred to Washington High School, where a counselor said they didn't seem suitable for the program for gifted students, although they had been in such a program in junior high school.

An audience member asked the panelists for recommendations on what they could do to make the neighborhood more inclusive.

"You've got to start the conversation and address what's happening," he said. "Sometimes white people don't want to get involved, and think it's up to people of color to speak up, which is not true."

Torres, who has worked in bars on and off for 20 years, said the queer bar industry is rife with abuse. Employees are typically hired on an "at will" basis and if you're a person of color, "you may not want to make waves" by complaining.

"It's up to our white allies" to speak up if they notice racist language or behavior, he said.

Meow pointed out that if people of color are unable to rent or own property in the Castro, "how inclusive can we be?" In response, Shorter said that while people may not be able to afford to own a home or buy a business, "we're investors too."

"Our presence is what defines the values" of the rainbow flag and other monuments recognizing people of color who have contributed to the city, she added.

Queer people of color can't obtain political influence on their own, said Shorter. "We've got to reach out and build coalitions with other groups of Black, Latin, and Asian people."

Torres said that the Bay Area Queer Nightlife Coalition has uncovered problems of racism in some LGBT bars. (The Bay Area Reporter recently reported on a four-hour town hall the coalition held earlier this summer.)

"If they want to be part of our future, they've got to change," he said. "We have the power to change direction."