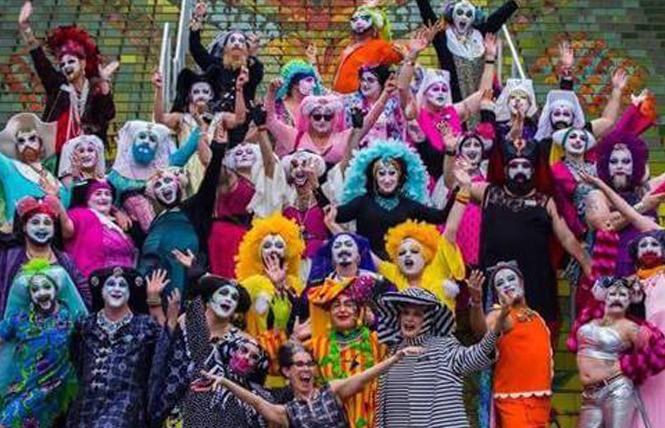 Creating a drag laureate for San Francisco, like perhaps a member of the Sisters of Perpetual Indulgence, is one of the proposals in the city's revised LGBTQ+ Cultural Heritage Strategy. Photo: Courtesy Facebook

Cities across the country have designated poet laureates, so why not name a drag laureate? Creating such a position in San Francisco is just one idea local officials are exploring in order to preserve the city's LGBTQ culture.

Having a citywide ambassador of drag is among the nearly 50 suggestions included in San Francisco's groundbreaking LGBTQ+ Cultural Heritage Strategy, a revised version of which was released this month. The proposals run the gamut from supporting the city's trio of LGBTQ cultural districts; constructing the country's first large-scale, freestanding LGBTQ museum; addressing the lack of affordable housing for LGBTQ artists, seniors, and youth; and offering financial support to queer-owned businesses and arts institutions.

"I love the idea of lifting up leadership of the city with a drag laureate," said Clair Farley, a transgender woman who is director of the city's Office of Transgender Initiatives. "We have to be innovative about how do we preserve San Francisco culture. With continued gentrification and issues with racism, how do we make sure San Francisco stays queer?"

The cost to implement the multitude of initiatives in the 56-page document is estimated to be at least $10.2 to $15.7 million. The price tag to pay for the top 10 prioritized steps called for in the document is pegged to cost anywhere from $1.3 to $2 million.

"All of these recommendations are designed to support and enhance LGBTQ culture in San Francisco and protect the resources we have, the people we have, the businesses we have, and the cultural resources we have," said Terry Beswick, executive director of the GLBT Historical Society who helped lead the task force for the cultural strategy. "At this point all of those are under threat more than they were when we started working on this."

The idea for developing the strategy came from concerns about the loss of LGBTQ bars, businesses, and entertainment venues throughout the city. It prompted calls for the creation of an overall plan to address the de-gayification of San Francisco, championed by gay former supervisor Scott Wiener, now a state senator.

Work on the strategy began three years ago, with the city's planning department working with community members to craft it. The city's historic preservation commission approved a draft version of the document in 2018.

But further work on it was bogged down by the need to coordinate responses from numerous city departments. It was expected the strategy would be adopted earlier this year, but the novel coronavirus outbreak disrupted work on it.

As the revised version of the strategy now notes, "in light of the economic, cultural, and human challenges being experienced across San Francisco and around the world in 2020 as the result of the COVID-19 pandemic, LGBTQ+ culture and heritage is at even greater risk than when the strategy work began."

While the idea for creating both a city drag laureate and a city trans laureate had been listed in small type in a chart in the earlier version of the strategy, the revised document now highlights the drag laureate concept in the "Culture" section.

A spokesman for Mayor London Breed did not respond to the B.A.R.'s questions on if she would name such an individual in 2021. Gay District 8 Supervisor Rafael Mandelman, the lone LGBTQ community member on the board, enthusiastically supported the idea when asked about it by the B.A.R.

Apart from a few revisions to the various ideas the strategy calls on city and community leaders to implement, the most significant change made to it from the earlier draft version is the inclusion of the estimated cost projections for each of the 49 initiatives.

For instance, expanding the staff and scope of Farley's office to oversee LGBTQ programs, not just ones aimed at the city's transgender community, is pegged to cost at least $501,000. Conducting a needs assessment for the LGBTQ community and enhanced cultural humility training for city employees and contractors are both estimated to cost $50,000.

Support for the city's three established LGBTQ cultural districts, in the Tenderloin, the Castro, and South of Market neighborhoods, is pegged at between $251,000 to $500,000. Forming an LGBTQ historic preservation advocacy group is estimated to cost $50,000.

In terms of the proposed LGBTQ museum, the strategy suggests earmarking $51,000 to $250,000 toward creating a business plan for the institution and at least $501,000 toward the purchase of a site for it. Another allocation of at least $501,000 "would ensure adequate funding" for operation of the museum.

Funding uncertain
With the city forecasting a $1.7 billion deficit over the next two fiscal years due to the health crisis, LGBTQ advocates and city officials acknowledge it will be tough to secure funding for most of the initiatives called for in the strategy. Those that address issues brought into even starker relief by the pandemic, such as the challenges LGBTQ artists, nonprofits, and business owners were already facing in San Francisco, have a better chance of moving forward, they predicted.

"Even if it had come out a few months ago, the only recommendations in this report which would have been included in the budget would be those that in some way are strengthening the city's response to COVID," noted Beswick. "I think across the board right now, particularly with arts and culture organizations, we are just hoping with the budget process to hold the line and not go backwards in terms of our city funding."

Wednesday the city announced that 25 LGBTQ-serving arts and cultural organizations would receive a portion of $12.78 million in Grants for the Arts being dispersed to 227 groups in the 2021 fiscal year.

"The arts are a vitally important economic industry, generating revenue, creating jobs, attracting tourists, and strengthening communities," stated Matthew Goudeau, a gay man who is director of Grants for the Arts.

The GLBT Historical Society is receiving $67,520. Beswick told the B.A.R. that the agency also received a $50,000 grant from the San Francisco Arts Commission it would use to hire a person to launch a major gifts campaign, including a capital campaign for its planned museum project.

Of the 49 listed initiatives in the LGBTQ cultural strategy, 23 have received some form of funding or support to get underway, according to the document. For instance, under the document's "Opportunity" section, it calls for ongoing support for the transitional transgender housing program known as Our Trans Home SF.

Breed is seeking $2 million in the budget for the fiscal year that begins October 1 to maintain and expand the program, which offers transgender people at risk of homelessness short-term leases in an apartment building near Chinatown. As the B.A.R. reported online last week, the program is expecting to add another building with capacity to house 14 individuals.

The mayor is also seeking $2 million over the 2020-21 and 2021-22 fiscal years for an HIV/AIDS rent subsidy program that was launched late last year. The Board of Supervisors is now revising the mayor's balanced budget proposal, with the budget to be finalized sometime in September.

Mandelman told the B.A.R. it would be years before the city is financially able to fully implement the cultural strategy's recommendations. In the meantime, he hoped other sources of funding could be sought for the various proposals it includes.

"The issues that gave rise to this are so much more acute now than they were when work on the strategy started. The terrible other reality is public resources to address those needs are so reduced right now, so we have a problem," said Mandelman, who has yet to be updated by planning staff on the cultural strategy.

The planning commission could take it up as soon as September, with it then being heard by the Board of Supervisors. A planning department spokeswoman told the B.A.R. there is no date yet for the hearing before the oversight body.

"The really big question for us, just like it is every year, now more than ever is what are the city's priorities?" asked Beswick. "And, in light of COVID, what kind of city do we want to be after the pandemic is over?"

Farley told the B.A.R. she would be looking at opportunities in the next fiscal year budget to fund some of the suggested initiatives in the strategy. Those aimed at the health and wellness of the LGBTQ community, she predicted, would take top priority due to the health crisis.

"The report being released is really important," said Farley. "It shows all the incredible work the community did on it. But now we have to reevaluate our priorities moving forward considering the landscape."

The revised cultural strategy can be downloaded at https://sfplanning.org/project/lgbtq-cultural-heritage-strategy