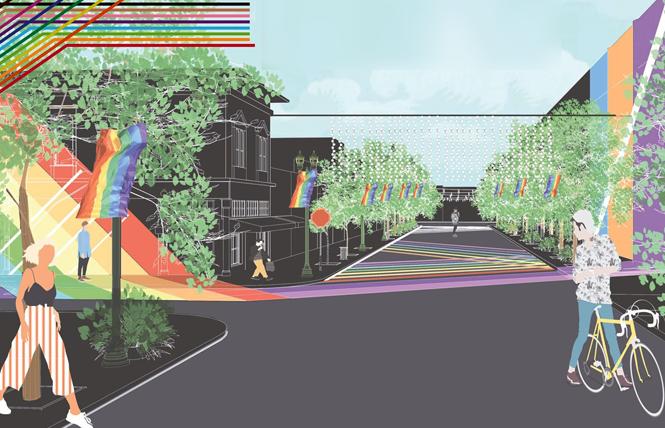 Silicon Valley Pride kicks off Saturday, August 29, with an all-virtual line-up of events, some of which are viewable through the Pride organization's Facebook, YouTube, and Twitch accounts, and some of which celebrants can participate in via Zoom.

There is also an effort underway to reimagine Post Street in San Jose as a space for an LGBTQ inclusive district. While not part of the official Silicon Valley Pride, city officials and others will hold a news conference Friday, August 28, at 1 p.m. Post Street is home to Splash San Jose, an LGBTQ nightclub.

This year's theme is "Equality Rising." The line-up was quietly placed on the Pride organization's website two weeks ago, according to Saldy Suriben, a gay man who is the chief marketing officer for Silicon Valley Pride, adding that the schedule was a collaborative process among all members of the organization's board of directors.

"Like many Pride organizations, the event is virtual because of the pandemic, but we feel that Pride is not canceled and we need to celebrate our identity as the LGBTQ community and commemorate the people who fought for our rights, especially queer trans women such as Marsha P. Johnson and Sylvia Rivera," Suriben said in a phone call with the Bay Area Reporter August 24.

Johnson and Rivera were trailblazing activists at the time of the 1969 Stonewall riots in Manhattan's Greenwich Village, which kicked off the modern movement for LGBTQ rights in the United States. Johnson died in 1992 and Rivera passed away in 2002.

When Silicon Valley Pride announced it was going virtual, it had asked members of the community to submit minute-long videos about their LGBTQ Pride. A virtual parade at 10 a.m. Sunday will showcase these.

"It's a mix of video submissions from the community and also past in-person parade video content," Suriben said.

The main stage from 2:30 to 7:30 p.m. Sunday will "focus on LGBTQ community artists," Suriben said, including the Latinx singer-songwriter San Cha. There will not be a single headliner, however.

Some of the events, such as a drag brunch Sunday at 11 a.m., the Queer Cultural Cabaret Saturday at 2 p.m. and the Pride Dance Party Saturday at 9 p.m., will only occur on Zoom so that the organization can avoid potential copyright issues.

The brunch will be hosted by drag artists Alpha Andromeda and Jacky Layshun. The Pride Dance Party will be solely hosted by DJ AX, who has spun at the event in the past.

A family garden event will occur for three hours, beginning Saturday at 10 a.m.

"Family garden consists of what you'd normally see at our in-person festival — arts and crafts and storytime for kids," Suriben said. It will be presented in coordination with Silicon Valley Pride partners such as the San Jose Public Library and Cosplay with Pride.

Pride begins Saturday at 9:30 a.m. with a workout regime from Hank Dean, an out San Jose fitness business owner.

"A mix of queer and trans performers" will be present for the queer trans stage at 6:30 p.m. Saturday, Suriben said, which will include Jahaira Fajardo and Angelica Medina of Fresh Meat Productions.

The Hey Girl stage on Sunday at noon will be hosted by Silicon Valley Pride's Hey Girl team and will serve as a "showcase for queer womxn in the community."

Silicon Valley Pride is put on by the Gay Pride Celebration Committee of San Jose Inc., and, according to the release, it is the largest such organization in Northern California, outside of San Francisco.

Silicon Valley Pride to go virtual this year
Sign up!