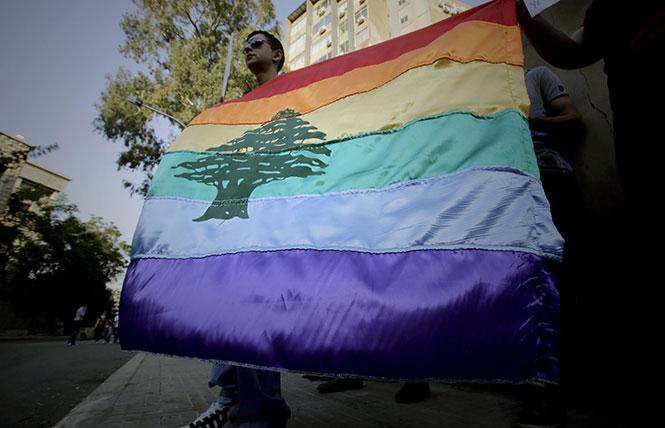 A Pride flag bearing the cedar tree in the middle of it is carried by a human rights activist during an anti-homophobia rally in Beirut. Photo: Courtesy of Joseph EID/AFP

International LGBTQ organizations and expat queer Lebanese people are raising thousands of dollars to help Beirut's queer community hard hit by the explosion at the city's port earlier this month.

The August 4 blast rocked Beirut, Lebanon's capital city, and left neighborhoods in rubble for a six-mile radius from its epicenter.

Two of the most affected neighborhoods in the blast, Gemmayze and Mar Mikhael, which were the scene of Lebanon's thriving LGBTQ cultural and social scene, were reduced to rubble in the blast.

"The neighborhoods hit hardest by the explosion were where many LGBT+ people lived, so we've been particularly hard hit as a community," wrote Bertho Makso, executive director of Proud Lebanon, the Middle Eastern country's largest LGBTQ organization, in a call for support distributed by All Out.

All Out, OutRight Action International, and Lebanese expat Daniel Nasr, who currently resides in Britain, have set up campaigns to raise funds to help LGBTQ Lebanese affected by the explosion.

All Out is a London-based global LGBTQ organization.

The explosion was caused by unsafely stored ammonium nitrate aboard an ailing Russian-owned cargo ship that made an unscheduled stop in the city six years ago, reported the New York Times.

The blast caused at least 177 deaths and injured upward of 5,000 people, according to Proud Lebanon's August 7 call for support.

Zeidan added that his team was scrambling to help queer survivors despite the organization losing its drop-in center and offices in the explosion. Some of the staff were taken to the hospital but weren't seriously injured, reported Q News.

Proud Lebanon's office was also damaged by the blast and some staff were seriously injured, reported Q News. Other staff members haven't been located, Makso wrote in the All Out fundraising call.

Many LGBTQ survivors can't return home, Zeidan told Reuters. If they do, they often face domestic violence or live in places where it isn't safe because they are queer.

"We're talking about a community that's already vulnerable to suicide, depression, and mental health concerns on a good day ... and now this," Zeidan told the outlet. "It's almost too much to bear."

The Times reported that Lebanon's government resigned August 10 following mass protests blaming officials for being aware of the danger at the port and doing nothing.

The country is suffering from the global novel coronavirus pandemic, a financial crisis, and ongoing anti-gay discrimination.

Homosexuality is illegal in Lebanon. Individuals who are convicted face up to a year in jail.

However, the Middle Eastern country is known as being somewhat more open and accepting of LGBTQ people than some of its neighbors.

An All Out anonymous donor offered to match up to $6,000 in donations to help Proud Lebanon support LGBTQ Lebanese affected by the explosion. To support Proud Lebanon, visit https://tinyurl.com/LGBTQBeirut

Nasr, the Lebanese expat, launched a GoFundMe campaign, Rebuilding Beirut with Pride and the Disaster Relief for Lebanese Transgender Community. The group has raised an estimated $17,000 for LGBTQ survivors and $70,600 for Beirut's transgender community, reported Reuters. To donate, visit www.gofundme.com/f/rebuildingbeirut

Charlene Liu, the organization's co-founder, wrote in a separate statement on Facebook that the organization, which hosted activities and the annual Pride celebration, needed to "protect the safety of its people."

"We love our community, and we are grateful for the experiences we've shared together," said the August 14 statement from the organization. "No matter what, we will always be proud — and you should be, too."

Liu and co-founder Raymond Phang did not expand upon an explanation for the sudden closure.

Reuters reported that Shanghai has lifted many of its COVID-19 restrictions.

The announcement caused a flurry of social media activity, with more than 17 million views.

ShanghaiPRIDE is China's longest-running pride organization. It launched in 2009.

Homosexuality was decriminalized in 1997. The Chinese government removed it from the list of mental disorders in 2001. However, homosexuality is still socially taboo in China.

Demonstrators called for the release of the activists and for the Polish government to denounce violence against the country's LGBTQ community.

The action brought more demonstrators out into Warsaw streets the following day.

The peaceful protesters clashed with anti-LGBTQ demonstrators and police officers dressed in riot gear who physically grabbed them and dragged them on the streets during their arrest, according to reports.

The other demonstrators were eventually released.

"We in New York and in cities and towns across the world raise our voices in protest and solidarity," Brendan Fay, a New York-based LGBTQ activist who traveled to Poland last year and organized the New York action, said in a statement to Gay City News.

Celebrities who took part included Margaret Atwood, author of "The Handmaid's Tale," and actors Ed Harris and Judith Butler. They were also among more than 70 cultural leaders who signed onto an August 17 open letter addressed to European Commission President Ursula von der Leyen.

"Homophobic aggression in Poland is growing because it is condoned by the ruling party, which has chosen sexual minorities as a scapegoat with no regard for the safety and well-being of citizens," the letter stated, reported Pink News.

The letter called upon Poland's government to stop attacking LGBTQ people, stop supporting anti-gay organizations, and to hold those who unlawfully and violently arrested the protesters accountable.

"LGBT+ rights are human rights and must be defended as such," the letter stated.

Urszula Bertin, a protest organizer draped in a rainbow flag outside of Poland's embassy in Berlin told Bloomberg News, "It's very important to show solidarity, to show that we agree with what is happening in Poland."