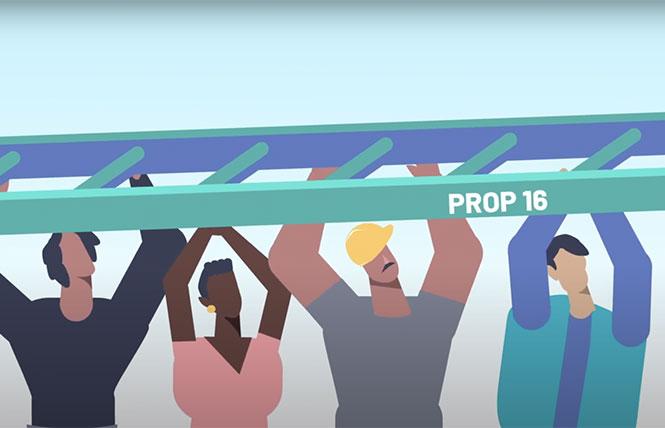 A screengrab from Yes on 16's digital ad. Photo: Courtesy Yes on 16 campaign

There are 12 state propositions on the November ballot this year, and two of the most controversial may have special ramifications for California's young people.

Proposition 16 would repeal California's 1996 ban on affirmative action in the state, which could change how universities admit students, and Proposition 18 would lower the voting age to allow some 17-year-olds to vote.

Affirmative action
The practice of considering race, sex, or ethnicity in college admissions and public contracting and employment to ameliorate the effects of discrimination, known as affirmative action, was ruled to be constitutional by the U.S. Supreme Court in the 1978 case of Regents of the University of California v. Bakke, so long as a specific quota system is not used and race is considered among a variety of factors.

Nevertheless, California voters passed Proposition 209 in 1996 to ban affirmative action in the state. Its major champion was Ward Connerly, a Black Republican activist and then-UC regent.

"Prop 209, which bans equal opportunity, has devastated our state and community, especially communities of color, for decades," Samuel Garrett-Pate, the communications director for EQCA, said in a phone interview with the Bay Area Reporter. "That's why we support repealing Prop 209 by passing Prop 16. We were proud to work with the LGBTQ caucus, the Black caucus, and the Latino caucus to make sure it reached the ballot this November. Our country is going through a reckoning with racial injustice and this is a big part of addressing racism."

"A lot of problems our communities are facing are rooted in racial injustice and we can't have race-neutral solutions to those problems," Wright said in a phone interview with the B.A.R. "The state needs to allocate resources to address those disparities."

Catie Arbona, a queer woman who is the co-chair of the Alice club, said that endorsing Prop 16 was "a fairly easy decision for the club."

"Three years ago we put a position in the policy platform calling for 209's repeal," she said. "Prop 16 allows for greater representation in hiring and education."

Also supporting Prop 16 is Assemblyman David Chiu (D), whose district covers about 60% of San Francisco, mostly in the eastern half.

"This is one I've been extremely interested in," Chiu said. "I support it because after 24 years it's clear the ban on affirmative action instituted by Prop 209 has done our state damage. The conversation about structural racism showcases how important it is to take into account racial inequities and to establish real opportunity for all."

Wenyuan Wu, the executive director of Californians for Equal Rights — No on 16, told the B.A.R. that Connerly is active in opposing the proposition. Wu said that Prop 16 is a "bandage" on deeper structural problems in the state.

"Prop 16 harms everyone by eroding the principle of equal protection for all and rejecting merit-based principles," Wu said. "Prop 16 legalizes discrimination in the name of diversity and equity. ... The authors want to increase the percentage of so-called underrepresented minorities in education, public employment, and contracting. The general goal is to have the demographics of education, public employment, and contracting mirror the demographics of California. It's a bandage that doesn't solve deeper problems such as a lack of access in K-12 education."

Wu said that many in the Asian community are concerned that if Prop 16 is passed there will be less Asian representation in the University of California system.

Chiu has heard those concerns too, he said.

"As chair of the API [Asian and Pacific Islander] Legislative Caucus, our caucus took a hard look at 209 and what it would look like to overturn it," Chiu said. "In public employment there are so many areas no one can dispute where greater diversity can help: greater African American involvement in law enforcement, more Asian American teachers, more Latinx people in medicine and health care."

Chiu said that some people mistakenly believe Prop 16 would reinstate racial quotas, which were ruled unconstitutional in the Bakke decision.

"The Asian American community has clamored for more bilingual offerings in education, more positions in higher education and in high schools," he said. "Those are necessary and would only benefit California."

Lowered voting age
Prop 18 would lower the voting age in California such that if an individual otherwise eligible to vote can cast a ballot in a November general election, they can vote in the primary election as well. This means some, though not all, 17-year-olds will be eligible to vote.

Prop 18 was endorsed by EQCA, the Alice and Milk clubs, and the California Democratic Party.

"Voting is a habit-forming behavior," EQCA's Garrett-Pate said. "We have to have engaged young people who are educated about the importance of voting and civic participation, particularly in the LGBTQ+ community, and to build political power for our community. If someone can vote in the general election, there's no reason not to allow people to vote in the primary, which is a huge part of figuring out who is going to be elected in the general."

"Prop 18 allows for young voters who are going to be able to vote in the general election to have a say on who they will be voting for," Arbona said. "We supported letting 16-year-olds vote when it came up on the local ballot."

She was referring to 2016's San Francisco Proposition F, which would have allowed 16-year-olds to vote. It was not passed by voters. A local measure similar to Prop 18 is on the ballot this November.

Wright of the Milk club said he it'd be his preference for Prop 18 to be closer to the San Francisco measure.

"I wish it went further," Wright said. "Prop 18 is not groundbreaking. It's not a radical idea. Eighteen states and the District of Columbia allow 17-year-olds who will be 18 by the time of the general election to vote in the primaries."

Chiu said more young people would vote if they could get into the habit before 18, a tumultuous age for many young adults amid graduating high school and starting work, college, or military or foreign service.

"I have been a strong supporter of the Vote 16 effort in San Francisco; they're obviously related," Chiu said. "We know if a person starts voting at a young age he or she establishes it as a habit. We need to engage our younger people in political discussions and it's far better to get people registered and in the habit before 18 because people who are 18 often leave their parents house and are doing other things for the first time and are less likely to vote."

Prop 18 is opposed by the Election Integrity Project California, which gave a written statement to the B.A.R.

The project stated that 17-year-olds should not be voting because they are "captive audiences in school" and thus susceptible to their teachers' and counselors' opinions, because they are not legal adults who can enter into contracts and because they may "provide the margin to approve new debt and taxes that will greatly burden their parents and all taxpayers."

"Both the federal and California governments have set the age of legal responsibility at 18," the statement reads, in part. "Everyone has the right to express an opinion, advocate on issues, organize like-minded people and volunteer on campaigns. The right to vote, however, is reserved for citizens who are state residents, who are not felons in prison, and who are at least 18 years of age on Election Day.

"Voting is a serious responsibility. In California elections, voters decide who will hold the power to make and enforce laws, whether to approve new debt that taxpayers will have to pay, whether to raise taxes, and many other complex issues," the statement reads. "Important decisions must be made by voters who are legally adults, not by high school minors."