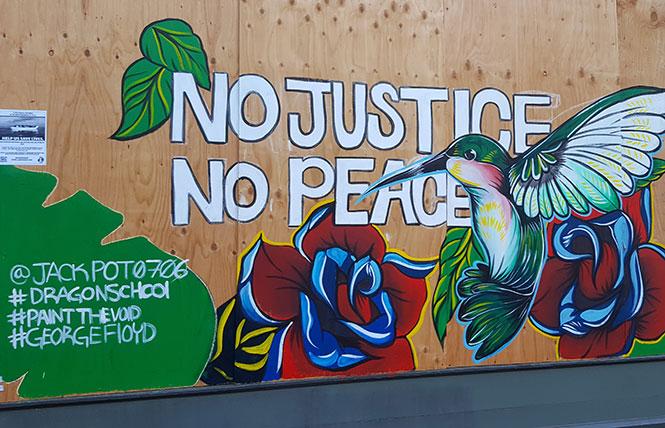 A mural was created on Broadway in Oakland after the Black Lives Matter protests earlier this summer. Photo: Cynthia Laird

As a teenager starting to discover who I am, I'm also discovering the world and its problems. This past year, I figured out that I identify as gender fluid. It was long and confusing to get there. I wasn't exposed enough to even know the choices, and it took effort to find the labels that felt comfortable so that I didn't have to explain everything so much every time. Now that I've figured it out, it gives me a level of comfort. It's easier. I have words to tell the world how I feel on the inside.

While discovering a lot about myself over the past few years, I was also learning about racism, civil rights, and the LGBTQ+ rights movements — current and historical. It was during a project at school supported by World Savvy, a nonprofit that works with thousands of teachers across the country to prepare students for complex, real-world challenges, when I began to think about the intersection of the struggle for equality by race, gender, and sexual identity. I realized that people are being oppressed locally and globally for things they cannot change, something that they are born with.

Near the beginning of the 2019-20 academic year, I noticed that my school wasn't having enough conversation on LGBTQ+ topics so I started a club for people in the LGBTQ+ community to talk to others who have had similar experiences. When we started distance learning in March, I continued to lead the club online because I knew many of the people in it were not out at home, or weren't in supportive environments, and I wanted to continue to give them a space to be themselves. Fostering an inclusive space felt even more important than it already was because we were all stuck at home. Our conversations in the club were usually just normal everyday socializing — we would talk about class, we helped one of the members come out to his parents, we watched LGBTQ+ movies, whatever we wanted to do as long as we were with people who understood. I really tried my best to make the club completely confidential, a safe space to be yourself without judgment.

When I started the club online the conversations touched on the coronavirus and, when the Black Lives Matter movement sparked up, we started talking about the protests and racism. One of the members of my club who had gone to an Oakland protest was tear gassed for peacefully protesting. Although I had already heard many things on the news, it felt more real hearing about it from someone I know. The news had portrayed the protesters as violent instigators for looting, rioting, and "destroying the country." I tried to listen more to what people I know were saying because the media can twist things up, and we often connect more easily with an issue when we hear about it from someone familiar. In that same vein, I hope that being open about my gender fluid identity helps others understand not just me, but gender constructs, a little bit more.

By the end of the school year, I started coming to my Zoom classes with a Pride flag on one cheek and BLM on the other, and I signed any petitions I could find. On Friday, April 24, I participated in the "Day of Silence" hosted by GLAAD. Most of all, I tried my best to spread the message that I support these two movements and their similarities as much as I could by talking to friends and using social media.

It was online that I realized how many people of the LGBTQ+ community aren't supporting the Black Lives Matter movement because "violence isn't the answer." There is some truth in that statement; I think that violence is a last resort, but since the first ship of enslaved people arrived in the U.S. in 1619, Black people have been oppressed, and they have a right to be angry, express their outrage, and question the effects of merely protesting peacefully. Furthermore, how can there be peaceful protests while police are escalating violence? Martin Luther King Jr. said in his Letter from Birmingham, "The purpose of ... direct action is to create a situation so crisis-packed that it will inevitably open the door to negotiation." Protests and boycotts he led resulted in police brutality, the firebombing of his home, police using high-pressure water hoses and dogs on protesters, some of whom were children. His protests also led to the Civil Rights Act.

The modern movement for LGBTQ+ rights, inspired by the Black and women's rights movements, began with the 1969 Stonewall riots, which were led in part by a Black trans woman, Marsha P. Johnson, and a Latinx drag queen, Sylvia Rivera. The riots began after the Stonewall Inn was raided by the police, which triggered the LGBTQ+ community to resist the officers.

I personally agree with rioting and looting when peaceful protests aren't working; Black people have been oppressed for so long and people are sick of just standing with signs while more Black people are getting killed and/or harassed because of the color of their skin. So for all the people in either the Black community or the LGBTQ+ community, I ask you to look at each other and your similarities and struggles and build each other up, not tear each other down. We'll get farther when we march together.

Délara Shadfar is 13 years old and will be entering eighth grade in the fall at Ecole Bilingue in Berkeley, California.