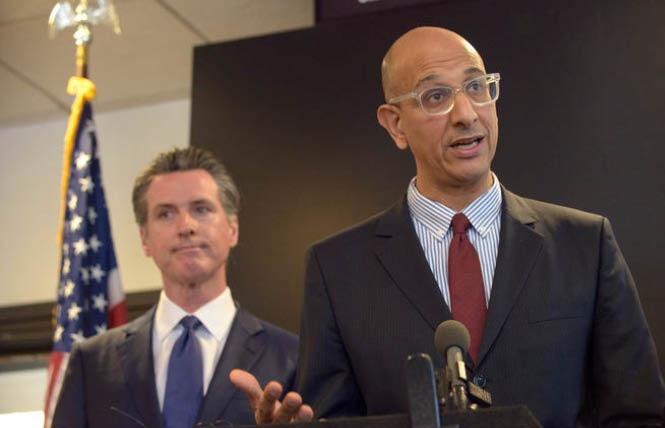 California will now be requiring health care providers and local health departments to report data on the sexual orientation and gender identity of COVID-19 patients, according to a July 28 news release.

The new regulations were announced Tuesday by Dr. Mark Ghaly, secretary of the California Health and Human Services Agency.

The bill now awaits a vote in the Assembly.

SB 932 originally would have required SOGI data reporting only on COVID-19 before it was amended to cover all reportable diseases.

In a statement Tuesday, Wiener said that the LGBTQ community "has suffered a long history of government neglect when it comes to our health care system" and that Ghaly's order is an important step in remedying that.

"I want to thank the state for listening to the LGBTQ community — namely, LGBTQ advocates and the California Legislative LGBTQ Caucus — and responding by enabling this data collection moving forward. It's a deeply important and promising first step and I am grateful for Governor Newsom's leadership and allyship," Wiener said.

"This is just the beginning. SB 932 is more important than ever, because we must codify this change into law. This data collection, not just for COVID-19 but for all reportable communicable diseases, is essential to ensure that our community gets the resources it needs moving forward," Wiener added. "We can't keep leaving the LGBTQ community behind when it comes to public health. California can and should lead the way in giving the LGBTQ community the health justice it deserves."

Chiu wrote in a statement July 28 that he is happy to see the data finally being collected.

"As reflected in prior SOGI laws, this data is crucial to identifying and reducing disparities among our LGBTQ communities," Chiu stated. "Having this data reported for COVID-19 outcomes and other diseases will be invaluable for keeping all of our communities safe and healthy, which is why I strongly support efforts to make this data collection permanent."

LGBTQ activists nationwide have been pushing for months for the SOGI data of COVID-19 patients to be asked and reported after medical experts began warning that LGBTQ people might be at particular risk from the virus due to a number of factors.

Some electeds indicated that they were hesitant to mandate asking for SOGI data, such as gay Colorado Governor Jared Polis (D) and New York Gov. Andrew Cuomo (D). In May, Philadelphia Gay News reported that Pennsylvania Governor Tom Wolf (D) announced the state health department would begin collecting SOGI data for those who test positive for COVID-19.

On May 13, Governor Gavin Newsom indicated he was supportive of SB 932 but did not say that the state's executive branch would act unilaterally to collect SOGI data, in response to a Bay Area Reporter question submitted to Newsom's then-daily afternoon news conferences.

"I've been very clear that we want this information to be forthcoming. We've been in touch with Scott Wiener, who's been an outstanding leader in this space, and have been in contact with the LGBT caucus on this," Newsom said at the time. "I'm very deferential to the work Scott Wiener is currently doing. Nobody wants to see this information more than (state public health director) Dr. Sonia Angell."

In a statement July 28, Angell said that the SOGI data will help officials have a fuller picture of where and how COVID-19 is impacting the state.

"Complete data is essential to addressing health inequities and better designing public health interventions that save lives," Angell stated. "These changes apply to COVID-19, and all reportable diseases, to help us understand their impact by race, ethnicity, gender identity and sexual orientation."

The B.A.R.'s question and Newsom's response came after activists were critical of Newsom's lack of action on the issue during a call with reporters earlier that day.

"This is a really urgent issue. In my six years as director of Equality California this has truly been the biggest, most urgent, and troubling wake up call I have experienced," Rick Chavez Zbur, the executive director of EQCA, said that day. "In 2020 in the state of California, we literally have to beg our government and public health officials to collect information to protect the health of LGBT people."

"We appreciate that the governor, his staff, Dr. Ghaly and Dr. Angell understood the urgency of this problem and worked to ensure that this critical data is collected and reported," Zbur stated. "This data will finally give our government, our public health leaders, and our community an understanding of the degree to which this pandemic is devastating LGBTQ+ people — and what steps need to be taken to save lives."

"Today's victory also highlights the need for the Legislature to pass and the governor to sign Senator Wiener's SB 932, which will codify these data collection requirements for every existing reportable disease and any new threat to our community's health and well-being that may emerge," Zbur stated. "We must never allow a vulnerable community like ours to be ignored or erased again."