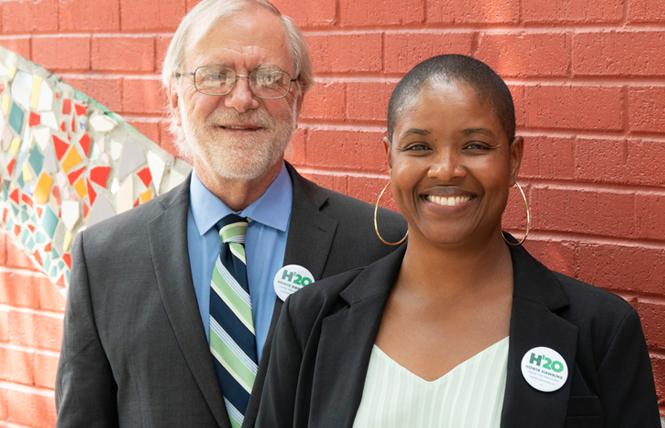 In addition to battling for the attention of both the media and voters while their barnstorming is constrained due to COVID-19, Green Party presidential candidate Howie Hawkins and his running mate Angela Walker, who is bisexual and was the Socialist Party's vice presidential candidate in 2016, are also fighting to get onto the fall ballot in all 50 states.

As of this month, the Green Party had guaranteed its candidates would be on ballots in 25 states, including California, and in Washington, D.C. They account for more than 300 Electoral College votes, so enough to win the election.

Nonetheless, the party is waging court fights in a number of the remaining states to get on their November ballots. In other states it is asking election officials to rescind requirements that they gather signatures in person from a certain threshold of voters due to the health crisis.

"In this coronavirus pandemic, we are appealing to state governments to let us get on the ballot other than having to physically gather petition signatures, which is against public health guidelines," said Hawkins during a recent video interview with the Bay Area Reporter. "The response varies state to state."

In Vermont, for instance, state officials allowed the Greens ballot access since the party had done so in past elections, said Hawkins. Other states, like Maryland and New Jersey, he said granted permission for the party to submit digitally gathered signatures. But the party has had to go to court in other states, such as Illinois, Indiana, Arizona, and Oklahoma, to ensure its candidates are included on the ballot.

"One of the complications of running for president as a third party candidate is you have to worry about getting on the ballot. It is a big job," noted Hawkins, who was his party's gubernatorial candidate in New York the last three election cycles for that office.

Hawkins, 67, was born in San Francisco and grew up in San Mateo. Drafted into the Vietnam War in 1972, he enlisted with the Marine Corps. He left the Bay Area for Dartmouth College in Hanover, New Hampshire, and ended up staying in New England.

In 1984, he helped form the Green Party. Hawkins is now retired from his Teamster job unloading trucks for UPS and lives in Syracuse, New York, which he has called home for nearly 30 years.

Walker, 46, grew up in Milwaukee in a working-class Black family and moved to Jacksonville, Florida, in 1993 with her daughter, Epiphany. She studied education then history at a local university before dropping out in 2001 to become a school bus driver.

In 2009, Walker returned to her hometown in Wisconsin and landed a job with the local transit system. As a member of the Amalgamated Transit Union Local 998 Walker took part in the protests against then-governor Scott Walker and his anti-labor policies, leading her to be hired as her union's legislative director.

She ran unsuccessfully for sheriff in 2014 and, following the last presidential election, relocated to Florence, South Carolina. Now a grandmother of five, Walker works as a dump truck driver. It was her bid for sheriff that first brought her to the attention of Hawkins, as they were invited that year to speak on the same panel by a New York socialist group.

"I don't think I told her then, but I was very impressed. She speaks very well and very clearly with a conviction you can feel," recalled Hawkins, adding that when the socialists tapped her four years ago, "I said, 'Damn! The Greens let her get away.'"

Walker was at the top of his list for potential running mates, and in April Hawkins reached out to ask her to join his ticket.

"I was sitting here minding my own business," joked Walker, admitting she at first thought Hawkins was calling to seek her endorsement. "That was not what he asked for."

His platform's focus on environmental issues appealed to her — their campaign tagline is "We want an Ecosocialist Green New Deal!" — and she was impressed by Hawkins' convictions on myriad issues. She also saw his invitation as a way to press for passage of the Equality Act, the federal legislation that would end discrimination against LGBTQ people in numerous areas like housing and employment.

"Making sure it has teeth in it so all of us on the rainbow are protected and it is codified into law so we can not be discriminated against because of who we are, that is a big one for me," said Walker.

Her only hesitancy in being his running mate, said Walker, stemmed from having to return to the public spotlight. She had been enjoying being out of the limelight in her small Southern town.

"The hesitation came from the fact I am an introvert. I live a really quiet life on purpose. I don't necessarily enjoy the exposure of being a candidate, though I know how to handle it," said Walker. "Anyone else than Howie, I would have looked at them as stupid. But I know him and his character and integrity, so my hesitation was just on apart of I am going to be out front again."

As for seeking the White House as an out candidate, Walker said that precedent has already been set by past candidates, most recently Pete Buttigieg, the gay former mayor of South Bend, Indiana who had sought the Democratic Party's presidential nomination this year.

"I think because there are so many people who are on the rainbow and who are running for office, it's not something I feel like I am in a special box," said Walker, adding it would be interesting if lesbian Wisconsin U.S. Senator Tammy Baldwin is picked as the running mate of former vice president Joseph R. Biden Jr., the presumptive Democratic presidential candidate. "She is somebody I have respect for."

As for the contention their candidacies will steal votes away from the Democratic ticket and hand President Donald Trump a second term, Hawkins and Walker said the Democratic Party would have no one to blame but itself should its candidates lose. There is a solution, noted Hawkins, to ensuring the winner of the popular vote becomes president.

"We should replace the Electoral College with ranked choice and go by the popular vote for president. But the Democrats, they don't embrace that. They don't talk about it," he said. "Instead, they try to keep us off the ballot. Party suppression is a form of voter suppression."

He pointed to exit polling that found 60% of the people who voted for the Green Party's presidential candidate in 2016, Jill Stein, would have just stayed home had she not been on the ballot. They would not have voted for Hillary Clinton, the Democrat's candidate four years ago, he said.

"So we bring new voters to the polls," said Hawkins. "A vote for the Green Party ticket is a vote against Trump. It is not a vote in his column, it is a vote in our column."

Ranked-choice voting, used in local races in cities like San Francisco, Oakland, and Berkeley, should be adopted nationwide, argued Hawkins.

"I have put it to Joe Biden, why don't you embrace that and solve the spoiler problem. That way, people can vote for the candidate they like the most," he said.

Walker said she understands why voters are afraid about the impact their choice on the ballot will have this year.

"There is a lot of trepidation about this individual — I refuse to say his name - retaining this office and the people who follow him," she said. "I give the same answer that Howie does, it is the Democrats' fault. If you continually nominate unpalatable, unelectable candidates that people don't like, you can't chastise them when they don't show up to vote."