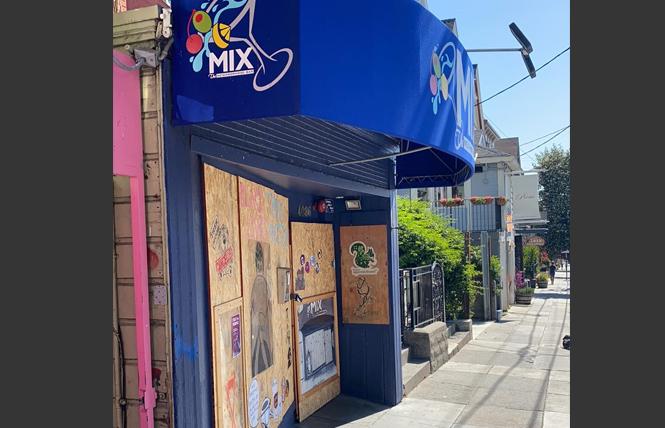 A shareholder of The Mix sued his business associates in 2019, and last month they filed a cross-complaint in court against him. Photo: Jose Ruiz-Wilbert

The corporation that does business as The Mix, a Castro neighborhood bar, filed a cross-complaint last month against Lawrence "Larry" Metzger, who sued the corporation and two of its shareholders in October 2019.

The cross-complaint, filed in San Francisco Superior Court, alleges that Metzger issued unauthorized checks of The Mix's assets to himself, exercised personal control over its property, breached his fiduciary duty to the corporation by accepting a position at a rival business, and even sold The Mix's alcohol there.

As the Bay Area Reporter previously reported, Metzger is one of four owners of The Mix, located at 4086 18th Street, along with Ross Crum, Virginia Crum-Ross, and Linda Holl.

Last September, Crum fired Metzger from his duties as a manager of the bar, in what the latter claimed was a breach of contract in an October lawsuit against The Mix, Crum, and Crum-Ross that alleged five other causes of action. These included that Crum removed an obligation of $175,000 owed to Metzger by The Mix (referred to as TDG Inc.) between 2016 and 2017 "at his sole discretion, without any information or consent of plaintiff or approval of the board of directors," according to the initial court filing from Metzger's attorney.

On June 22, The Mix filed a cross-complaint alleging five of its own causes of action.

The court filing states that before 2015, Metzger attempted "to use an unauthorized rubber stamp of Crum's signature to forge documents and transfer additional ownership properties in TDG to himself." This matter was resolved with an agreement that assigned percentages of the ownership shares to the four owners and made Crum the president and Metzger the vice president of The Mix.

Subsequently, "TDG discovered that Cross-Defendant Metzger continued a pattern or practice of improperly using TDG assets for his personal benefit." Specifically, Metzger issued three checks to himself from The Mix in the amount of $18,000 "without the knowledge or consent of other TDG shareholders or directors," the filing states. At least one of those checks had been intended to pay The Mix's "routine vendor bills."

Diaz, 29, was sentenced to four years and four months of incarceration in May on charges stemming from a 2018 incident when he allegedly lit a homeless person on fire. In November 2019, Diaz pleaded guilty to arson, possession of an incendiary device, and vandalism.

Diaz has been prosecuted for arson and other charges in recent years. In 2014, Diaz stood trial for the June 2011 death of Freddy Canul-Arguello, 23, in Buena Vista Park. During the trial, Diaz testified that Canul-Arguello had asked to be choked during a sexual encounter and that he'd accidentally killed him.

But after his release in the Canul-Arguello case, Diaz was again arrested in 2015 after he was alleged to have started a series of fires in the Castro district, including at the Up Hair salon on 18th Street, adjacent to The Mix.

Diaz pleaded guilty to possessing an incendiary device in 2016 and was then made to register as an arsonist. Two months later, Diaz was again arrested for assault, battery, and false imprisonment after allegedly biting off a chunk of a man's scalp and handcuffing another man while impersonating a police officer outside of a South of Market nightclub.

The Mix's court filing states that Diaz and Metzger lived together in 2015 when Diaz allegedly set fire to the hair salon, which led to The Mix having a criminal protective order to keep Diaz away.

"Metzger's association with Diaz caused TDG to pursue additional safety measures, such as security personnel to protect TDG's facilities, TDG employees, and the general public," the filing states. "Local print and internet media, including the Bay Area Reporter, Hoodline, and SFist, reported on the situation. Upon information and belief, this caused harm to TDG's reputation, including public calls to boycott the bar, as well as a diminution of bar traffic and sales, thereby causing economic injury.'"

Hamburger Mary's
Metzger accepted a position as general manager of Hamburger Mary's, a restaurant at 531 Castro Street, in 2017, according to SFist. As the Bay Area Reporter previously reported, the Hamburger Mary's chain had originated in San Francisco's South of Market neighborhood in the 1970s but that original location closed in 2001, leaving the franchise without a location in its birthplace until 2018 when it opened again on Castro Street. Metzger has no ownership stakes in the franchise.

The filing does not mention Hamburger Mary's by name.

"Metzger escalated his conduct detrimental to TDG and began working for an unrelated business and competitor, a bar and restaurant located fewer than two blocks from SF Mix, as the competitor's on-site manager," the filing states. "At the time of this competitor's 'grand opening,' on or about March 10, 2018, Cross-Defendant Metzger unilaterally and without the knowledge or consent of other TDG shareholders, caused SF Mix employees to transfer several cases of distilled spirits from SF Mix's alcohol inventory to the competitor, for sale to the general public and consumption at the competitor's premises. SF Mix is not licensed as a distilled spirits wholesaler nor was it reimbursed for the expense of lost alcohol believed to be at least several hundred dollars."

According to the filing, Metzger bought table linens for the competitor through The Mix's business account.

The filing also accuses Metzger of submitting an inaccurate invoice to The Mix's insurance company, of installing a carbon dioxide enrichment system for beverage dispensing without a permit, "order[ing] various plumbing and sewer upgrades to SF Mix or to benefit Cross-Defendant Metzger's personal residence," establishing an Aflac supplemental insurance policy with premiums paid from a Mix bank account, and not allowing the co-owners to see the video surveillance system and certain business accounts, among other allegations.

Response
Neither side of the suit commented on the record for the November 2019 story in the B.A.R., but attorneys for both sides sent emailed statements to the paper following this cross-complaint.

Metzger's attorney Mahsa Hakimi wrote to the B.A.R. late July 14 that their next steps will depend upon the discovery process.

"At the moment we don't have any comment or update as we are still in discovery phase of this case. Due to COVID-19 the process has been delayed and defendants have just recently filed their responses to our lawsuit. At the moment everything about this case is included in our filings and our next steps will depend on the outcome of the pending motion and discovery," Hakimi stated. "Thank you again for following up on this and hopefully we have more to share after discovery is completed."

John Hendricks, an attorney for The Mix, wrote July 13 that its case "dovetails with its reputation as the Castro's favorite neighborhood bar."

"California's compulsory cross-complaint statute requires The Mix to assert its claims now, when it is answering Mr. Metzger's complaint. The Mix has been dealing with persistent issues with Mr. Metzger's conduct for years. By running to court, he inevitably caused his own wrongful pattern and practice to be revealed," Hendricks wrote. "The Mix's case is straightforward and dovetails with its reputation as the Castro's favorite neighborhood bar. We stand by the allegations in the cross-complaint and look forward to vindicating The Mix in court."