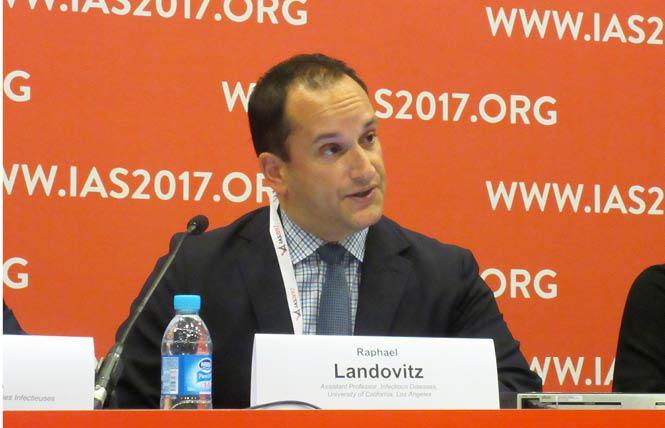 The conference was supposed to have been jointly hosted by San Francisco and Oakland, but it was switched to a virtual format due to the COVID-19 crisis.

A large clinical trial (HPTN 083) sponsored by the National Institute of Allergy and Infectious Diseases enrolled nearly 4,600 HIV-negative gay and bi men and transgender women who have sex with men in several countries, including the United States.

NIAID announced interim results from the study in May. At that time, 12 people receiving cabotegravir injections and 38 people taking Truvada had newly acquired HIV. Although there were substantially fewer seroconversions in the cabotegravir group, the difference did not reach the statistical threshold for declaring that the injections worked better than Truvada, leading the researchers to conclude that the injectable method was "non-inferior," or at least as good.

Now, with further follow-up, there have been 13 new infections in the cabotegravir group and 39 in the Truvada group. This translates to annual incidence rates of 0.41% versus 1.22%, reflecting a 66% lower risk of infection with cabotegravir injections, lead investigator Dr. Raphael Landovitz of UCLA reported. At this point, the researchers can say that cabotegravir was actually statistically superior to Truvada.

This is an impressive finding because daily Truvada is more than 99% effective in reducing HIV risk when taken consistently. But some people find it difficult to take the pills every day. In a subset of study participants who underwent testing to monitor levels of the drugs in Truvada, only three-quarters had levels as high as would be expected if they took the pills each day.

Both cabotegravir and Truvada were generally safe and well-tolerated. Study participants who received cabotegravir were more likely than those who received placebo shots to report pain and tenderness at the injection site (81% versus 31%, respectively). However, these local reactions became less frequent over time and only 2% of cabotegravir recipients stopped the injections for this reason.

Based on the findings released in May, the study's independent data and safety monitoring board recommended that the randomized portion of the trial should be stopped ahead of schedule and everyone should be offered the injectable regimen.

A companion study (HPTN 084) of long-acting cabotegravir injections for cisgender women is currently underway in Africa. The data safety and monitoring board also reviewed interim results from that study, which started a year later, and recommended that the trial should continue.